There could be several liable parties in a train accident lawsuit. Here’s how to know who’s at fault.

Table of Contents + show
There could be several liable parties in a train accident lawsuit. Here’s how to know who’s at fault.
Train accident statistics
Types and causes of railroad accidents
Preventing or avoiding a train crossing accident
Who is responsible for a train accident?
Injuries to railroad employees
Claiming damages for a Tennessee train accident
It’s unusual to be injured when you’re a passenger on a train — overall, it’s a very safe way to travel. Most train accident injuries happen because a driver collided with a train while crossing the tracks, or because a pedestrian or bystander got too close. These are preventable accidents. Here are tips for staying safe and what to do if you do become injured in the Volunteer State.

It’s safe to say that you weren’t alive when one of the most devastating train crashes in U.S. history happened in Nashville, but you might have heard about it. Country music artist David Allan Coe even wrote a song about it—“The Great Nashville Railroad Disaster,” which was included on his album in 1980.

The Great Train Wreck of 1918 resulted in the deaths of 101 people (though some reports said the number was 121) and 171 people injured. The No. 4 train, operated by the Nashville, Chattanooga, and St. Louis Railway (NC&StL), departed Nashville for Memphis around 7 am on the morning of July 9th. The No. 1 train was running about 30 minutes late for its scheduled arrival in Nashville from Memphis at 7:10 am.

The trains collided head-on in an area that’s known today as Belle Meade. Each train was traveling around 50 to 60 miles per hour and many of their wooden cars were destroyed on impact. The cause was determined to be errors made by operators of the No. 4 train and the tower operators, who apparently didn’t account for the other train on the tracks. Following the wreck, most railroad lines began to switch to passenger cars made of all steel.

Today, a train accident with more than 100 fatalities is much less likely because of improved technology, safer trains, and modern systems for travel logistics. That’s why the 1918 wreck is still the deadliest train accident in American history more than a century later.

The Great Train Wreck of 1918 in Nashville, Tennessee is still the deadliest train accident in U.S. history—more than a century later. Tweet this

Take a look at these figures from the Federal Railroad Administration: 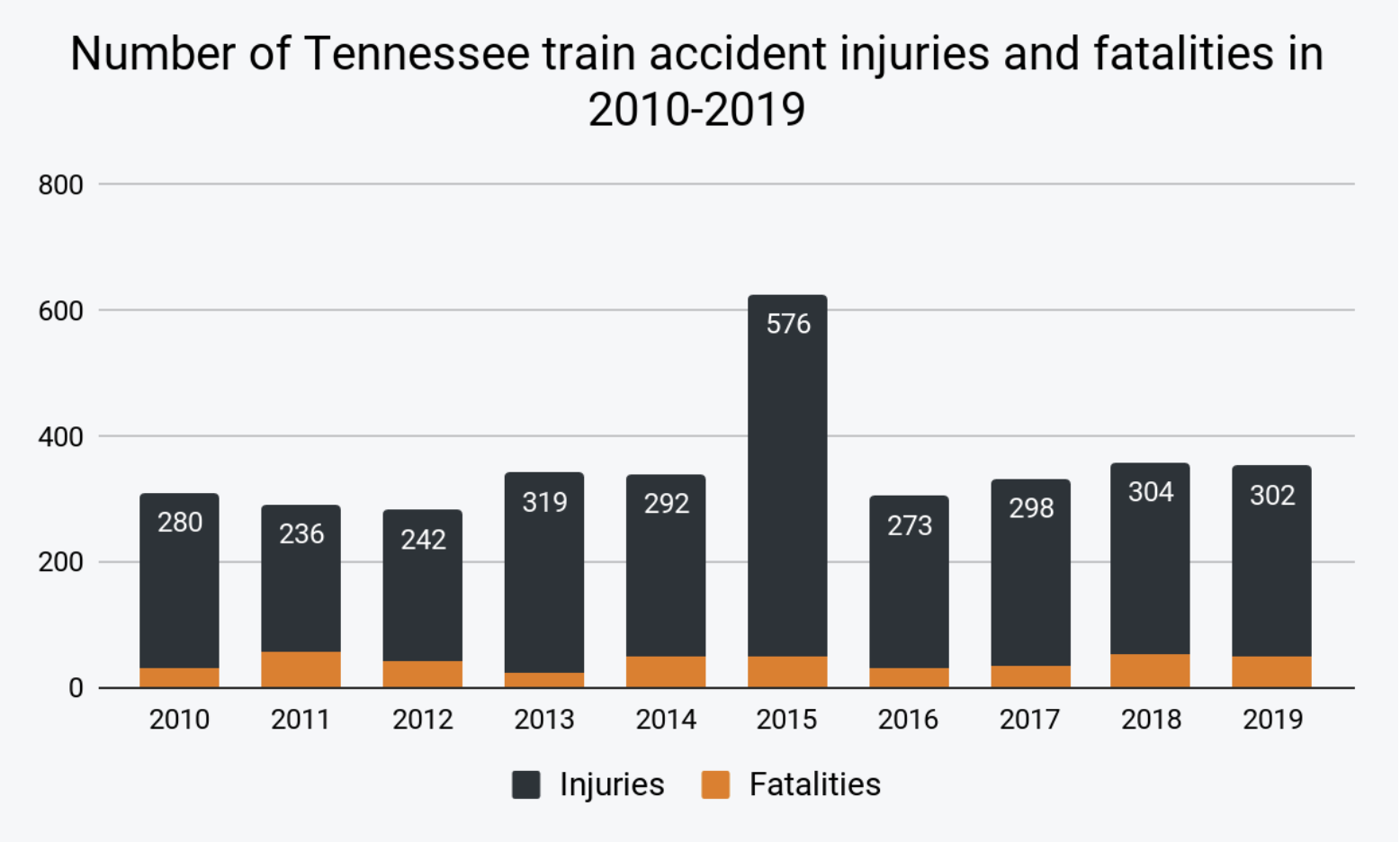 You can see that there are far fewer fatalities than injuries. The second interesting part of these data is that the figures represent any reported injury related to the railroad.

The figures below more closely represent how and why people were injured — and it’s clear that the vast majority of railroad injuries are not related to crashes and don’t affect passengers. 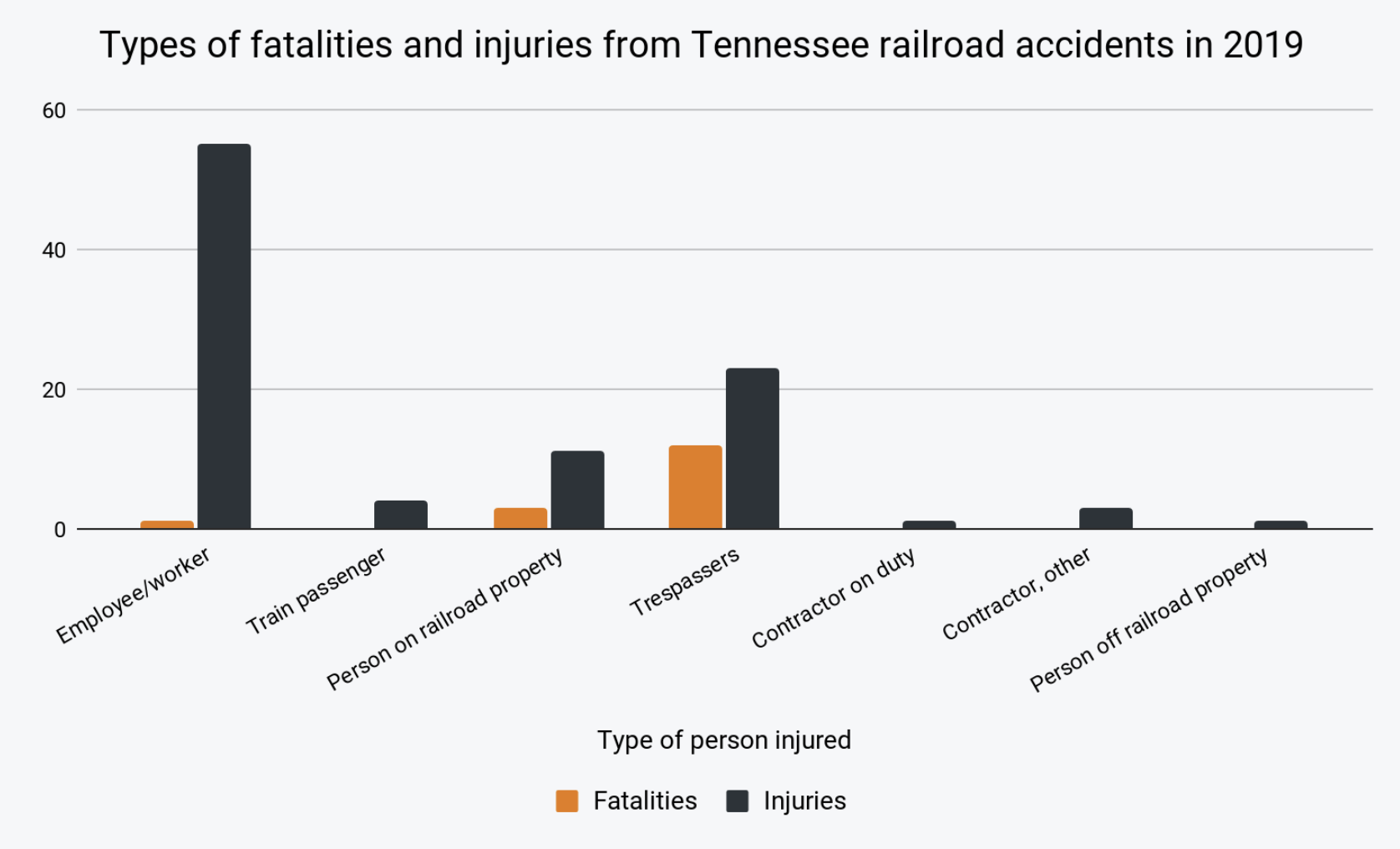 The highest reported numbers were for injuries to railroad workers and trespassers, followed by fatalities to trespassers. Trespassers are people who were on the railroad tracks when and where they didn’t belong.

Enjuris tip: While you probably can’t prevent a train accident if you’re a passenger, you can prevent an injury by staying clear of the tracks and following traffic signals if you need to cross.

Types and causes of railroad accidents

The most common causes of train accidents include:

You’re probably more likely to be involved in a train accident because of a negligent car driver than because of a derailment or other incident where only the train is involved.

Here are 5 of the most common causes of train accidents and injuries at railroad crossings :

Whether you’re a driver or a pedestrian, it’s important that you’re always aware of where a railroad crossing is and how to avoid an accident.

Here are 5 tips for avoiding a train accident as a driver or pedestrian:

The majority of trains carry cargo or freight that might include toxic chemicals or flammable gases or fluids. Even if there isn’t a large collision, there’s always a possibility of a chemical leak. Even if you’re certain that you’re far enough away from the train to be physically hit, it’s important to keep your distance in order to stay safe from exposure to toxic substances in the event of a leak.

It might be tempting to walk, bike, jog, walk your dog, ride a motorcycle, take photographs or engage in other activities near train tracks because, for the most part, there aren’t other people around. But avoid this area.

If you are in the vicinity of a train track, remove your earbuds or headphones. A train can be loud, but when coupled with other ambient noise you can miss hearing it, especially if you’re listening to something else and distracted. Many railroad fatalities happen because of people using train tracks for these reasons and they don’t see or hear the train approaching.

Consider the size and weight of a train as opposed to your car. There’s no question that the train would fare better in a collision than a passenger car or truck.

Next, think about the amount of time it takes your car to stop. The typical car traveling at 55 miles per hour would require about 300 feet to come to a full stop. A train, on the other hand, takes far more time and a longer distance to stop, in part because the engine has hundreds of thousands of additional pounds behind it. By the time the conductor sees a car or person on the train tracks, it’s likely already too late to stop a moving train before a collision.

4. Don’t rely on how far away you think the train is.

Visual distance indicators might be misleading. A locomotive is a streamlined object, which means it gives the appearance of being farther down the track than it actually is. If you see or hear a train, stay away from the tracks until it has passed, even if you believe it’s far enough away that you could cross in time.

Maybe your home is near the train tracks and you hear the whistle reliably each day at 3 pm. Or perhaps you routinely cross the tracks as you head to work and you’re certain you know when to expect the train. While the train schedule might be fairly regular, there are a variety of reasons why it might change — weather, loading issues, personnel changes, etc. Always be cautious and check for a train approaching, even if you don’t think it’s the right time.

Who is responsible for a train accident?

A “common carrier” is a transportation company that carries people or property from one location to another. Common carriers have a duty to keep passengers safe.

You might be familiar with Tennessee’s passenger lines such as the Music City Star commuter rail service that runs from Nashville to Lebanon, and Amtrak, which is a national train operator for long-distance travel.

But there are also dozens of commercial freight carriers that are either based in Tennessee or travel the railway through the state.

A train operator is either a private company or a public (government-run) agency. Every train operator, regardless of legal status, must follow strict state and federal safety regulations.

Some regulations include limits on the number of hours a train operator may work without a break in order to allow for adequate sleep and to curb the risk of nodding off at the controls, along with other safety regulations. But not every operator follows the rules and fatigue can be a big problem.

Each railroad company is responsible for:

If an accident happens, the investigation would focus on whether someone was negligent. “Negligence” would involve a person or entity that breached their duty of care, and that breach resulted in injuries.

Liability could be on the train operator if the accident was the result of negligence by one of its employees or system failure. But there are also other parties that could be liable, including:

Almost everyone in this country who’s employed by another person or company is covered for work-related injuries under workers’ compensation insurance. This coverage applies whether you work for a small business, a large company, or a government agency.

But there’s one exception: People who work for the railroad.

If you’re a railroad employee who has been hurt on the job, you’ll need to file a lawsuit or claim under FELA. Unlike workers’ compensation, a FELA lawsuit requires the injured worker to show that the railroad company was negligent and that negligence caused their injury.

If you’re involved in a train accident, there are 3 legal questions that you need to ask before pursuing a claim:

You can claim damages if your injuries cost you money. If you were a passenger on a train that was involved in an accident and you weren’t injured, or if your injuries were minor like small bumps or bruises, you can’t make a claim if your injuries didn’t require treatment or cost money.

Enjuris tip: The statute of limitations on a Tennessee train accident is 1 year from the date of the accident. The court can refuse to hear a case filed after the deadline.

If you or a loved one were seriously injured, you can claim damages to recover costs for items that include:

Enjuris tip: In a wrongful death case, you can recover expenses related to the deceased person’s medical expenses, funeral and burial costs, loss of wages, and sometimes punitive damages.

Because of the complicated legal situation around federal and state regulations, potential liable parties, and other issues, it’s important to call a train accident lawyer immediately if you think you have a claim.

But beware of one thing:

Most train accidents are newsworthy because they’re so rare. Especially if it’s an accident that resulted in a high number of injuries or fatalities, you might have lawyers come to you to offer to take your claim after they’ve seen the accident on the news.

In Tennessee, it’s not only unethical but also illegal for a lawyer to reach out to you and ask to handle your case (with a few exceptions, such as if the lawyer is a family member or close personal friend, or if you’ve already engaged their services).

You might not be eager to search for an attorney as you’re recuperating from an injury, but doing so will help you to recover costs for your medical treatment, lost wages, and future related expenses.

These Enjuris resources can help you find a Tennessee lawyer who is experienced, empathic, and ready to handle your train accident lawsuit: