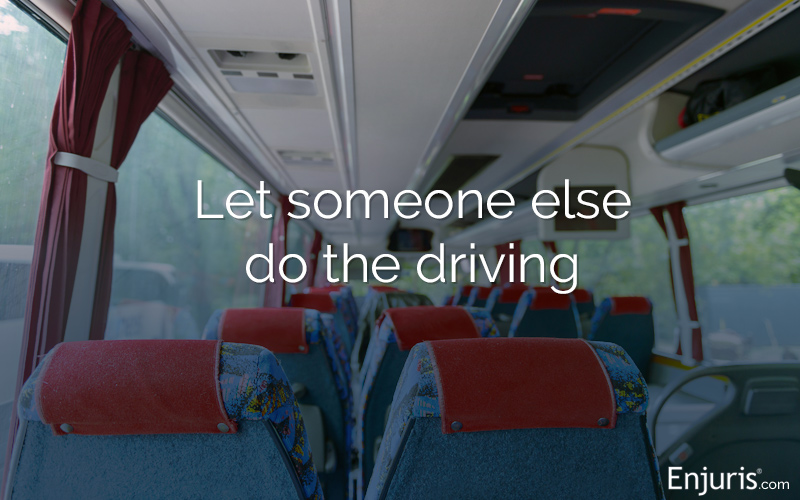 A bus accident is almost never the passenger’s fault, and you’re entitled to recover damages if you were injured.

Table of Contents + show
A bus accident is almost never the passenger’s fault, and you’re entitled to recover damages if you were injured.
Public and private bus travel in Tennessee
Common causes of bus accidents
Liability for a Tennessee bus accident
Damages for a Tennessee bus accident
Bus safety tips
A bus accident in the Volunteer State can lead to more complex lawsuits than recovering damages for a car crash. For one thing, it’s more complicated than “have your insurance company call my insurance company and we’ll sort it out.” There could be several liable parties involved.

Negligence is at the heart of every personal injury lawsuit. A person (or entity, like a business or government agency) is negligent when their behavior (an act or omission) breaches a duty to someone else and causes that person to be injured.

It’s not hard to meet the threshold for “duty.” You can have a duty to someone you’ve never met. In fact, any road user has a duty to any other person on the road — a motorist, bicyclist, pedestrian, road crew worker, or any other person using the road. The duty is simply to avoid causing harm to that person, whether intentionally or unintentionally.

Tennessee follows a comparative negligence law. Under comparative negligence, each person involved in an accident is assessed a percentage of liability. In other words, each individual has a percentage for which they’re at fault for the accident. This is important when the insurance company or court is determining how much the injured person receives in damages, or the compensation you receive to recover your costs if you were injured in an accident.

Enjuris tip:The amount of damages you can recover is reduced according to your percentage of fault for the accident. You can only recover damages if your contribution of fault is 50% or less.

Along those same lines, if there are 2 or more parties who are at fault, they’re considered to have joint and several liability for the same injury, which means they share the expense of damages.

Why is this important for a Tennessee bus accident?

A bus accident is one of the few situations where you, as a passenger, are likely not going to have any percentage of fault.

In a car accident, even if you didn’t cause the accident, you’re likely to be determined to have some percentage of fault. For example, if someone swerved in front of you, the accident is their fault but the court might find that if you’d braked a moment sooner, you could have avoided an accident.

But as a bus passenger, it’s completely out of your hands.

There are 3 primary reasons why people travel by bus: commuting to work, inter-city long-distance travel, and school busing. The Tennessee Department of Transportation says:

“Compared to driving, public transportation is less expensive, safer, and better for the environment. It reduces traffic congestion, saves energy, and benefits the communities it serves.”

Enjuris tip:Tennessee has a variety of urbanized and municipal systems, along with rural transportation routes. You can view information for the transportation systems nearest you on the Tennessee Department of Transportation website.

There are also private bus transportation services like Greyhound, Megabus and chartered buses. A charter bus is rented by a team, organization, or group of people who are traveling together between 2 or more destinations.

Nationally, there are about 480,000 school buses on the road each school day and they transport about 26 million children.

Facing factsThe National Highway Traffic Safety Administration says that fewer than 1% of all traffic fatalities nationwide involve children on school buses. Students are 70 times more likely to safely arrive at school and return home on a school bus than in a car.

School buses are safer than most other vehicles for a couple of reasons:

In The News:Following a 2016 school bus crash in which the driver was speeding and using his mobile phone while driving, Tennessee legislators modified school bus laws so that a school bus driver must now be at least 25 years old, have 5 consecutive years of driving experience, and participate in a school bus driver safety program.

On a November day in Chattanooga, 24-year-old Johnthony K. Walker was driving a school bus carrying 37 children home from their elementary school. The bus was traveling on Talley Road in the Brainerd neighborhood when Walker lost control of the bus. It crashed, rolled onto its side, and wrapped around a tree. Six children under 10 years old were killed and many more were injured as a result of the crash.

The accident investigation showed that Walker had been speeding and using his cell phone at the time of the crash. He had received his commercial driver’s license only the previous April and had been involved in another minor bus crash in September — just 2 months before the fatal accident.

A school bus distributes crash force differently from cars or trucks. The seats on a school bus provide “compartmentalization,” which protects passengers in the absence of seat belts. The bus seats are strong, closely spaced, and include energy-absorbing seat backs.

There are presently 8 states that require seat belts on school buses. Tennessee State Representative Susan Lynn introduced legislation in 2016 that would require Tennessee school buses to have seat belts. As yet, the law has not passed. Her action follows a deadly Meigs County school bus accident in October 2020, which resulted in the deaths of both the driver and a 7-year-old passenger.

Liability for a Tennessee bus accident

Liability is going to be a complex — but essential — element to your bus accident lawsuit.

If you’re in a bus accident as the driver or passenger of a car (i.e. not the bus), it would be handled like any other multi-vehicle crash. Your insurance company would attempt to sort out liability, and the person responsible for causing the crash is responsible for resulting damages.

But if you’re a bus passenger and aren’t liable, there are several parties that could be individually or jointly liable.

These are some of the possible liable parties in a bus accident:

A “common carrier” is a business that’s licensed to transport passengers for a fee. There are state and federal regulations that mandate that a common carrier has a duty to ensure the safety of passengers.

Damages for a Tennessee bus accident

In a bus accident, you can recover costs for your medical treatment and other expenses associated with the crash. This can include:

But there are things you can do to prevent injuries like a slip-and-fall while boarding or leaving a bus or crossing the street.

These 10 tips can help make your bus experience safer:

Finally, if you were injured, or if you lost a loved one in a bus accident, take comfort in knowing there’s legal help available. A Tennessee bus accident lawyer can work with the insurance companies and opposing parties to get the settlement you deserve... or to file a lawsuit if that becomes necessary. Contact a skilled and experienced attorney today to get what you need after a Tennessee bus accident.