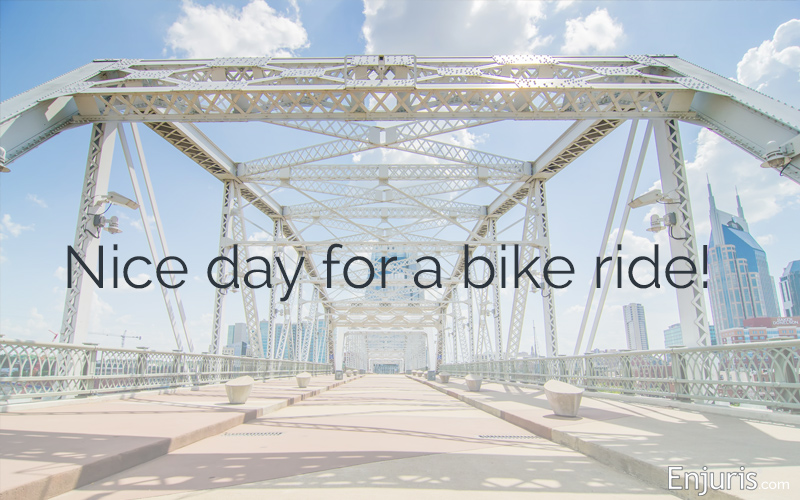 If you’ve been injured, there are ways to have your bike accident expenses covered

Bicycling has become a popular American activity. In 2016, only about 12.4% of Americans said they rode a bike regularly, but that number increased to about 14.5% (47.5 million people) in 2017, and continues to increase.

Bicycling — particularly on roads — presents a unique set of challenges and safety risks. Overall, cycling is a safe and healthy way to travel. But you do need to be aware of traffic hazards and how to prevent them, along with what to do if you’re involved in an accident.

The number of Tennessee bicycle-related traffic fatalities and injuries has remained fairly steady over the past decade.

Here’s a look at the number of bicycle-related traffic injuries and fatalities in Tennessee from 2007 to 2019:

Here are just a few of the primary bicycle laws in Tennessee:

A bicycle in Tennessee has the same legal status as a car or other motor vehicle.
Tweet this
Enjuris tip:For more detailed information, or for laws specific to electric bikes, you can visit the Tennessee Department of Transportation website.

Many bike accidents can be prevented by the rider. A rider can’t control a motor vehicle driver’s behavior, but you can avoid some of the common ways that bicyclists get injured.

You’ve probably heard plenty of public awareness campaigns about texting and driving or other forms of distracted driving. But distracted biking is an issue, too. Many cyclists look at their phones or other devices while riding, and that’s always dangerous. Your eyes and attention need to be on the road at all times, whether you’re biking or driving.

Like drivers, a cyclist should ride in a way that allows them to be in control of their bike at all times. Your speed should depend on road conditions, weather, amount of travel, speed of vehicle traffic, and other factors.

Tennessee requires that a motorist give bicyclists at least 3 feet of space when passing.

Some drivers (and bicyclists) think that because cars tend to move more slowly in parking lots or when backing in or out of a driveway, those areas aren’t dangerous. But because these scenarios often involve backing up and unexpected movement, they can present their own risks.

Liability for a Tennessee bicycle accident

A bicycle is considered a vehicle, so the same rules should apply for a bike accident as a car accident... right?

So if you’re a bicyclist and you don’t own a car, then you probably don’t have auto insurance. Your medical insurance should cover some of your treatment. But if you’re seriously injured, it won’t cover your accident-related expenses in their entirety.

It depends on who’s negligent. Negligence is an important element of personal injury law. In order to recover damages, a plaintiff (the injured person) must prove that another party was negligent—or was liable for the accident.

A defendant who’s negligent has breached their duty of care, which means that they took an action (or inaction) that they could reasonably know would cause injury to another person.

Who could be liable for a bicycle accident?

Tennessee is a comparative negligence state. Each driver is assigned a percentage of liability in an accident. A driver who is 50% or more at fault for an accident cannot recover any damages in a lawsuit.

In other words, if you’re injured in a Tennessee bicycle accident, you’ll need to show that even if you didn’t cause the accident, you also weren’t doing something that might have contributed to the accident.

For instance, if the accident was a driver’s fault but the court finds that you were somehow also negligent (looking at your phone, failed to signal, not using the required lights, failing to yield, etc.), then your damage award would be reduced according to your percentage of liability.

How to recover damages in a Tennessee bicycle accident

You typically have 2 options for recovering damages for a Tennessee bicycle accident:

As mentioned above, the negligent party might not be a driver. If it’s any other party — a municipality, pedestrian, etc. —  then you’ll need to file a lawsuit.

If you decide to pursue the defendant’s auto insurance policy, there are a few things you need to know. First, auto insurance will only cover medical treatment and property damage. If you have other costs such as long-term care, ongoing medical treatment like future surgeries or therapies, or if you’ve lost time from work because of the injury, then you’ll need to file a personal injury lawsuit.

In a personal injury lawsuit, you can claim costs that include:

Enjuris tip:The Tennessee statute of limitations for personal injury lawsuits is 1 year. If you intend to file a claim for a Tennessee bicycle accident, you have 1 year from the date of the accident in which to do so.

What to do after a bike accident

A bike accident can leave you seriously injured or traumatized. Most cyclists aren’t thinking about insurance claims or litigation immediately following an accident. If you’re able to take a few simple steps immediately after a bike accident, you will greatly increase your chances of recovering damages down the line.

If your injuries are serious, long-lasting, or expensive, it may be worth taking the time to contact a Tennessee bicycle accident lawyer to review your options for legal recovery.

Look for an attorney with the right skills, experience, and knowledge of bicycle law to help you recover to the greatest extent possible, whether that means negotiating a fair settlement, minimizing your liability, or discovering evidence necessary to prove your claim.

The Enjuris law firm directory is your resource for finding a Tennessee bicycle accident lawyer who’s best suited for your claim.