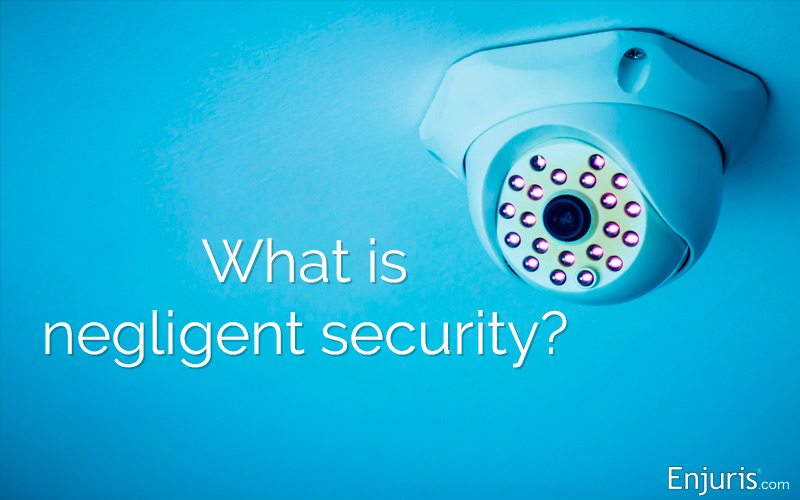 Elements that must be proved and damages that can be recovered

Marcy went shopping at her local grocery store one winter evening. When she exited her vehicle in the unlit parking lot, she noticed a man coming toward her. Feeling uncomfortable, she turned back to her car. Before she could get into her car, the man struck her from behind and stole her purse. Marcy collapsed from the blow and fractured her hip.

But what about the owner of the grocery store?

Should the owner be held liable for failing to provide adequate lighting or some other form of security in the parking lot? Does it make a difference if there was a spree of muggings shortly before Marcy was mugged?

The laws and statutes that seek to answer these questions is known as “negligent security.”

What is negligent security?

Negligent security (sometimes called “premises security” or “inadequate security”) is a legal cause of action brought against a property owner when an individual is injured on the property due to a lack of reasonable security.

How does a negligent security claim differ from a premises liability claim?

Negligent security is a branch of premises liability. In both instances, a person is claiming that they were injured on someone else's property.

In a typical premises liability claim, the injured person is seeking damages from the property owner due to some dangerous condition that existed on the property and caused their injury (such as a broken step or slippery floor).

In a negligent security action, the injured person is seeking damages from the property owner for the criminal acts or wrongdoing of an independent third party (such as a robber or mass shooter).

What does a plaintiff need to establish in a negligent security action?

Generally speaking, the law doesn’t impose a duty on people to protect others from criminal acts of unknown third persons. There are, however, exceptions when a special relationship exists.

The 2 most common special relationships that may give rise to a duty to protect others from criminal acts are:

In addition, all states have now recognized that business owners owe a duty to provide their customers with reasonable protection from foreseeable criminal activity.

What constitutes reasonable protection depends on the specific circumstances of the case. Common examples include:

In some states, there are statutes that list certain security measures that businesses can take in order to create a presumption that they provided their customers with reasonable protection.

There are 3 main tests to establish foreseeability in negligent security actions:

The types of compensation available in a negligent security action depend on the state in which the lawsuit is filed. In general, plaintiffs can recover:

No matter what state you’re in, it’s a good idea to keep track of all your expenses and document the impact of the injury on your day-to-day life. These records will help ensure you receive the damages you deserve.

Negligent security lawsuits are fairly common in the United States. Let’s take a quick look at some real-life examples:

A man was killed during a robbery while working at a car wash. During the trial, it was revealed that the surveillance cameras at the carwash hadn’t worked for over 2 years. In addition, the carwash was located in a dangerous neighborhood as there were 4 earlier crimes at the carwash that the worker wasn’t told about, and the manager of the carwash refused to walk onto the property without an armed escort. A jury awarded $5.45 million to the family of the deceased.

If you think you may have a negligent security case, use our free online directory to reach out to an experienced personal injury attorney.