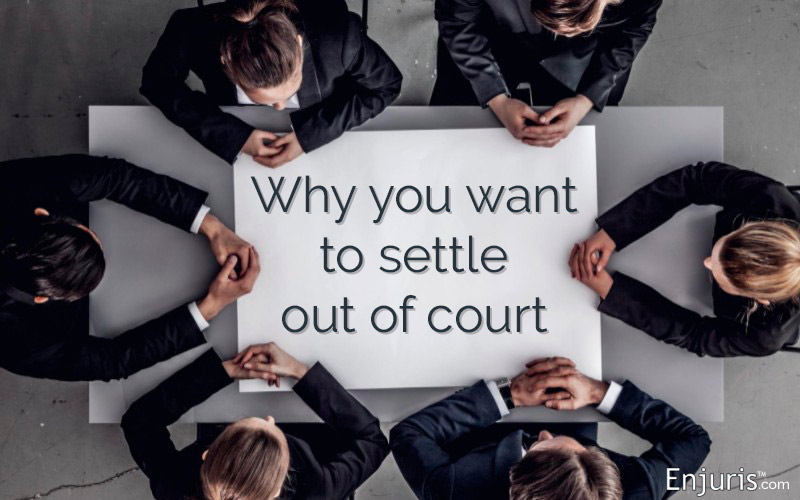 Table of Contents + show
How to settle a case out of court – and why you want to
Even small cases can damage you
You lose some control in the court system
Expense, travel and time
Legal fees
Don't settle for the sake of settling

Many legal cases – more than 90% of cases, in fact – are spent preparing for events that never actually occur.

An individual legal file is the culmination of months or years of work, tactical efforts, depositions, independent medical exams, questions, answers, records, data, and most of all, money – and at the end of it, the majority of cases are resolved on the day of trial, sometimes on the courthouse steps.

All the prep is a show of force, saying, "My attorney prepared better than yours did."
Tweet this

All that preparation is a show of force, saying, "My attorney prepared better than yours did."

But in the end, it's necessary. If you don't do that, if you come to those courthouse steps without your guns blazing, then you don't have any ammo in your holsters and you have no bargaining chips. (Yes, we are mixing metaphors here. Bear with us.)

It is in your best interests to have all your ducks in a row when meeting with the other side to discuss a settlement. Know every detail. Have every line item in your mind. Review every medical record and be able to recall those numbers at a moment's notice.

It will be in your best interest, and this is why.

Even small cases can damage you

It's been said that $1,000 is not a lot to have, but a lot of money to owe. Try doubling that, tripling that or quadrupling that. You're not even getting into small claims court territory, which is anything below $25,000. Think of how much havoc a small claims court case could do to your life and how much it could disrupt your finances. If your rent is $2,000 a month and you owe $15,000 on a small claims case, what are you going to do?

Meanwhile, think of what else can happen, even with a small case:

You lose some control in the court system

When you become part of the legal system, you are handing responsibility for your case's outcome to a judge or jury.

While that might seem like a breath of fresh air to some, that also means that any opportunities for discussion or compromise are out the window. You are actively relinquishing control. You may no longer have to think about being the primary actor in a case, but then you have to deal with long wait times – weeks, months, perhaps even years – and being at the mercy of someone else's moral compass.

The outcome of your case may depend on how tired the judge is.
Tweet this

By the way, did you know that the outcome of a case can change depending on if it's decided before or after lunch? If someone is tired or not tired? If they fought with a spouse or are having a good day?

People are human, and that will directly reflect on the outcome of your case. Your case.

Everyone likes to think they are untouchable and can work within the strictures of whatever rules are set up by the court, but more than that, people are human. Whether a courtroom is air conditioned or not is going to affect how they feel about your medical bills. You might want to think about settling out of court and staying as far away from human sentiment as possible. Removing factors means you have more control over the game – and it is a game. Remember that.

Enjuris tip: Confused by all the jargon? Learn the difference between mediation, arbitration and going to court.

Some cases are what is called "diversity jurisdiction," meaning they travel across state lines.

A defendant might have "purposefully availed" him- or herself to the jurisdiction in question, indicating that their actions thrust them into the fray and the state's long arm of the law has ensnared that individual for the purposes of a trial. (This is a little primer of what a first-year civil procedure law class sounds like.)

So. What does that mean for you, the victim?

Even if both you and the defendant decide to settle ahead of a trial, it could take a lot of time and a lot of money to reach that point. You'll need to have received enough medical evaluations and insurance depositions to make a definitive conclusion that you're injured enough to settle, and that could take years. How many trips to New Jersey will that take?

Settle your personal injury case out of court and keep your legal fees down.
Tweet this

A trial on top of that would be ridiculous. In the end, you would receive hardly anything in damages after the attorney's office takes its third of the reward plus its office's fees.

Let's take a moment to talk about those legal fees. U.S. corporations pay more than $20 billion each year to litigation attorneys. Those are the companies that actually have the money to pay those fees! And we aren't even talking about the immeasurable costs like lost time at work, taking key personnel from productive activities, and more.

What about the rest of the country that does not have the type of money available to pay those legal fees? Even the parking costs alone at a downtown city firm can add up quickly, and those certainly aren't deductible on an income tax return.

Don't settle for the sake of settling

Of course, this doesn't mean you should never go to court. Sometimes alternative dispute resolution breaks down and you cannot reach the settlement agreement that you want, like what happened in this teacher's case.

Don't get hosed simply because you think court is a place to avoid. Honestly, it's really not all that bad. If an insurance company refuses to make a fair offer or the mediator isn't coming back with a number you think is fair, you might need to play hard ball.

Try looking in the Enjuris law firm directory for an attorney if you need a firebrand lawyer by your side. They know how to play the game and will go to bat for you.