Accident Help (Home) » Injury Blog » If I File a Personal Injury Lawsuit, Is It Public? 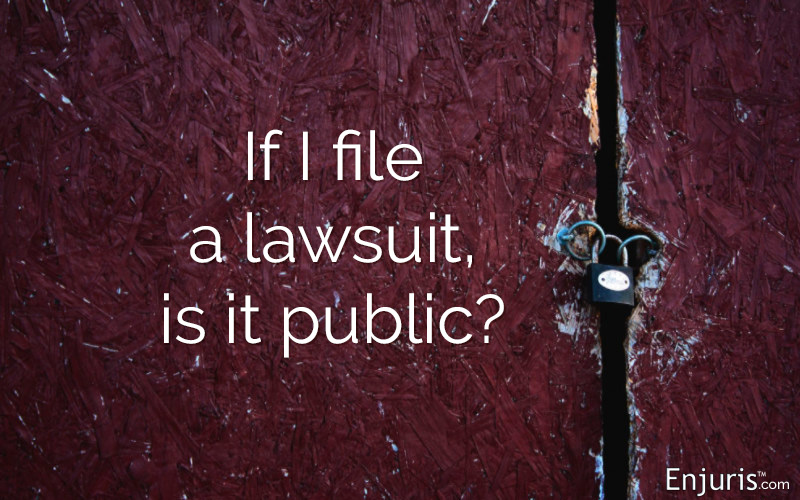 Going to trial has consequences to consider

If you have been hurt by the negligent actions of another person or entity, you may consider filing a personal injury lawsuit.

But have you ever considered that the outcome of the case could become public? Whatever state the personal injury case occurs in, a trial's outcome will nearly always be public.

There are exceptions to this rule, but the 1978 landmark case Nixon v. Warner Communications established the general concept that public trial details are matters of public record.

What might happen as a result of public records?

Many people may not care if the lawsuit and outcome is public record, but that is not always so.

To understand the far-reaching consequences of this decision, consider the following case.

A North Carolina man received a four year sentence for drug-facilitated sexual assault of a 15 year old girl. While justice was served in this criminal case, if the family decided to file a personal injury lawsuit against the convicted criminal, it could go to trial instead of being settled out of court.

According to North Carolina state law, trial records are public records and may be accessed by anyone.

Think about this – put yourself in the parents' shoes:

If the lawsuit went to trial, the girl could have to deal with the humiliation of a public trial.

Imagine being the parents of the child. She already has had to endure the torture of being assaulted and the criminal trial. Imagine if she had to have the entire sordid case revealed to the public in a new trial. Is that something you would want for your own child?

Perhaps you would still go ahead with a lawsuit and go to trial if necessary, but the public nature of court trial records must be considered in some personal injury complaints.

See Mediation, Arbitration, or Going to Court: Which is Best?

Going to trial can be embarrassing, and may not pay

Most personal injury lawsuits across the US never actually go to trial. Estimates vary from 80-92% of cases are settled out of court. There are many reasons for this, but studies indicate that settling is usually better financially than going to trial.

For example, a study published in 2008 by DecisionSet, a consulting firm, found that most plaintiffs who declined to settle ended up getting less money at the trial. The findings were based upon a study of 2054 cases that ended up going to trial from 2002-2005. It was later published in the Journal of Empirical Legal Studies.

On average, it was found that plaintiffs lost $43,000 by not settling. Defendants, while they were wrong far less often, paid dearly if they were wrong – the cost of going to trial for them was an average loss of $1.1 million.

Imagine if you had suffered a serious personal injury in an embarrassing case – such as the above statutory rape case – went to trial, did not recover damages, and had the trial go into public record. That would be devastating for the family to endure.

Such consequences need to be considered carefully by anyone pondering whether to settle or go to trial.

Should you settle or go to court?

Settling out of court – pluses and minuses

There are many things to consider about settling. On the plus side:

Going to trial – pluses and minuses

There are some cases that are difficult to settle out of court. Some personal injury cases are more problematic and the chances of going to trial is higher. These cases usually involve two factors:

In the end, both plaintiffs and defendants must weigh the pluses and minuses of going to trial. It may be a wise idea to review your case with a personal injury attorney or defense attorney to determine the best course of action.