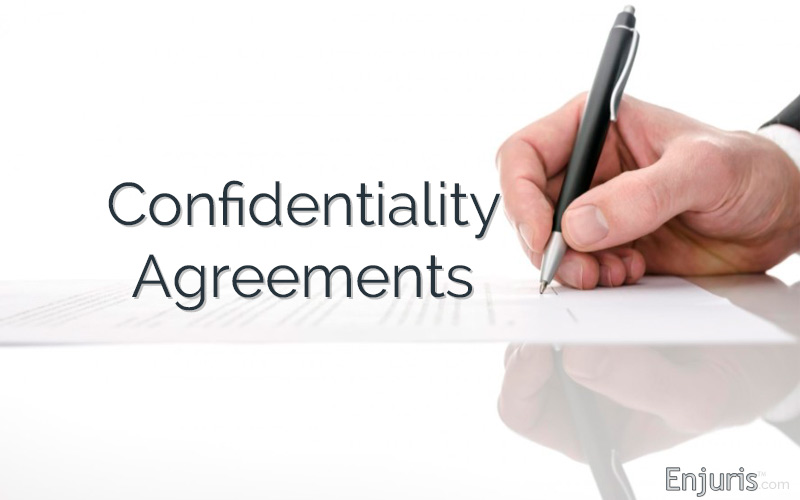 The fine print of settlement contracts during the negotiation process

Table of Contents + show
The fine print of settlement contracts during the negotiation process
What to consider prior to signing an NDA
The bottom line
During the settlement process for personal injury cases, a defendant may request that you sign a confidentiality agreement. These documents can be sweeping catchalls that demand you never discuss any pertinent information about the case. Others are refined and fitted to the matter at hand. Should you sign one at all?

Signing a nondisclosure agreement (also known as a confidentiality agreement) while embroiled in a civil personal injury lawsuit might seem simple. This contract is intended for two or more parties to agree that information material to the proceedings will remain private. It is also a method to help inventors retain their patents. Because these agreements are signed on a fairly regular basis, many parties to a suit sign them without much deliberation.

This can turn out to be a serious mistake.

What to consider prior to signing an NDA

This article should not suggest that confidentiality agreements are inherently bad. They often protect reputations by preventing sensitive and personal information from being revealed. Trade secrets can also be kept from public release, preventing any damage to that related business. But here are instances in which signing one can lead to some problems.

How long must you keep silent about the particulars? Forever? Six weeks? Five years?

Before signing, make sure to ask the following:

One should always deliberate before signing a confidentiality agreement in the context of a personal injury lawsuit.

For example, a plaintiff might have been seriously injured because of an extreme act of negligence. The defendant wished to avoid a public trial, and thus a settlement was offered. During settlement negotiations, the plaintiff is told that he cannot ever publicly discuss the case. This keeps the plaintiff from selling the rights to his story or writing a book about what happened.

Conversely, it maintains the defendant’s reputation and allows them to keep doing whatever it is they were doing.

Perhaps the plaintiff was not motivated by financial circumstances. If the defendant were participating in a harmful activity, the plaintiff may wish to reveal the particulars to the public, to serve as a warning to others. Once a confidentiality agreement has been signed, the plaintiff’s desire to be a good citizen goes out the window. In theory, only one party truly benefits from this type of agreement.

There are many defendants who continue to engage in negligent behavior because they are not held accountable. A plaintiff who can pull the alarm on a defendant like that manages to retain credibility. If the defendant is found liable with the aid of the plaintiff’s words, other accidents can be prevented.

A defendant may want to keep certain particulars of a case from being revealed, which in many cases is understandable. For instance, if reports of a settlement or verdict are publicly revealed, this might encourage any number of frivolous claims being filed against a company in hopes of settling for a quick buck. It can be a wise strategy for defendants to maintain at least some confidentiality.

Problems emerge when a defendant tries to make sweeping demands in relation to confidentiality. Are you allowed never to talk about what happened? Will you get in trouble? There are many considerations to examine prior to signing an agreement like this. Make sure you weigh all sides and talk to an attorney if you need guidance.