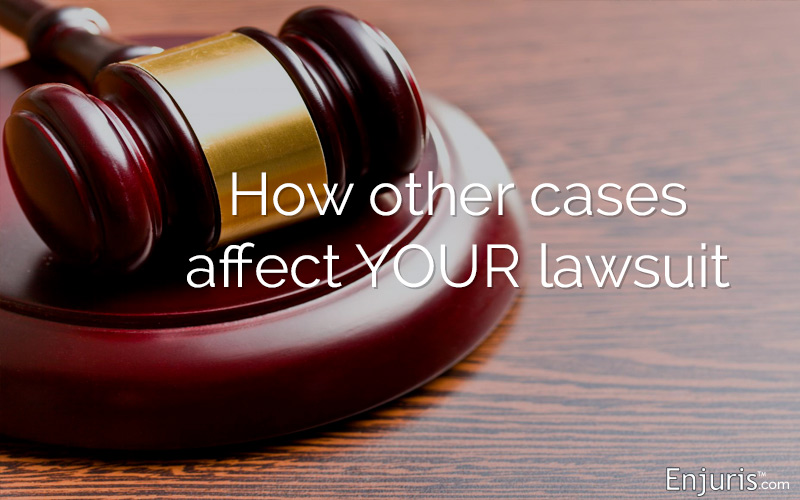 Your lawsuit might depend on similar cases that came before. Here’s why...

Table of Contents + show
Your lawsuit might depend on similar cases that came before. Here’s why...
Common law vs. statutory law
Can a judge make new law because they don’t like the ones from previous cases?
Common law examples
Common law application in your lawsuit
Some laws are made by the legislature, but others are made in the courtroom. “Common law” is when a decision in a case sets the precedent for similar cases that follow. Here’s the difference between common law and civil law, and why it matters.

If you’re filing a lawsuit, your lawyer might throw around words that are unfamiliar — and you might feel awkward asking a lot of questions.

In this article, we’ll help break down one legal concept that’s important to understand for someone pursuing legal action.

You might already know the difference between criminal law and civil law. A criminal case arises when someone is arrested for committing a crime. There are all types of crimes: white collar (financial or business-related), violence against people, damage to property, traffic-related, and more. Criminal offenses range from misdemeanors (less serious crimes) to felonies and capital felonies (most serious). When someone is convicted in criminal court, the penalty could be a fine, community service, probation, or jail time. There’s no “plaintiff” in a criminal case; the person who was arrested is the defendant and the opposing side is the government (local, state, or federal) as the prosecutor.

Enjuris tip: Pharmaceutical liability cases are a perfect example of cases that often have multiple defendants. In a pharmaceutical liability case, defendants could include the drug manufacturer, prescribing physician, the hospital or clinic where you were given the drug, the pharmacy, and anyone else in the chain of custody of the medication from manufacturer to patient.

If you’ve filed a civil lawsuit — whether a car accident, medical malpractice, toxic tort, or something else — the first thing your lawyer might do is look at common law, also known as case law.

Each state and federal government has its own set of laws and regulations, which are statutory or regulatory laws. Those laws are set by the government’s legislative branch (state legislatures or the US Congress). The courts (judicial branch) are required to follow these laws, but they don’t create them.

The courts do create laws based on how they rule on particular cases, and those become common law. When a court issues a decision, the basis of the decision — the why — establishes a precedent for future cases with similar facts.

In other words, that case becomes law for cases that follow.

Can a judge make new law because they don’t like the ones from previous cases?

Once precedent is established, it’s not that easy for it to be overturned. In general, when there’s a previous decision with similar facts, the court is bound to follow that reasoning and deliver the same verdict as the previous court. This principle is called stare decisis (in Latin, “decided”).

However, the court might determine that the facts of the current case are sufficiently different from any other case that has come before it, which allows the court to reverse a decision or make a decision based on a different theory of law. In that situation, it’s called a matter of first impression.

When that happens, the judge’s decision must set forth how this case is different and then it would become precedent for future cases. Usually, if a court attempts to set precedent, the case will continue through the appeals process, which means it will be retried in a higher court to determine if the decision should stick or be overturned.

Enjuris tip:“Precedent” usually only controls cases in the same court system. So, if precedent is set in a New York court, it would not apply in Montana. It might be considered “persuasive authority,” which can influence the Montana court to follow the decision, but it wouldn’t be binding.

Palsgraf v. Long Island RR Co., New York, 1928: Even though this is a case from 1928, it set a precedent that still holds today and establishes a rule of law that’s important for many personal injury cases. The Palsgraf case answers the question of liability to an unforeseen plaintiff.

Common law application in your lawsuit

Beyond that, precedent provides your lawyer with arguments in your favor. They’ll look to cases with facts similar to yours and use the court’s decision to make your case. That’s one of many reasons why you should consider hiring a qualified, experienced lawyer.

Find an attorney who’s knowledgeable and comfortable with the area of law specific to your case. If you’ve used a divorce lawyer, that person might not be the right fit for your personal injury case. It’s important to know what to look for as you hire your lawyer for any legal action. Litigation can be costly and time-consuming. You might think you have a great case, but understanding the elements of your lawsuit will help you (and your lawyer) know if it’s worth your time and money.