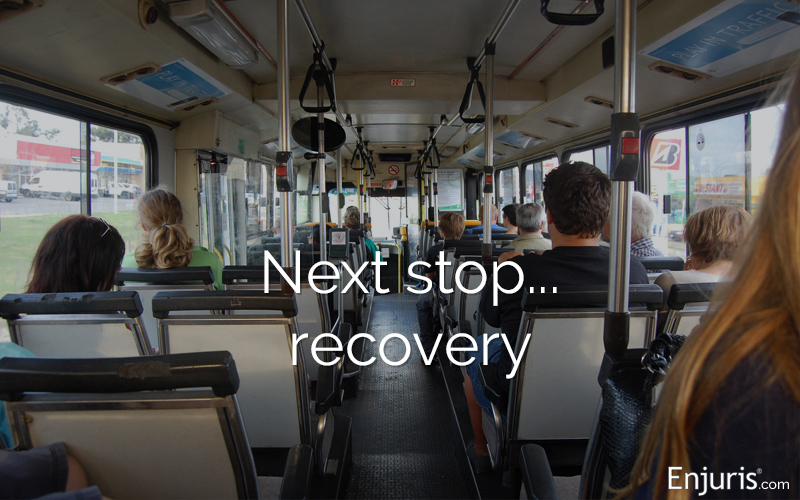 Who’s liable when a bus crashes and when should you contact a bus accident lawyer near you?

Traveling by bus is affordable, accessible, and eco-friendly. The state of Pennsylvania invests more than $1.5 billion annually in public transportation, which includes rural and urban fixed-route bus service throughout the state, as well as 13 intercity bus routes provided by 4 bus companies.

Bus drivers and passengers in Pennsylvania can pursue compensation after a bus accident by filing an insurance claim or a personal injury lawsuit. Legally speaking, a bus accident isn’t quite the same as a car accident though.

Here’s what you need to know.

Types and causes of bus accidents

Pennsylvania defines “buses” as any vehicle designed to transport more than 15 people. Examples include:

The laws and regulations, as well as the method of financial recovery, differ depending on which type of bus is involved in the accident.

Some bus accidents involve crashes with stationary objects or other vehicles. Other bus accidents simply involve passengers getting hurt while boarding or exiting the bus.

Although crashes can happen in a variety of ways, some common causes of bus accidents in Pennsylvania include:

Interestingly, drunk driving is NOT a common cause of bus accidents in Pennsylvania. While 4.8% of passenger car crashes were caused by drunk driving in 2018, only 0.1% of bus crashes involved alcohol.

Real Life Example: In 2020, a tour bus operated by Z&D Tours was traveling through a snowstorm in the rural mountains along the Pennsylvania Turnpike when it lost control and collided with a UPS truck.

The driver of the bus, 2 bus passengers, and both occupants of the UPS truck were killed. Nearly all of the 61 passengers on the tour bus were injured.

Though the investigation is still ongoing, cell phone footage from the crash indicates that the driver of the bus may have been driving too fast for the conditions.

If the bus driver was driving too fast, the injured passengers and the families of the deceased will be able to recover damages by filing a negligence lawsuit. To support their claim, lawyers will likely review “black box data” from the bus, review cell phone footage, depose the surviving passengers, and hire an accident reconstructionist to analyze the scene.

Determining who’s liable for a bus accident requires that you determine who caused the accident. In most cases, there are 3 possibilities:

If you were a passenger on a bus and the driver caused an accident, you’ll most likely file a negligence lawsuit to recover damages. To this end, there are a couple of important points to keep in mind:

Here’s a hypothetical to help you understand who may be liable in a bus accident:

Tom is commuting to work on a city bus in Pittsburgh, Pennsylvania. He is sitting in the front seat of the bus and can see that the bus driver is texting while driving. At the same time, another vehicle, driven by Lisa, runs a stop sign. The bus driver doesn’t see Lisa run the stop sign and the 2 vehicles collide.

Tom suffers whiplash and wants to file a lawsuit so that he can be compensated for his medical expenses and lost wages.

Who should Tom sue?

Ultimately, it’s not up to Tom to decide who’s more at fault or what percentage each party is at fault. Rather, Tom should sue both parties and let them point the finger at each other in court.

What’s more, in addition to suing the bus driver, Tom should sue the owner of the bus (in this case, the city of Pittsburgh) under the doctrine of respondeat superior.

If you’re a bus driver involved in a bus accident, you’ll most likely file a workers’ compensation claim instead of a personal injury lawsuit. Workers’ compensation is a form of insurance that pays medical expenses and lost wages to employees who are injured on the job.

Workers’ compensation is no-fault insurance, which means that you can receive compensation regardless of who’s at fault for the accident.

Buses are large and generally travel at low speeds. As a result, serious injuries and fatalities are relatively rare. On the other hand, buses are generally not equipped with seatbelts and rollovers are more common than with smaller vehicles.

Enjuris tip:To ensure you recover the damages you deserve, it’s important that you keep track of your medical expenses. In addition, you should keep track of how your injuries impact your day-to-day activities by maintaining a pain journal.

When to consult a Pennsylvania bus accident attorney

A bus accident isn’t as straightforward as a regular car accident. There may be several liable parties, including large companies (which have their own team of well-paid attorneys) and government agencies (which require a plaintiff to take several additional steps before filing a lawsuit). What’s more, there are usually dozens of witnesses (some of whom may be filing their own lawsuit).

To locate an experienced personal injury attorney in your area, check out our free online directory to view attorney profiles and schedule an initial consultation.