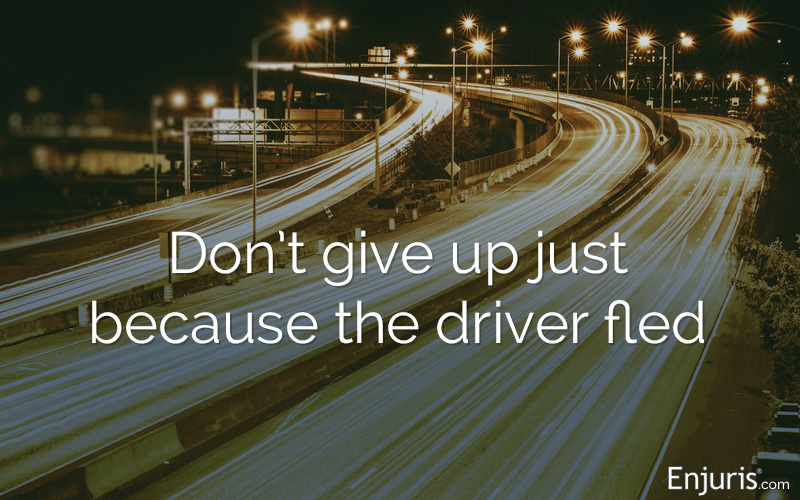 Learn the steps you should take following a hit-and-run crash, and your legal options for recovery

The term “hit and run” refers to a crash or collision in which one of the drivers involved flees the scene without stopping to provide their information and assist the other people involved in the wreck.

Hit-and-runs can be particularly frustrating because the innocent party may be left without someone to sue.

Fortunately, hit-and-run survivors in Oregon have some options to recover damages, even if the at-fault driver is never found.

How common are hit-and-runs in Oregon?

According to the AAA Foundation for Traffic Safety, there are roughly 682,000 hit-and-run collisions every year in the United States.

A hit-and-run accident occurs every minute on U.S. roads. Tweet this

The majority of people killed in hit-and-run crashes are pedestrians or cyclists.

Oregon does not keep track of the specific number of hit-and-runs that occur in the state. However, officials estimate that hit-and-runs account for roughly 5% of all fatal accidents across the country. Oregon averages about 368 fatal crashes per year. Based on these numbers, we can estimate that there are roughly 18 fatal hit-and-run accidents in Oregon every year.

What steps do I need to take to avoid a hit-and-run charge in Oregon?

Most people understand that you’re supposed to stop at the scene of an accident, but there are other steps you need to take as well to avoid being charged with a hit and run in Oregon.

Pursuant to Oregon Revised Statutes 811.700 and 811.705, you must take 3 steps if you’re involved in a motor vehicle accident that you have reason to believe caused an injury, death, or property damage:

But what happens if you hit an unoccupied vehicle?

If you collide with an unoccupied vehicle, you must:

Do I need to take any steps if I hit an animal?

Drivers in Oregon have a 1 in 144 chance of hitting a deer or some other animal when driving on the state’s highways and roads, according to a study published by State Farm.

Under Oregon law, there are certain steps you must take after hitting an animal to avoid a hit-and-run charge:

Failing to take the above steps may result in a Class B traffic violation, punishable by a fine between $135 and $1,000.

What are the penalties for a hit and run?

The penalties for a hit and run depend on the nature of the damage caused. At the very least, a hit-and-run driver will have to pay a fine.

Real Life Example:In 2013, Cinthya Garcia-Cisneros felt a bump while driving over a large leaf pile in Forest Grove, Oregon. Cinthya continued to her home a couple of blocks away believing that she'd run over a rock.

Tragically, Cinthya had actually run over 2 children playing in the leaf pile. Both children, ages 6 and 11, died as a result of the impact. Cinthya was arrested the next day and ultimately convicted of a hit-and-run.

The Oregon Court of Appeals later reversed the conviction on the basis that there was insufficient evidence to establish beyond a reasonable doubt that Cinthya had “reason to believe” she’d struck 2 children.

How do I recover damages after a hit-and-run?

If you’re unable to recover damages from the at-fault driver, your own car insurance company may be able to provide you with some relief.

In Oregon, all drivers are required to carry the following types of insurance that may provide coverage in the event of a hit-and-run:

What steps should I take if I’m the victim of a hit and run?

If you’re involved in a hit-and-run, your first reaction may be to chase after the fleeing driver. This is always a bad idea. Chasing a fleeing driver puts you and everyone else on the road in danger.

Finally, if you’ve been involved in a hit-and-run, consider reaching out to an Oregon personal injury attorney. An experienced attorney can help you understand your recovery options if the other driver can’t be located, negotiate with insurance companies and help you take legal action if the other driver is eventually found.