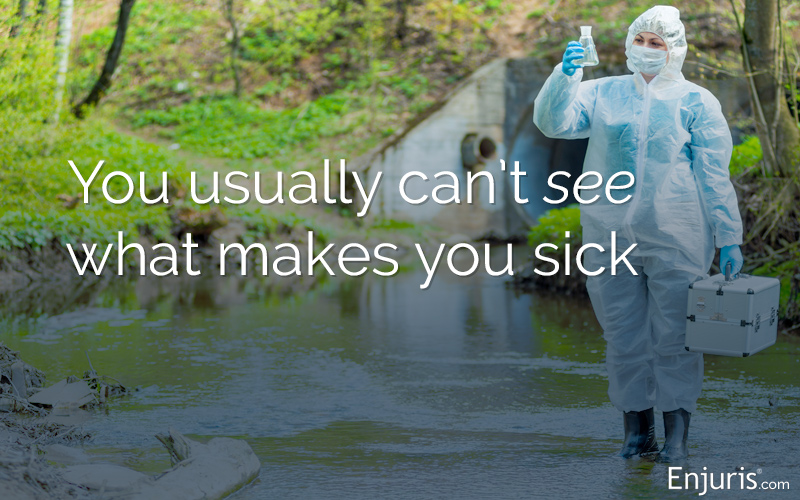 A toxin is a substance that’s present in your air, water, soil, or elsewhere in your environment and that has a negative impact on your health.

Table of Contents + show
A toxin is a substance that’s present in your air, water, soil, or elsewhere in your environment and that has a negative impact on your health.
5 common types of toxic tort claims
Toxic torts and negligence in North Carolina
What to do if you suspect that you’ve been injured by a toxic substance
People and companies have a responsibility to handle and dispose of toxic substances properly. There are some toxins, like asbestos, that we know a lot about how they affect our bodies. Others that lead to illnesses are harder to diagnose. Either way, if you or a loved one become ill because of a toxic substance in your home or work environment, you might be entitled to compensation in North Carolina.

A cough that doesn’t go away. An itchy rash that suddenly appears and you don’t know why. A neurological diagnosis that your doctor can’t explain. Any of these symptoms (and these are just examples) could be the result of exposure to a toxic substance.

A toxic tort is a personal injury claim for illness caused by exposure to a harmful substance.

Toxic tort claims originate from exposure at work, at home, through consumer products, and from pharmaceutical drugs and devices.

Here are some examples of substances that lead to common toxic tort claims:

One of the major issues in toxic tort claims is that in many situations, symptoms don’t appear for years or decades after the exposure. Also, many of these chemicals are undetectable... you can’t smell, see or taste them. You might be diagnosed with a medical condition and be completely unaware that it could be linked to an exposure you experienced several years prior.

Examples of actions that might lead to a toxic tort lawsuit:

Real life example: Roundup lawsuit: A California jury awarded $2 billion in damages to a California couple who developed cancer as a result of using the popular weed-killer Roundup.

In order to successfully make a toxic tort claim, you must be able to prove 3 things:

Experts rely on statistics to determine the safety (or harm) of various chemicals. Here are 2 such factors:

Although these statistics can help to evaluate diseases by people’s ages, genders, or racial and ethnic groups, they can also determine how environmental exposures can present a risk for certain groups or locations of people.

Real Life Example: For decades, baby bottles and other consumer items were made from plastic that contained Bisphenol-A (BPA). In the early 2000s, researchers began to share with the public that BPA could have effects like early onset of puberty for girls, behavioral and neural changes, and prostate irregularities.

BPA can be introduced into the body in your food or beverages because it’s possible for the chemical to leach from the plastic into the food. This was particularly concerning for baby bottles.

In 2011, a settlement was made in a class-action lawsuit against Philips, which manufactures Avent brand baby bottles and sippy cups. Many retailers, like Walmart and Toys R Us, no longer sell products that contain BPA.

In 2012, the FDA banned BPA in containers and bottles designed for infants and young children. You probably see “BPA-free” on many plastic water bottles, dishes, and other food storage containers around your home.

The But For test

You must show that exposure is the “immediate cause” of your injury and that you wouldn’t be experiencing harm but for toxic exposure.

This is not an easy standard to meet for pollution exposure and toxic torts. For one thing, it’s hard to prove that a health condition like cancer was caused by a toxin. You probably need to show that you have no family history of the condition and that there’s no other environmental exposure besides the one that is the subject of the lawsuit.

The But For test links the cause of an injury to the damages: “But for the defendant’s negligence, would the plaintiff’s injury have occurred?” If the answer is “no,” then you might be able to pursue a toxic tort claim.

Statute of limitations for a toxic tort lawsuit

Every legal claim has a statute of limitations, which is the deadline by which your lawsuit must be filed. In North Carolina, most personal injury lawsuits have a 3-year statute of limitations. Normally, the 3-year period begins to run on the date you were injured. For an accident, this is easy because you know when the accident happened.

The statute of limitations begins to run on the date of discovery, or the date when you discovered or should reasonably have discovered that your injury was related to exposure to a toxin.

For example, if you were exposed to dangerous chemicals from smokestacks owned by a manufacturer in your neighborhood, you might not notice symptoms of illness right away. If you were diagnosed with lung disease 2 years later, and the disease is believed to be caused by the emissions from the smokestacks, your statute of limitations would have begun on the day you began to notice the symptoms that led to your cancer diagnosis.

Cape Fear River residents claimed they were suffering extensive health problems, including colon and stomach cancers and other issues (including property damage). Residents in the affected counties had among the highest concentrations of liver disease in the country, and averages of liver, pancreatic, testicular and kidney cancers are higher in those counties than state averages.

The chemicals in question, GenX and Nafion, are almost impossible to eradicate from the water supply once it has been contaminated. These chemicals bond with pipes, animals, plants, sediments, and microbes and cannot be filtered. In order to truly eliminate the contamination and risk, the municipalities would need extensive water filtration systems, along with the removal and replacement of plumbing and appliances inside each home, which could cost thousands of dollars per household.

A judge ruled in April 2019 that the plaintiffs’ lawsuit could continue for gross negligence, negligence, private nuisance, and trespass, in addition to future medical expenses.

These are very complicated and complex cases. If you have a diagnosis that you suspect is connected to exposure to a toxin, you should call a lawyer. Your doctor might be able to diagnose your condition, but might not be able to connect it to the substance that caused it.

Your lawyer can review your medical records in conjunction with other evidence of contamination or exposure and will work with experts to link your medical diagnosis to a specific substance, its cause or origin, and who or what the defendant should be.

The other thing to be wary of is preserving evidence. That’s why a lawyer should be your first call — not a previous employer, municipal official, landlord, or company chief who you suspect is responsible for contamination or exposure. If the exposure happened many years ago (or even if it was more recent), a person who’s responsible might easily dispose of or destroy documents that might be important evidence in a lawsuit. It’s better to have your lawyer conduct discovery than for you to try to gather evidence on your own.

You might remember Erin Brockovich, the movie about a woman (played by Julia Roberts) who built a huge case against an electric company that had contaminated water and caused a cancer cluster in California in the 1990s. The reason her story was so widely known (and why it became a movie) is because it was so unusual for a person to be able to “crack” a case like that on her own.

If you need a North Carolina toxic tort lawyer, use the Enjuris law firm directory to find the right person to handle your case.