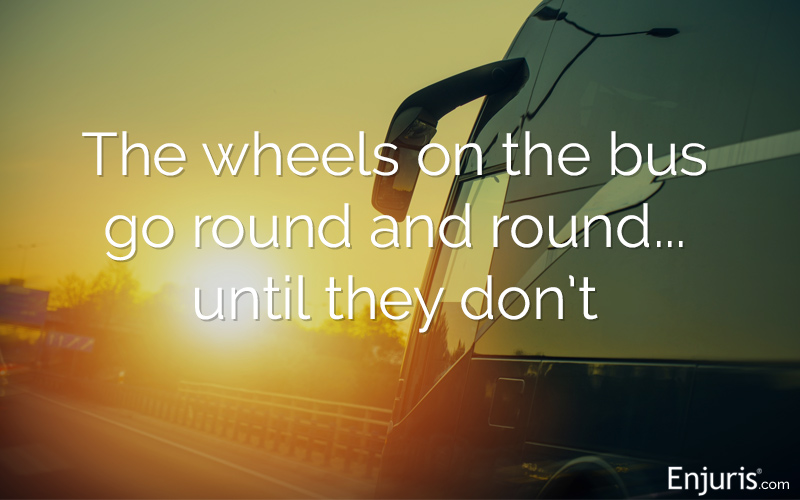 Almost everyone has traveled by bus at one time or another, whether it’s to school, work, or on a trip. Buses, in general, are a very safe form of transportation.

There are more than 130 transit systems in New York State.1 That includes railroad, the New York City subway system, and buses that operate across the state.

The two major commercial bus lines that serve New York State are Greyhound and MegaBus.2 Trailways also operates privately-owned motorcoach companies that include Adirondack Trailways, Pine Hill Trailways, and New York Trailways. There is also a variety of private charter bus companies and local bus services in every metro area throughout the state.

New York State has a Public Transportation Safety Board (PTSB) that was created in 1984 and is the first of its kind in the nation. This authority oversees all public transportation systems in the state in order to reduce the number, rate, and severity of accidents.

Buses usually fall into certain categories. Knowing how a bus is classified is important to understanding how to file a lawsuit in the event of a bus accidents:

Facing factsThese figures reflect the number of bus accidents in New York state from 2015 to 2019.

Real Life Example: Maybrook, NY: A school bus hit a tree while transporting a group of students to a sporting event. It was determined that the bus driver had a medical episode while driving, which caused the crash. None of the students were injured, but the driver died the following day as a result of the medical event.

Why do bus accidents happen?

Bus accidents are largely caused by the same factors that cause collisions between passenger cars and trucks, namely:

A tip-over or rollover is more likely for a bus than a passenger car because of the height and distribution of weight within the vehicle. Adding to this risk is the fact that most bus passengers don’t wear seatbelts and buses don’t tend to be equipped with airbags. That means that even though bus accidents aren’t as common as car accidents, injuries are often more serious when a bus crashes.

Real Life Example: Flushing, Queens: A 2017 bus crash killed 3 people in New York City. It was determined that the crash might have been caused by a loose thermal bottle that became lodged under the brake and accelerator pedals. The charter bus went through a light at an intersection, hit a city bus, and then hit a building. The bus driver, a passenger on the other bus, and a pedestrian were killed. Sixteen people were injured.

Any traffic accident can result in an injury that could be very minor or very severe.

Real Life Example: New Rochelle, NY: A highly publicized bus crash in 2011 claimed the lives of 15 people and injured dozens more. A tour bus heading toward Manhattan was travelling at high speed on I-95 in the Bronx. The group was traveling back to Chinatown from Mohegan Sun Casino in Connecticut when the bus was sliced open by a sign stanchion. The driver told authorities that the bus was hit by a passing tractor-trailer, which caused the bus to lose control. It toppled onto its right side and skidded for 100 yards along a guardrail before hitting the support pole of a highway sign, which sliced the bus in half.

The premise of personal injury law is to make a plaintiff whole again. While you can’t always be restored to the physical and emotional condition you were in before an accident, the law provides for a plaintiff to be restored financially to the position they’d have been in if the accident hadn’t happened.

In other words, the legal system is designed to compensate an injured person for the financial costs associated with the accident. This includes:

But at the crux of any personal injury lawsuit is a determination of who’s at fault (that is, who’s liable) for the accident.

Enjuris tip: If you’re pursuing a bus accident injury claim, you might hear the words “liability” and “negligence” used in similar ways, but they’re not the same.

One major factor to a successful New York bus accident claim is determining who’s liable for your injury. If you’re in a “regular” car accident with 2 vehicles involved (yours and the other driver), there’s usually 1 driver who’s either fully or partially liable. In some situations, liability is split between the 2 drivers (in other words, although 1 person might have caused the accident, there’s a possibility that the other driver might have prevented it if they’d acted differently or more quickly).

But in a bus accident, liability might not be so straightforward.

These are just a few examples. There are a range of other variables that might affect bus accident liability.

Real Life Example: Buffalo, NY: In September 2019, a Buffalo city bus was hit by a car that caused it to crash into a parked car in a pharmacy parking lot. The car was speeding and ran a red light when it hit the bus, which veered off the road from the impact. Nine people were injured and 2 were treated for serious injuries.

State and federal regulations include common carrier laws. A common carrier is any individual or business licensed to transport passengers for a fee.

If a common carrier bus company doesn’t do what’s required in order to ensure a safe ride for passengers, the bus company is negligent.

A charter bus or other private transportation motorcoach that’s in an accident is going to be handled differently from a public bus — like an MTA bus in New York City, CDTA in the Capital Region, NFTA-Metro in Buffalo, and others.

In many situations, an employer is liable for the negligence of an employee on the job. This applies to bus accidents, too. Even if the driver made a mistake, the bus company could be the liable party.

If the bus is owned by a state or local government, sovereign immunity might apply. The doctrine of sovereign immunity prohibits citizens from suing the government in some cases. That doesn’t mean you can’t get the compensation you deserve, though. Some courts interpret sovereign immunity as inapplicable to school districts, cities, municipalities, and counties — which are likely the operators of the bus system. However, you’d file a claim differently against a government than you do against a private person or company.

Statute of limitations for bus accidents in NY

In any personal injury, there’s a statute of limitations — a deadline by which you must file a lawsuit.

In most New York cases (including bus crash injuries), the statute of limitations is 3 years from the date of the injury.

There are specific requirements for what the notice must include, and there can be variations based on what agency you’re suing. This is best left to your personal injury lawyer so that all the requirements are met.

What can you do to prevent a bus accident or injury?

While avoiding a crash may be out of your hands as a passenger, bus accidents aren’t limited to just collisions. Often, injuries happen when a rider experiences a slip-and-fall getting on or off the bus, or suffers another injury related to boarding or exiting the bus.

Here are 10 tips to keep yourself safe before, during, and after your bus ride:

A federal rule established that after November 2016, all new motor coaches and certain classes of large buses must be equipped with seat belts. The rule doesn’t require seat belts to be retrofitted in buses manufactured before the rule went into effect.

You’re not required by law to wear a seat belt when one is available on a bus, but it’s a good idea to do so anyway.

When to call a New York bus accident lawyer

If you’ve been in a New York bus accident, you should call an injury lawyer right away. If you have car insurance, your no-fault insurance might cover your medical treatment for some injuries. However, if your injuries are severe, you don’t have automotive insurance, or the insurance doesn’t cover the full extent of your costs, you’ll want to seek advice from an attorney.

Especially if the bus accident occurred while on public transportation (a school or city bus), your lawyer will understand the nuances of how to file a claim against the appropriate government entity. And if it’s a private charter, those companies have deep pockets and experienced legal teams, so you don’t want to go up against them on your own.

The Enjuris personal injury law firm directory is a free resource you can use to find a New York bus accident lawyer near you who can help you receive the compensation you deserve.