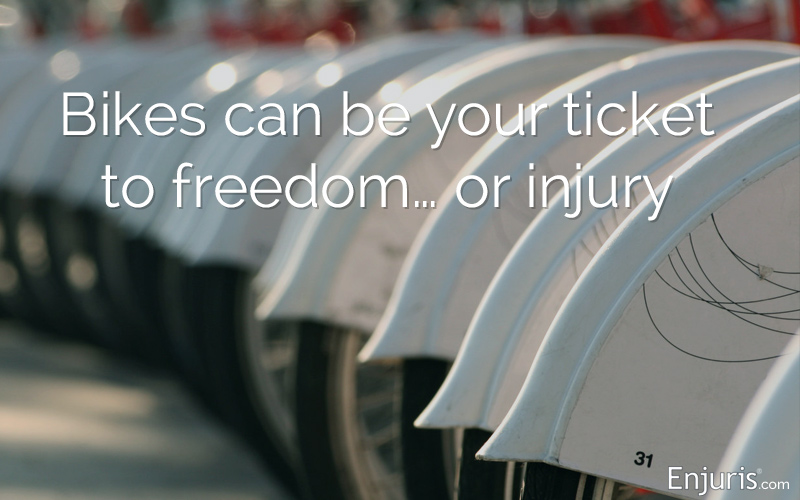 How to handle bike crash injuries in the Garden State

Table of Contents + show
How to handle bike crash injuries in the Garden State
Common bicycle accident injuries
Road rules: New Jersey laws for bicyclists
New Jersey laws for bicycle helmets and equipment
Common causes of bike accidents
Who’s liable in a New Jersey bicycle accident?
What to do after a NJ bicycle accident
Do you need a bike injury lawyer?
Bicyclists are entitled to certain protections under New Jersey traffic laws, and the tort law system can help you recover damages if you’re injured in an accident with a motor vehicle. But you have to be following the laws, too. Here’s what you need to know about bicycle-related traffic laws and how to handle an injury accident.

On March 9, 2020, both a driver and a cyclist died in a crash on Route 9 in Berkeley, New Jersey. The driver was traveling southbound on Route 9 when his vehicle crossed the center lane and collided with a bicyclist on the shoulder of the northbound lane just south of Sylvan Lakes Boulevard. 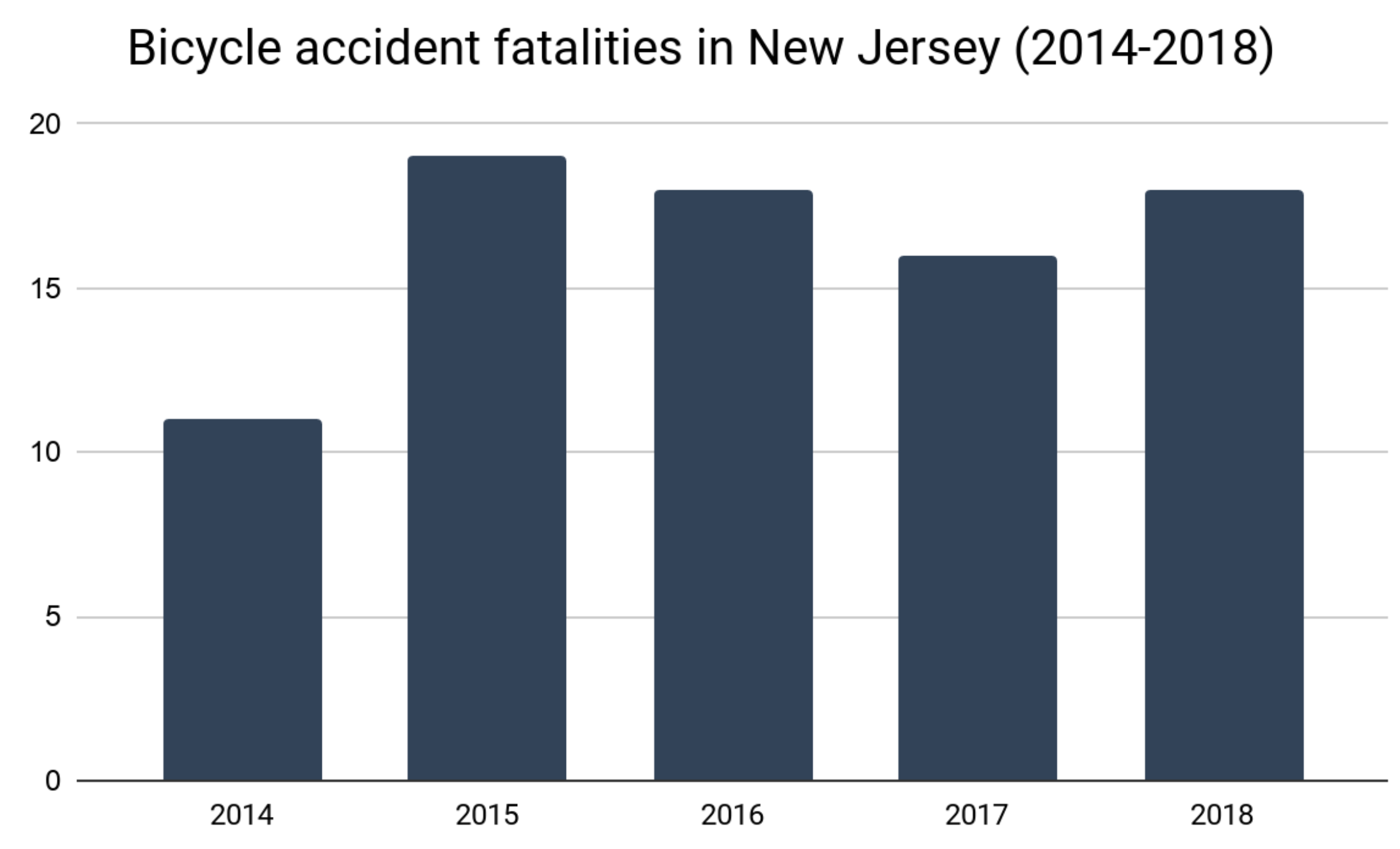 Those numbers might seem lower than you’d expect, but the numbers of injuries are far higher than the number of fatalities.

Here’s the number of bicycle injuries in the U.S. in an average year, broken down by the type of medical treatment needed: 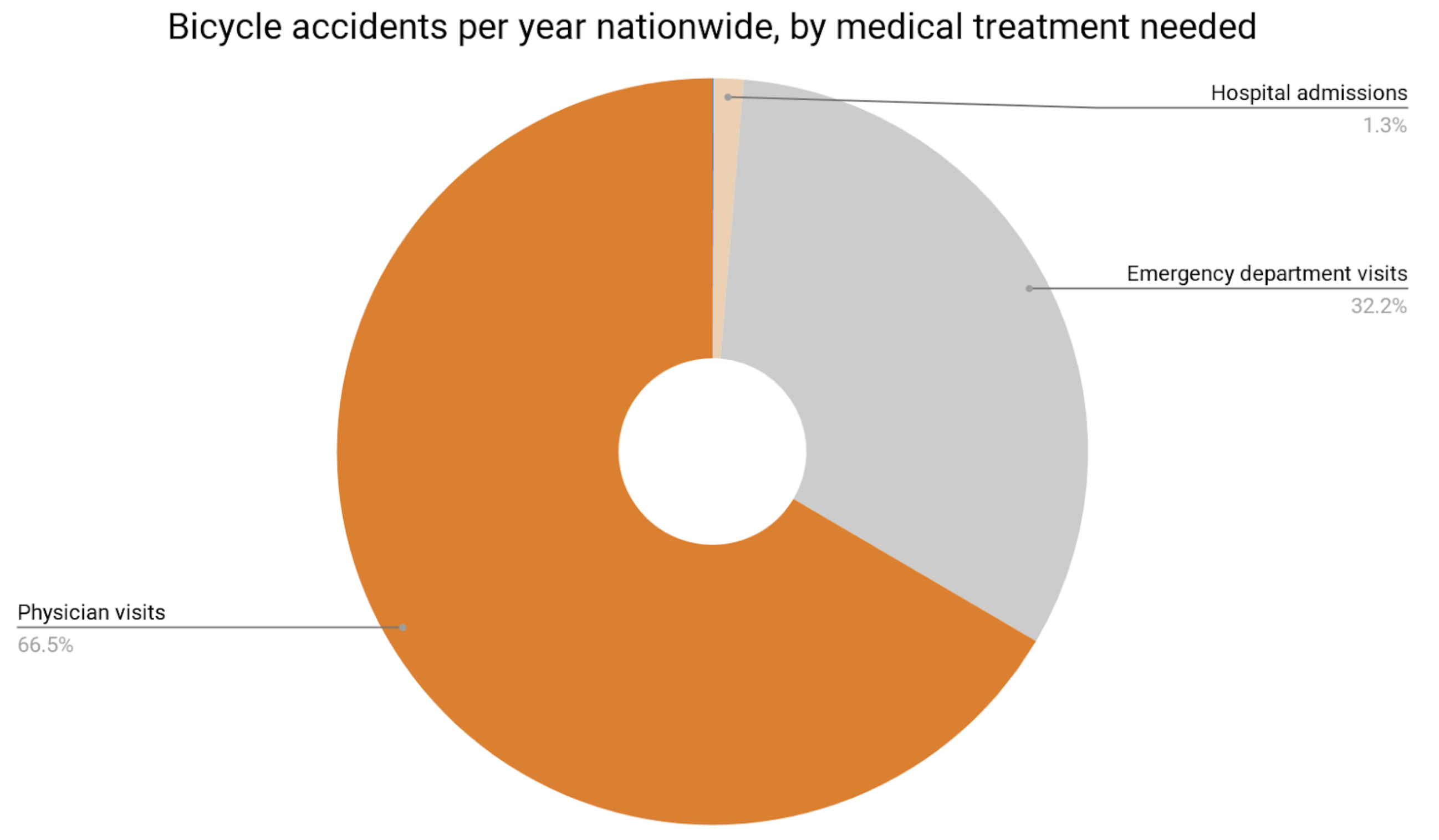 American Family Physician reports that most acute trauma bicycle injuries are to the upper or lower extremities, head, face, abdomen, thorax, and neck. Often, the superficial trauma includes abrasions, contusions, and lacerations (in other words, scrapes, bruises, and cuts).

A bicyclist in a serious accident might also suffer strains, fractures, or dislocations.

Facing factsAn estimated 22 to 47 percent of injured bicyclists suffer a head injury, often when the injury is the result of a collision with a motor vehicle. Head injuries are a major cause of most long-term disabilities associated with bicycle accidents.

A bicyclist has the same rights and responsibilities as any motor vehicle driver on the road. They must also follow right-of-way laws.

The following laws are specific to New Jersey bicyclists:

A bicyclist is required to yield to:

Sidewalks are for pedestrians

New Jersey permits 3 bicyclists to ride side-by-side if it’s not impeding traffic. You may not ride 3 or more across. If riding 2 or 3 abreast begins to impede the flow of traffic, you’re required to move to single-file riding.

In an extra-wide lane, a bicyclist can share the lane with a car traveling in the same direction.

If you’re riding in a narrow lane (10 feet wide or less), a bicyclist should take the lane and travel in the center of the lane so that an overtaking vehicle (one traveling the same direction as the bicyclist) must move left in order to pass.

If you come up to slower-moving traffic, you’re permitted to move left to pass. Even if you’re a bicyclist passing a car, drivers don’t expect to be passed on the right so you’re safer passing on the left. The same goes for passing another bicyclist. It’s safest to shout “on your left” or ring a bell if you have one before passing another bicyclist. You should always allow at least 3 feet of clearance when passing.

When you approach an intersection, move to the part of the lane that corresponds to the direction you intend to travel. If there’s more than 1 lane, use the lane for the direction you wish to turn. Still, check in front and to your rear in order to be aware of other vehicles’ movements, speed, and signals.

New Jersey law requires any bicyclist under 17 years old to wear a helmet that is properly fastened and fitted, and that meets federal safety standards. The exception is if the road is closed to traffic (like a bike path or trail).

If you’re riding at night, your bicycle must be equipped with a:

Every bicycle must also have a bell or other audible signal that can be heard from 100 feet away and that isn’t a whistle or siren.

A bicycle must have brakes that cause wheels to skid on dry, level, clean pavement.

It’s important to be aware of how bicycle accidents happen because that’s the best way to keep yourself safe.

Each state follows 1 of the 4 fault systems in the U.S., which is how it determines how much you can recover in damages for a personal injury.

This means that when an accident or injury happens, the person who was at fault (liable) is responsible for paying the injured person’s expenses (called “damages”) related to the injury.

If someone is negligent in a way that causes a bicycle injury, they would owe damages to the injured person. If you’re the plaintiff in a bicycle accident lawsuit, you can seek to recover costs for your medical treatment, property damage, lost wages from time off of work as a result of the injury, and associated living expenses. If you suffered severe injuries, you might also recover damages for pain and suffering and other types of emotional distress.

The modified comparative fault rule in New Jersey means that the injured person must be less than 51% at fault in order to recover any damages.

Bicyclist Beth is riding south on Main Street at about 20 miles per hour. It’s a busy street, but there are breaks in the traffic and the speed limit is 30 miles per hour.

Driver Douglas is driving in the same direction, traveling the speed limit of 30 miles per hour. Douglas sees Beth ahead of him and decides to pass her because he doesn’t want to be “stuck” behind a slower-moving cyclist.

Douglas doesn’t give Beth the recommended 3 feet of clearance because he wants to pass her and still remain clear of a driver coming in the opposite direction. At the same time, Beth realizes she missed the left turn she meant to take to get to her destination. She swerves to the left as she looks over her shoulder because she wants to correct her route.

Douglas and Beth collide and Beth is seriously injured. She sues Douglas for $100,000 in damages. The court finds that Douglas was liable because he failed to pass Beth safely.

But the question remains... did Beth’s quick swerve mean that she was more than 51% at fault?

That’s what the court will need to decide in order to award damages.

If the court finds that Beth was more than 51% at fault for the crash, she won’t receive any damages. If it finds that she was 50% or less at fault, she would be awarded damages reduced by her percentage of fault.

For instance, here’s how the court could rule:

What to do after a NJ bicycle accident

If you’re a bicyclist and you find yourself involved in an accident with a motor vehicle, here’s what to do if your physical condition allows it:

Enjuris tip: A picture can be worth a thousand words. Check out these tips for taking accident scene photos after a crash.

Do you need a bike injury lawyer?

There are 2 main reasons why a personal injury lawyer can help.

First, all New Jersey drivers are required to have no-fault Personal Injury Protection (PIP) insurance. The purpose of PIP is to provide immediate coverage to a driver for medical treatment without first having to deal with any questions of who was at fault for the accident.

Normally, PIP only applies to the driver (policyholder) and their passengers. In an accident with a pedestrian or bicyclist, however, the coverage also extends to the injured person.

New Jersey drivers are also required to have at least $15,000 in bodily injury coverage. But if your costs related to the accident equal more than the driver’s coverage amount, you’ll need to explore other options for recovering full damages.

Second, some bicycle accidents don’t involve other vehicles. A road obstacle, debris, or other dangerous condition could cause you to crash. In general, premises liability law says that the owner or manager of a property is responsible for ensuring that it is well-maintained and that there are not dangerous conditions for people legally allowed to use it.

For bicyclists, the property in question may be owned by a city, county, or town that maintains roads or bike lanes. If that happens, your case will be more complicated than if you were to have an accident on private property. You might need to consult a personal injury lawyer who knows the specifics about filing a lawsuit against a government agency.

In either of these situations, your lawyer is the best person to advise you on what’s your best strategy for financial recovery. Let the Enjuris law firm directory be your free source to find a New Jersey bicycle accident lawyer near you who’s skilled and ready to handle your claim.