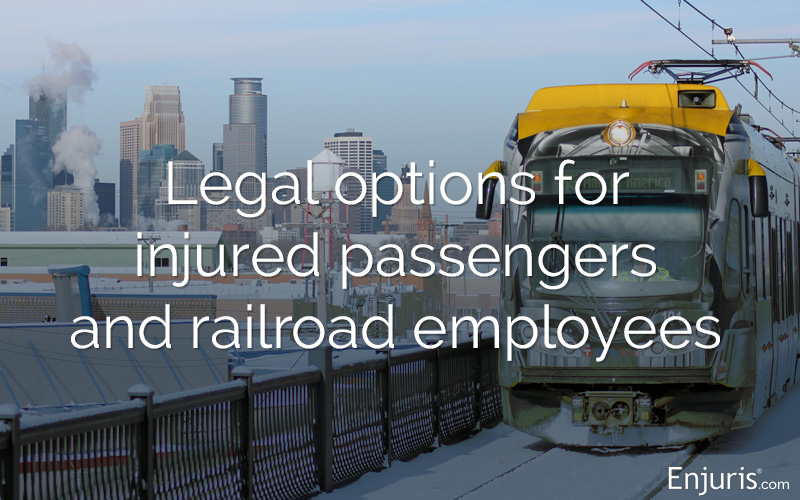 Can passengers and railroad employees recover damages after a train wreck?

Table of Contents + show
Can passengers and railroad employees recover damages after a train wreck?
Are trains safer than cars?
Why do train accidents happen?
How does an injured train passenger recover damages in Minnesota?
Wrongful death lawsuits and fatal train wrecks
Injured railroad employees and the Federal Employers Liability Act (FELA)
Statute of limitations for Minnesota train accidents
Train wrecks are typically more complicated than car accidents when it comes to recovering damages. Find out why train accidents happen, who may be liable, and when the Federal Employers Liability Act comes into play.

Minnesotans use trains for everything from sightseeing to commuting to work.

Although train travel is relatively safe, there have been some high-profile crashes in the United States over the last few years that have drawn attention to the industry.

Are trains safer than cars?

Traveling by train seems like it would be safer than traveling by car. After all, there’s no traffic, and trains are confined to a well-traveled track.

But just how safe are trains compared to cars?

On a per-mile basis, train travel is 1 of the safest ways to travel. Consider the following statistics:

To put it simply, you are 17 times more likely to die traveling the same distance in a car than on a train. The only safer way to travel is by commercial airplane.

In Minnesota, there are roughly 119 train accidents and 8 fatalities every year. The vast majority of fatalities are collisions at railroad crossings.

Why do train accidents happen?

The Federal Railroad Administration (FRA), the government agency that investigates train accidents in the United States, identified the most common causes of train accidents as follows:

When a train accident happens, it generally takes 1 of the following forms:

Train derailments are actually pretty common throughout the United States, but most don’t result in any injuries. As University of North Dakota mechanical engineering professor George Bibel explains:

“Most derailments are relatively benign and can be compared to a person walking down the street, tripping, getting back up, and continuing on her or his way. Unless derailed cars crash into houses, strike passenger trains or release hazardous material into a neighborhood, derailments do not normally affect civilians.”

How does an injured train passenger recover damages in Minnesota?

Whether or not a passenger can recover damages following a train accident in Minnesota depends on whether someone other than the injured passenger was at fault for the accident.

Parties who may be at fault for a train accident include:

If a loved one is killed in a train accident, the surviving partner, children, parents, grandparents, and siblings of the deceased may be able to receive compensation by filing a wrongful death lawsuit.

The purpose of a wrongful death lawsuit is to compensate surviving family members for the emotional and financial loss caused by the deceased’s death. Available damages include:

To receive compensation, surviving family members must prove that the defendant’s negligence or wrongful act caused the accident (just as the deceased would have to prove if they had survived the accident).

Real Life Example:Four teens were killed when the car they were riding in collided with a train at the Ferry Street crossing in Anoka, Minnesota.

The families of the deceased teens filed a wrongful death lawsuit against BNSF. The lawsuit alleged that the crossing gates and warning devices were not functioning properly. BNSF argued that the driver of the car swerved around the safety guards.

After a lengthy trial, BNSF was found 98% liable. The jury awarded the families $24 million ($6 million for each of the crash victims’ families).

Railroad employees who are injured in a train accident caused by their employer or colleague must file a FELA claim instead of a personal injury lawsuit to recover damages.

A FELA claim is similar to a workers’ compensation claim, but there are some important differences railroad employees should know about:

Minnesota limits the amount of time plaintiffs have to file lawsuits. In most train accidents, the time limit is 2 years from the date of the accident (the time limit for filing a FELA claim is 3 years).

If you fail to file your lawsuit within the time period set by the statute of limitations, your claim will be forever barred.

Importantly, the 2-year statute of limitations may be shortened or extended depending on the circumstances of the crash. It’s always a good idea to talk to an attorney as soon as possible after a train accident to make sure your legal rights are preserved.