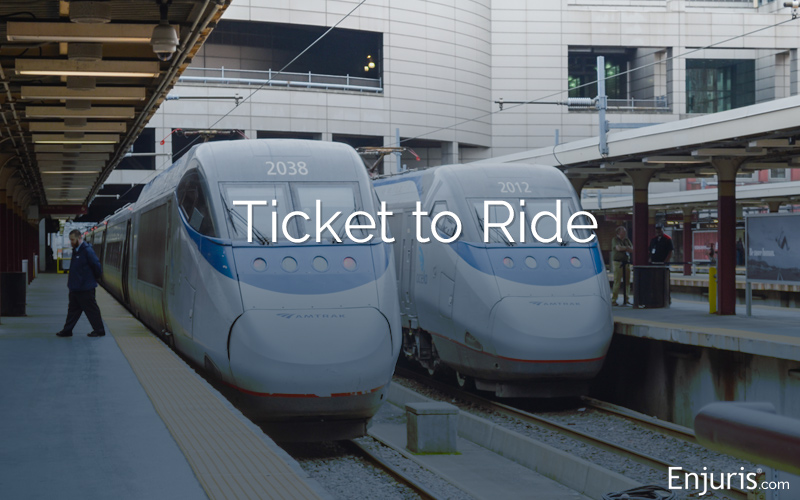 It’s rare for a train passenger to suffer an injury from an accident. You’re much more likely to be injured as a pedestrian or car driver.

If you live in Massachusetts or travel there frequently, you’re likely no stranger to the primary train network that runs from Boston to the surrounding areas: The Massachusetts Bay Transportation Authority—or, as the locals call it, the “T”.

The Massachusetts commuter rail lines include:

In addition to commuter lines, the subway also transports passengers to various points within and immediately surrounding the city, including:

Massachusetts also has 13 Amtrak locations — from Back Bay in Boston to Lenox, near the Commonwealth’s western border with New York — that are used for the Downeaster and Vermonter lines. In fact, you can travel by train from Massachusetts to Washington, DC, Philadelphia, New York City, Chicago, Virginia Beach, and other locations.

So, is train travel safe?

Yes. The likelihood of being injured or killed as a passenger on a train is low, and most train accidents involve pedestrians on the tracks or accidents with cars at crossings.

However, there have been a few instances of train crashes in Massachusetts.

Just before 6 p.m. on May 28, 2008, 2 westbound trains collided on the Green line between the Woodland and Waban stations in Newton. It was determined that the driver of the rear train went into a “micro-sleep” episode in which she lost awareness of her surroundings. The train she operated crashed into the rear of the train in front. That operator was killed and 14 passengers were injured and transported to area hospitals.

On December 11, 1990, the Amtrak Night Owl train left Washington, D.C. bound for Boston’s South Station, scheduled to arrive around 8:30 the following morning. However, a regularly scheduled commuter train was heading inbound from Stoughton to South Station at the same time. The 2 trains were on adjacent tracks that didn’t have a barrier in between. Although the speed limit for the tracks was 30 miles per hour, the Amtrak train was traveling at 76 miles per hour.

The approach to the Back Bay station is a triple-tracked tunnel. Just before arriving at the station, the Amtrak locomotive left the tracks and collided with the commuter train.

It was determined that the Night Owl had exceeded the maximum speed of 100 miles per hour because the operator was trying to make up for lost time from earlier in the trip. The train subsequently derailed and caused the collision.

Enjuris tip:In both instances, it was found that the operators had little experience. In the Back Bay incident, the engineer did not properly supervise the operator. In other words, both of these accidents were the result of human error.

In addition to those highly publicized train crashes, there have been several fatalities on MBTA tracks in recent years. The Commonwealth established an MBTA Rail Safety Committee in 2017 in order to find solutions.

Still, the accidents that resulted in fatalities related to the MBTA have been pedestrians on the tracks, not passengers on trains.

Let’s take a closer look at the typical types of train accidents:

A common carrier is any company that moves people from one place to another... in other words, engages in transportation. That includes rail companies like Amtrak and MBTA, along with bus companies, airlines, and so on.

This distinction is important because a common carrier always has a duty of care to keep passengers safe.

A railroad has specific responsibilities to passengers:

Whether a railroad is public (owned and maintained by a government agency) or private (for example, Amtrak), it is subject to strict safety regulations set forth by state and federal governments.

Federal regulations are particularly strict about limits on the number of hours a train engineer or operator may work without a break. Train personnel must get enough sleep between shifts in order to do their jobs safely and perform at their best capacity.

Despite these rules, fatigue is a problem in the railroad industry. Sometimes, a train operator must turn a train around and return it to a starting point for a new run before they can take a break — and that can mean a very long shift. And, not everyone follows the rules. Train engineers and operators do occasionally fall asleep on the job.

If you’ve been injured in a train accident, your whole claim can hinge on the issue of liability. If you’re considering filing a lawsuit, the first and most important step is to determine who was liable (at fault) for the accident.

In a car accident, it’s possible that both drivers are found to have some percentage of liability for a crash. But even if 1 driver could have acted more quickly to avoid a crash, it’s often clear which driver caused the collision.

In a train accident, it can be more difficult to figure out who was at fault. That’s why you will probably need a lawyer who understands the federal laws and regulations, and who has access to investigators and other experts who can help establish liability.

Who can be held liable for a train wreck?

These are some of the parties who could be liable for a train accident:

Some accidents don’t involve a crash or a derailment, but they’re “regular” workplace accidents like slip and fall injuries or other incidents that could happen at work.

Most people who are employed in the U.S. are covered under workers’ compensation insurance, but railroad workers are the exception.

If you’re a railroad employee who has been hurt on the job, you’d file a lawsuit under FELA. Unlike a workers’ compensation claim, a FELA lawsuit requires the injured worker to show that the railroad worker was negligent and that their negligence caused your injury.

If you were injured in a train accident in Massachusetts and you’re not a railroad employee, you might need to file a lawsuit in order to recover financial damages.

By doing so, you can recover damages for:

Aside from a large train-related disaster (which is rare), a train crossing is the most dangerous interaction with trains and the most likely way to be injured. But you can protect yourself against being involved in a train accident at a crossing.

Most trains aren’t filled with passengers — they might be cargo or freight trains and could be carrying hazardous material like toxic chemicals, flammable gases, or fluids. There’s always a risk that something could happen that would cause chemical leakage. Even if you’re certain you’re too far away to be hit by a passing train, you should maintain enough distance to be safe from any kind of substance that might be leaking.

You never know when a train is coming... even if you think you do.

There are lots of reasons why a train schedule might change; weather, loading issues, personnel, etc., could all cause delays or changes. Always take the same level of precautions when approaching or crossing tracks, even if you think the train has already passed.

There’s no comparison between the size of a train and the size and weight of your car. You won’t win at a game of “chicken” with a train. Ever.

Most cars can’t stop on a dime. A train, with all that weight behind it, definitely can’t stop quickly. By the time the conductor sees a car or person on the train tracks, it’s likely already too late to stop a moving train before a collision.

A locomotive can be 10 feet wide and 17 feet high. They’re streamlined, which gives the appearance of being farther away down the track than they actually are. If you hear or see a train, stay off the tracks until it has passed, even if it looks or sounds like it’s far away.

5. Avoid recreation on or near railroad tracks.

Railroad tracks aren’t where you should go for walking, biking, hiking, motorcycling, taking pictures or other activities.

Why you need a train accident lawyer

If you’re involved in a train accident, it’s likely a newsworthy occurrence. That means there could be lawyers who see the event on the news and seek you out with offers to represent you in a lawsuit. This is not permitted and not ethical.

A lawyer may not solicit your business if you don’t have a preexisting relationship.

Instead, you should find your own Massachusetts personal injury lawyer who specializes in train accident cases like yours. Enjuris offers a variety of resources: