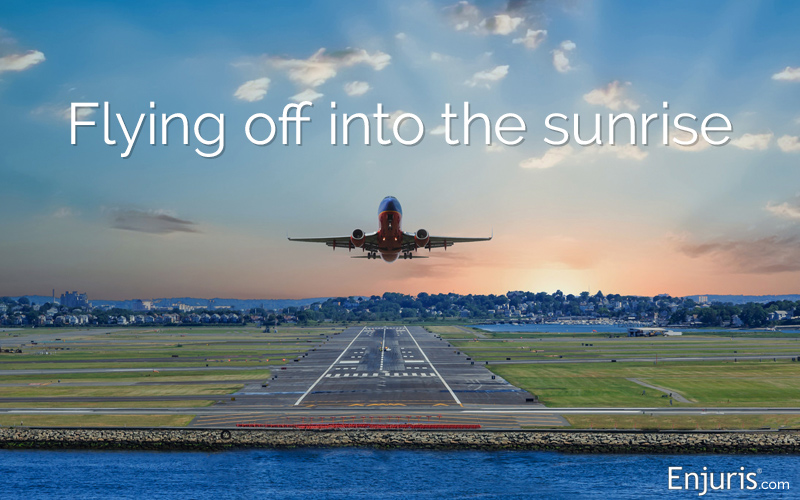 When it comes to private and commercial flying, the odds are in your favor.

Some estimates indicate that your chances of being in a fatal plane crash are better than 1 in 12 million. In other words, there is about 1 fatal crash for every 5.58 million flights.

One member of the U.S. National Transportation Safety Board (NTSB) says the reason for this is that the industry is so highly regulated, there’s a tremendous amount of oversight, and pilots and crew have meaningful training.

However, the odds are a little different if you’re traveling in a small plane. You’re probably aware of plenty of small plane crash fatalities... like the ones that killed John F. Kennedy Jr. and Carolyn Bessette-Kennedy in 1999, John Denver in 1997, Aaliyah in 2001, and more recently, Kobe Bryant and his daughter Gianna in 2020.

Real Life Example:In 2019, a small plane crashed at Mansfield Municipal Airport in Massachusetts and 2 people were killed. A pilot died after taking off in a small plane from Sterling Airport in Worcester County in early 2020.

You might also remember World Airways Flight 30, a McDonnell Douglas DC-10-30CF airliner that had a fatal accident on landing at Boston Logan International Airport in 1982. The flight was en route to Boston from Oakland, California, after a stop in Newark, New Jersey. An icy runway caused the plane’s brakes to fail. The plane skidded off the runway, across a field and a taxiway, and then finally stopped in Boston Harbor. 201 passengers and crew survived, but 2 passengers were never found.

Commercial aviation is any scheduled air transport. Any non-military and non-scheduled flights are classified as general aviation (GA) — in other words, any civilian flight except passenger airlines.

According to the Federal Aviation Administration (FAA), the top causes of fatal GA accidents are:

However, the majority of aviation accidents and plane crash happen for 1 of 3 reasons:

The FAA requires a private pilot to log a minimum of 40 hours’ flight time before becoming licensed. To become a licensed pilot, you must also pass a medical exam, knowledge test, final flight test, and TSA authorization.

Pilot inexperience is a huge factor in small plane accidents. Just like the driver of a car must know how to handle an icy patch on the road, a pilot must be skilled and experienced in dealing with an unexpected event that crops up. Storms, wind, and other elements can make for hazardous flying.

Likewise, some mechanical malfunctions can be successfully handled mid-flight. If the pilot knows the mechanics of the plane and can figure out how to properly and quickly respond to the problem, they might be able to land without incident.

If there’s a severe storm, a large jetliner can usually climb to a higher altitude that allows it to soar over the storm. But a small plane is more susceptible to sudden bad weather conditions. A lightning strike could cause complete electrical failure or other problems.

Any small plane pilot needs to be tuned in to weather conditions, both actual and anticipated, and modify their flight course accordingly.

Plane travel is a double-edged sword. Although a commercial flight is much safer than a small aircraft flight, if a crash were to occur you’re much more likely to survive if you’re on a small plane than a large jetliner.

A small plane could force a landing in a rural or unprepared area, whereas a commercial jetliner likely can’t due to its size and speed of travel. A small plane has a better chance of managing to coast to an unexpected landing. Even so, an equipment malfunction can lead to tragedy. Even the most experienced pilot can only do so much if the plane’s equipment fails.

Boeing launched a new automated flight control, called the Maneuvering Characteristics Augmentation System (MCAS) in November 2018. In some circumstances, the system would repeatedly push the nose of the airplane downward, but Boeing emphasized a procedure that would allow a pilot to recover a plane from this malfunction and “save” the aircraft. Boeing was supposed to deliver a software update to the system by April 2019.

By March 2020, Boeing had incurred costs of $18.6 billion, between compensation to airlines and victims’ families, lost business, and legal fees. It had ceased production of the MAX earlier in the year.

In November 2020, the FAA cleared the MAX airliners to return to service following repairs to defects and pilot training and ended the 20-month flight ban.

If you’re in a plane crash or any aviation accident that involves a commercial airline, it has a heightened duty of care to passengers because an airline is a “common carrier.” A common carrier is any mode of transportation that’s offered a service to the public and has a higher duty of care for safety —  this could include buses, taxis, cruise ships, etc.

Whether or not the crash was a general aviation aircraft or a commercial plane, there are usually 2 possible causes of action for a plane crash: negligence and strict liability.

A flight crash investigation could take months. Regardless of whether lawsuits are filed, the FAA and the NTSB investigate any crash because they want to know what went wrong in order to prevent future accidents.

Negligence is when a person or entity causes injury by creating a hazardous situation or failing to avoid a hazard to another person.

In a plane crash, negligence could be attributed to the following parties:

Why the federal government?

If you work for an airline or airport and you’re injured while at work, you might be eligible for workers’ compensation benefits.

Flight attendants and other crew members can be injured in other ways besides plane crashes. Many flight attendant injuries are related to heavy lifting — like neck, shoulder, or back injuries. They might also suffer from Shift Work Disorder (SWD), which is when physical conditions can arise from constant schedule changes that disrupt the body’s circadian rhythm (your inner “clock” that helps you sleep).

Workers’ compensation is a no-fault insurance benefits system that provides coverage for medical treatment and a portion of lost wages to a worker who was injured on a worksite or while performing tasks related to their job, regardless of whether anyone was negligent.

Enjuris tip:If you were seriously injured at work, there might be a third party who’s responsible for covering your damages. If an entity other than your employer was liable for your injury, you can file a third-party claim.

If you’ve lost a family member in a plane crash, your method for financial legal recovery is to file a wrongful death claim.

A wrongful death claim is similar to a personal injury, except that it’s to compensate the survivors for damages like emotional, financial, and other support that the deceased person contributed to their household.

You can also file a survival action, which pays damages for injury suffered by the victim because of the defendant’s actions, like pain and suffering, medical bills, and other costs.

Types of injuries from a Massachusetts plane crash

Plane crashes are often fatal but occasionally result in minor injuries. The most common injuries related to plane crashes include:

Damages from a Massachusetts plane crash

“Damages” are costs related to any personal injury. The theory of personal injury civil lawsuits is that a plaintiff (the injured person) is entitled to be made whole through the court system. In other words, you can recover financially to restore you to the position you’d be in if the accident had never happened.

If you survived a plane crash, you can recover damages that include:

Regardless of whether you were involved in an accident while on a small private plane or a commercial airline, it’s important to consult with an experienced lawyer to help you reach a full and fair financial settlement.

Here are some Enjuris resources to help you find the Massachusetts lawyer who can help: