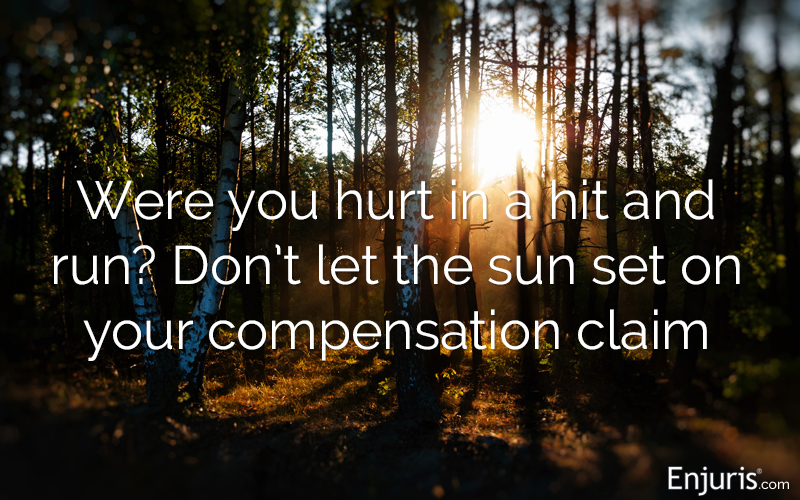 Table of Contents + show
Recovering damages after a hit and run can be more difficult than a car accident where all the parties are identified
How to recover damages after a Maryland car accident
Maryland hit and run laws
How does a victim prove a hit and run?
Hitting a parked car
What if the hit and run driver is never identified?
What to do if you’re the victim of a hit and run accident
What if you’re rear-ended in traffic and the driver swerves around and speeds off? You’re left with damage, perhaps an injury, and no identification to recover costs for your treatment or repairs. What do you do next? Here’s what to do and how to handle a Maryland hit and run.

A hit and run is a crash or collision where a driver flees the scene or fails to provide the correct identifying information in order to be held responsible for the crash.

In Maryland, there are steep penalties for drivers who leave the scene of the crash, but it’s also a problem for the victims.

How to recover damages after a Maryland car accident

Maryland follows an at-fault system for damages. If you’re in an accident, the at-fault driver is financially responsible for the damages — or costs — related to the crash.

In general, there are 2 ways to recover damages from an accident: insurance or personal injury lawsuit.

In Maryland, if you’re the injured person, you would generally make a claim on the at-fault driver’s insurance policy.

Insurance covers some damages, but not all. For instance, pain and suffering or future lost earning capacity wouldn’t be included as part of an insurance settlement. If your injuries are severe and cost more than the policy limits, you might not be able to recover all of your costs from an insurance policy.

If the other driver’s insurance doesn’t cover the full extent of your damages, your underinsured motorist policy should cover outstanding costs.

Underinsured motorist (UIM) coverage is designed as an “overflow” policy that you can use if the at-fault driver has insurance but not enough for your damages.

Uninsured motorist (UM) coverage is used when the at-fault driver either doesn’t have insurance, or if the accident is a hit and run and the driver can’t be identified.

A Maryland driver is required to have a minimum of $30,000 per person and $60,000 per accident in uninsured bodily injury coverage, and $15,000 in uninsured motorist property damage coverage.

But what if it’s still not enough?

In a serious accident, medical bills can pile up quickly. Treatment is expensive, and even a short hospital stay or a seemingly minor surgery could be very costly.

A hit and run — when the driver flees the scene — only applies in Maryland if there’s bodily injury or property damage.

However, as a driver, it’s not a good idea to assume that because there’s no immediately visible damage, you can just leave.

The penalties for a hit and run are strict and it’s better to err on the side of caution by leaving your information and hoping it never needs to be used, rather than leave the scene and find out later that there was damage or injury that you didn’t realize at the time.

If you’re involved in an accident in which there is property damage, injury, or death, you must do the following:

You may move your car if it’s drivable after an accident. You should immediately pull off the road and into a safe location, but stay as close as possible to the scene.

Penalties for a Maryland hit and run

In addition, a hit and run usually results in 8-12 points on your driver’s license.

How does a victim prove a hit and run?

It’s important to note that a hit and run could be handled in both criminal and civil court. As a victim, your best recourse against a hit and run driver is to file a claim with their insurance or file a personal injury lawsuit.

If you file a lawsuit, the fact that the driver was charged with a hit-and-run crime related to the accident will certainly be important evidence to support your claim. However, you’ll still need to prove by a preponderance of the evidence that the defendant caused your injuries.

In other words, the judge or jury needs to find that there is more than a 50% chance that the defendant was liable.

Are there defenses to a hit and run?

There are ways that a driver might claim that they don’t deserve a hit-and-run charge. Often, these same defenses can help them to avoid financial responsibility for an accident, too.

A hit and run accident involving a parked car is treated the same as any other hit and run.

If you discover that your parked car has been damaged, then what?

Hopefully, the person who hit your car will have left a note with the required information as required by law.

If not, you will need to file a claim under your own uninsured motorist policy in order to receive compensation for property damage. There will be a state-mandated $250 deductible. Your insurance company might also require you to have a police report for any hit and run, so be sure to call the police immediately when you discover that your car has been damaged.

Enjuris tip:If you hit a parked car or another stationary object, you can avoid a hit and run charge by leaving a note if you can’t identify or locate the owner. The note must contain all required information (name, address and vehicle registration number).

It’s a good idea to keep a waterproof pen or marker, a piece of paper, and a plastic bag in your car. If it’s raining, leaving the note inside a clear plastic bag on another car’s windshield will protect it from becoming wet or destroyed.

What if the hit and run driver is never identified?

If the responsible driver is never identified or located, you can file a claim on your uninsured motorist policy, as long as there is a police report verifying the circumstances of the accident.

But unfortunately, if the driver isn’t identified, then you can’t file a personal injury lawsuit because you wouldn’t know who to sue.

However, the police have ways to identify hit and run drivers. When you call the police, they will review the evidence, look for witnesses, trace license plates, and use other methods to try to find the driver. It could take some time, but law enforcement might be able to be a significant help to you in seeking compensation for a hit and run.

Regardless of whether you discovered damage to your parked car or you were hit while in traffic, here are some tips for how to handle a hit and run:

Enjuris tip:If you want to be sure another driver is providing you with correct information following a wreck, ask to take photos of their license, registration, and insurance card. There’s less opportunity for error than if you’re trying to copy information by hand, and it also helps to ensure that the information is accurate.

Even if the driver is uncooperative, if you’re able to quickly photograph or write down the license plate number, that will be tremendously helpful to identify the individual. Law enforcement can quickly and accurately track a vehicle by its license plate.

Enjuris tip:If your car was hit in a parking area, there could be security footage that helps lead police to a defendant.

A hit and run, by nature, involves an uncooperative driver. There are lots of reasons why someone might leave the scene of an accident. Perhaps they don’t have insurance, they don’t have a license, it’s a teen who’s worried about their parent’s reaction, someone who has previous traffic violations or outstanding arrest warrants, or just someone who panicked in the moment and made a poor judgment.

But you shouldn’t have to pay for someone else’s mistake.

An experienced lawyer has access to investigators, medical experts, financial professionals, and others who can help you receive damages. Let the Enjuris lawyer directory be your source to find a Maryland personal injury lawyer who can take a closer look at your hit-and-run claim.