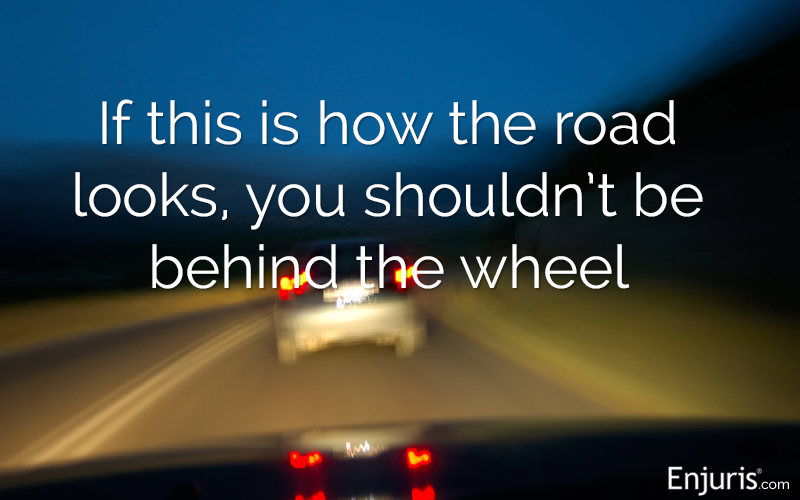 Table of Contents + show
How to recover compensation following a car accident caused by a drunk driver
Maryland drunk driving laws
Maryland DWI/DUI penalties
Recovering damages from a Maryland alcohol-related accident
Maryland negligence law
Maryland dram shop law and social host liability
How to spot a drunk driver
Need advice from a Maryland car accident lawyer?
If you’ve been drinking, don’t drive. It’s as simple as that. But you can’t control other people’s behavior, which means no matter how careful you are, you can still become a victim of a drunk driving accident. Here’s what to do if you’ve been injured and a guide to Maryland drunk driving laws.

Nearly 30 people in the U.S. die in drunk driving crashes every day, which is more than 1 per hour.

Facing factsIn 2018, 24% of fatal crashes in Maryland were alcohol-related.

Drinking and driving isn’t a victimless crime. While it’s true that many alcohol-related crashes involve a single vehicle—the impaired driver’s car—there are still far too many multi-vehicle wrecks.

Check out the 2 charts below to compare single-vehicle vs. multiple-vehicle alcohol-related fatal crashes in Maryland in 2018: 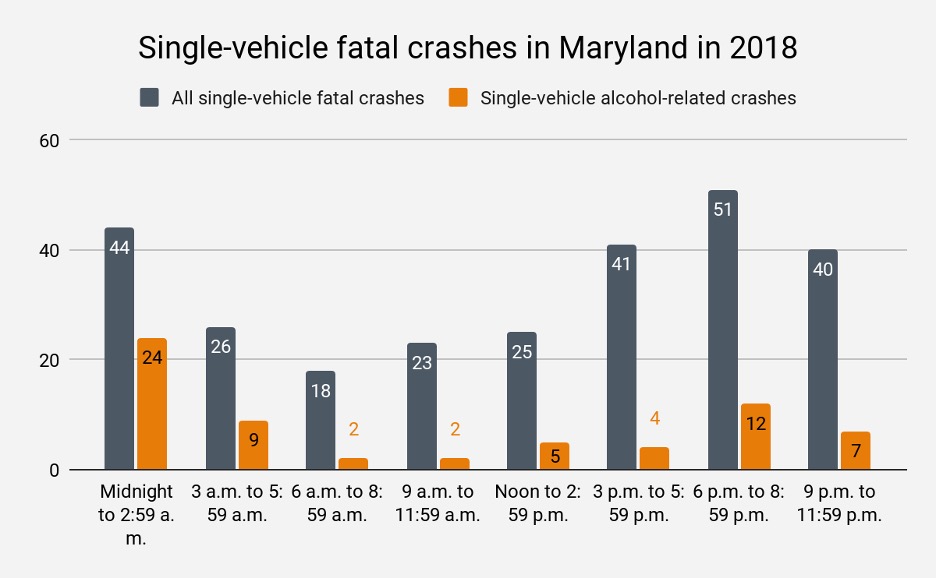 Maryland laws include DUI and DWI as separate offenses.

Maryland Driving Under the Influence (DUI)

A DUI is more severe than a DWI in Maryland. You can be charged with a DUI if your blood alcohol concentration (BAC) is .08% or higher. Maryland law calls this “under the influence per se.”

If you’re convicted of a DUI, you will receive 12 points on your license, which makes you eligible for license revocation.

Driving while impaired, or DWI, is a lesser charge than DUI. You can be charged with a DWI if your BAC is .07% and you’re presumed to be impaired. The prosecutor is required to present less evidence for a DWI conviction than for a DUI. In order to be convicted of a DWI, the prosecutor must only demonstrate that the driver’s normal coordination was somewhat impaired by alcohol or drugs.

If you’re convicted of a DWI in Maryland, you’ll receive 8 points on your license and could have your license suspended.

Maryland’s Drunk Driving Reduction Act of 2016, also known as “Noah’s Law,” requires that any driver who is convicted of an alcohol-related driving offense must install an ignition interlock device (IID) in their car.

The law is named for police officer Noah Leotta, who was killed by a drunk driver at a sobriety checkpoint. This device requires a driver to blow into it so that the device can register the driver’s BAC before the car will start. The length of time an IID will be required depends on the offense.

For the most part, a sentence or penalty for an alcohol-related offense will depend on whether you have prior convictions.

If you have a minor passenger in the car and you’re impaired, you face a maximum of 1 year in jail and $1,000 in fines for a first offense, and up to 2 years in jail and $2,000 for a second offense.

There are also license suspensions for various aspects of a DUI:

If you’re a victim who was injured as a result of an alcohol-related accident, knowing that the drunk driver was convicted of a DWI or DUI might help you to feel that justice was served. Unfortunately, that doesn’t help you to recover the financial costs and expenses that you incurred from your injuries.

If you were injured as a result of an accident and the injuries cost money, you can recover costs from the at-fault driver.

There are 2 ways to recover costs — known as “damages” — for a drunk driving accident:

Enjuris tip:If you’re in an accident with an uninsured driver, your insurance company is required by law in Maryland to reduce your deductible to $250.

Types of damages you can recover from an accident

If you were involved in any type of personal injury accident, you may be able to recover costs that include:

Insurance should cover medical expenses, property loss, and lost wages. If you expect to recover costs for other things, like pain and suffering or future earning capacity, you’ll need to file a lawsuit.

Maryland follows the pure contributory negligence rule of fault. Therefore, if you had any fault for the accident, you can’t recover any damages from the other party in a lawsuit.

Why is this important in a drunk driving injury case?

Defendant David had too many beers at a party and decided to drive himself home. He didn’t know it, but his BAC was well over the legal limit and he was not safe to drive.

Plaintiff Patty was on her way home from work. She’d had a particularly difficult shift and was eager to get home and take a nice soak in her bathtub and enjoy a home-cooked meal.

As David was driving north on Main Street, Patty was heading south. They were on opposite sides of a 2-lane road divided by a double-yellow line. Not realizing that Patty was approaching, David began to swerve and crossed the yellow line, causing a head-on collision with Patty’s car.

Although David’s insurance covered some of Patty’s expenses, it didn’t cover all of them. Patty filed a personal injury lawsuit against David to recover the remaining costs for her medical treatment.

Although Patty was in her own lane, the accident investigators determined that she was driving 45 miles per hour in a 30 mile per hour speed limit zone. Although David was responsible for the crash, his lawyers argued that if Patty had been driving the speed limit, she would have been able to react quickly enough to move out of the way of David’s car and avoid an accident. The court found that David was 90% responsible for the damages, and Patty had 10% of the liability.

Under Maryland fault laws, Patty wouldn’t be able to recover any damages from the lawsuit.

Unlike many states, Maryland doesn’t have a dram shop law that would hold a business (such as a bar or restaurant) responsible if a patron causes an accident while drunk after leaving the business.

However, Maryland does have a social host liability law.

An adult who provides alcohol to a minor in a social host situation could face criminal penalties. However, a plaintiff in a drunk driving accident is not permitted to sue the host for injuries caused by the minor. Maryland also doesn’t permit a plaintiff to sue the host after being injured by a guest who was intoxicated.

How to spot a drunk driver

You can’t change another person’s behavior, but you can be on the lookout to reduce your own risk of being injured in a drunk driving accident. Mothers Against Drunk Driving (MADD) offers these common signs of drunk driving:

Most importantly, don’t be a drunk driver!

Always make sure you have a designated driver. If you’re heading out (or drinking at home), be sure that someone in your party knows they’re the designated driver and that they’re not planning to drink any alcohol. Alcohol consumption affects everyone differently, and even a small amount can affect your ability to drive safely.

If you end up drinking even though you didn’t plan to, find a safe ride home. Either call a sober friend or family member, or use a taxi or rideshare service (for example, Uber or Lyft).

Finally, don’t attempt to stop a drunk driver you don’t know on your own. You don’t know if the person will become angry or violent, and you could make a bad situation worse by attempting to confront them. Call the police, instead — that’s their job and they know how to handle it.

If you’ve been injured by a drunk driver — or any driver — and you believe you’re entitled to recover compensation for your injuries, we recommend at least talking to a personal injury lawyer to understand your rights.

An experienced lawyer can help determine fault for the accident, figure out how much you should recover in damages, and guide you through the best way to recover the full amount. The Enjuris Personal Injury Law Firm Directory is a comprehensive and free source for finding a Maryland lawyer near you who’s experienced and ready to talk.