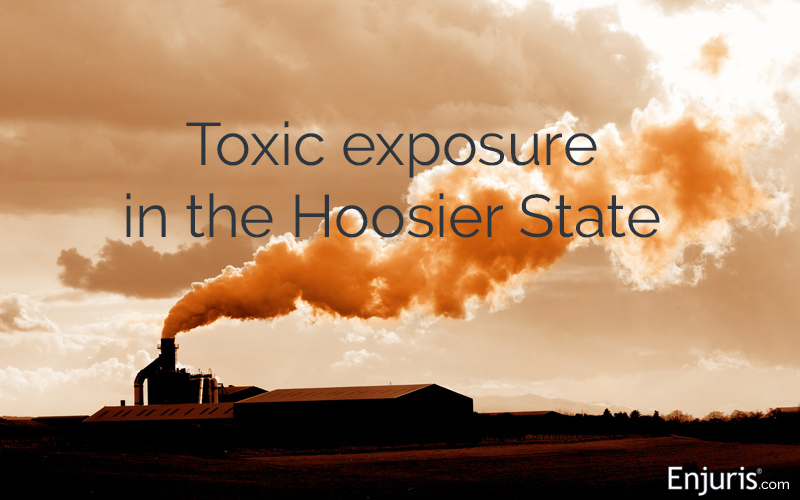 Recovering damages after being exposed to a toxic substance

A “toxic tort claim” alleges that a toxic substance injured the plaintiff or their property.

Exposure to toxic substances can occur in a variety of settings, including the workplace, the home, and even the great outdoors.

In this article, we’ll take a look at Indiana toxic torts, including the legal theories used to establish toxic tort claims, who can be sued, common defenses, and the damages that may be available.

Toxic tort claims arise from a wide variety of factual situations and under differing legal theories, but toxic tort claims have several characteristics that make them different from other tort claims:

Real life example: You might’ve heard in the news about a variety of Monsanto Roundup lawsuits that relate to people who’ve become ill following exposure to its active ingredient, glyphosate.

Causes of action that support a toxic tort claim

A “toxic tort” is a type of claim, but it’s not a theory of liability. There are a number of legal theories you can use to establish liability for a toxic tort in Indiana. The most common legal theories include negligence, strict liability, private and public nuisance, and workers’ compensation.

In toxic tort cases where negligence is alleged, the plaintiff must establish the traditional elements of negligence:

A class of nearby plaintiffs, injured when they were exposed to contaminants through their drinking water, sued Firestone under the legal theory of negligence. The plaintiffs were able to prove that the hazardous waste disposed of by Firestone was the source of the contamination.

In toxic tort cases where strict liability is alleged, there’s no need to prove fault. Rather, the plaintiff need only prove that the activity causing the harm was “abnormally dangerous.”

In determining whether an activity is abnormally dangerous, Indiana courts consider the following factors:

The most common example of strict liability is product liability. When a company makes a product available to others that is unreasonably dangerous (even when used properly), the company will likely be held strictly liable for any injuries that result from the dangerous product.

Indiana defines a “nuisance” as:

In Indiana, a successful nuisance claim requires “ongoing and continued behavior.” In other words, the nuisance must currently exist or must be ongoing at the time the lawsuit is filed in order for the plaintiff to be successful.

Unlike most civil lawsuits, a workers’ compensation claim doesn’t require you to prove that your employer did anything wrong. However, there are a number of procedural steps that must be followed.

This means the plaintiff must prove that:

Enjuris tip: Learn more about proving causation, including the but-for and substantial-factor tests.

Proving causation in a toxic tort case is particularly difficult for 2 reasons:

Who can be sued in an Indiana toxic tort case?

It’s not always easy to determine who’s responsible for your toxic tort exposure. Fortunately, toxic tort attorneys have experience investigating all the potential defendants, which may include:

To be safe, toxic tort attorneys will often file a lawsuit against all potentially-liable defendants and let the defendants fight over liability among themselves.

Statute of limitations for toxic torts

In Indiana, the statute of limitations for a toxic tort claim is generally 2 years.

Enjuris tip: A number of factors can impact the deadline for filing your lawsuit. For example, the clock generally doesn’t start running until you show symptoms (which might be years after the initial exposure). To avoid any complications related to the statute of limitations, talk to an attorney as soon as you think you might have a toxic tort claim.

What damages are available in an Indiana toxic tort case?

In Indiana, there are 3 basic types of damages available in a personal injury lawsuit:

Enjuris tip: Find out more about the damages available in an Indiana personal injury case.

Should you meet with an Indiana injury attorney near you?

There are 2 common complaints among plaintiffs when it comes to compensation in Indiana toxic tort cases:

Nevertheless, large settlements and judgments are relatively common. If you believe you’ve been injured by a toxic substance, consult with an Indiana attorney as soon as possible to discuss your legal options.