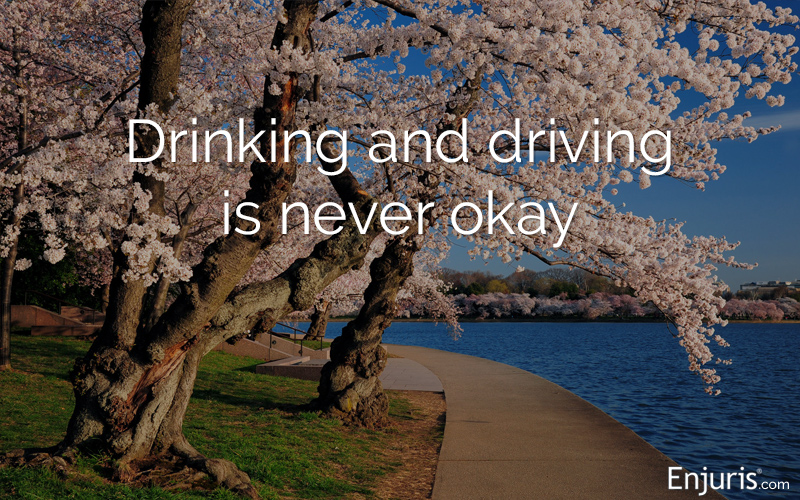 Have you ever thought, “I’ll just have just 1 drink before I drive home”?

Lots of people do. And it’s a mistake. Even though you might feel like you’re “fine” to drive (and maybe you are), any person who drives while under the influence of alcohol is behaving negligently. Negligence, itself, has legal consequences if you’re in an accident — even if you didn’t cause it.

The District of Columbia sees about 2.3 alcohol-related fatalities per 100,000 people, according to recent data from the American Addiction Centers. However, D.C. had the lowest rate of DUI arrests compared to the states, with 3.2 arrests per 100,000 people.

But don’t be fooled — 3.2 per 100,000 people is still nearly 14,000 DUI arrests per year. Nearly ⅓ of all the traffic deaths in the District involved drunk drivers.

There are some concerning trends appearing regionally in the past few years. According to the Washington Post, Arlington, Montgomery and Prince George’s counties saw their numbers of alcohol-related traffic fatalities double in 2017.

Real Life Example:In southern Prince George’s county, 3 children were killed when a drunk driver hit the car they were riding in. The drunk driver had a blood-alcohol level of more than twice the legal limit.

BAC is a measurement of how much alcohol is in a person’s bloodstream. It’s the primary metric used in determining whether a person is too drunk to drive.

The police can measure how much a person has had to drink by testing either their blood or breath. They also observe the person’s behaviors and might ask for certain physical tests (like walking in a straight line), but BAC through blood or breath is considered accurate enough to issue a DUI penalty.

Many police agencies use a Breathalyzer test for BAC, where the driver blows into a device that provides a reading of their BAC. The breath test is considered equivalent to a blood test and is more commonly used because it’s easier to take a breath test than a blood test at the scene of an accident or when a driver is pulled over on the road.

How can I determine my BAC?

Not easily. You cannot determine your own BAC without a Breathalyzer device or blood test.

There are several factors that affect a person’s BAC, and these factors can vary from day to day based on certain physical or emotional conditions.

There are 6 primary factors that affect your BAC:

Your BAC can also be affected by stress or other emotional factors, along with the type of alcohol (and type of food) consumed. Your body processes approximately 1 drink per hour, and you really can’t force yourself to “sober up” any faster. You need to wait until your body has metabolized the alcohol before you may drive safely.

The legal drinking age in the District is 21.

District of Columbia penalties for drinking and driving

If you’re convicted of an alcohol-related offense, here’s what you might be looking at for penalties:

Any driver convicted of an OWI, DWI or DUI will have their license restricted. If they have a 3rd offense within 5 years, they will also have a 5-year license revocation. If an offense results in bodily injury, death, or a felony, their license will be permanently revoked. The driver’s vehicle is impounded for 24 hours following an alcohol offense.

They must also install an ignition interlock device (IID) for between 6 months and 2 years, depending on their offense.

In addition, there are aggravating factors that can increase penalties:

If you’re a victim of an alcohol-related traffic accident, it’s important to know how to pursue damages.

“Damages” is the legal term for money a plaintiff (injured person) can receive from a liable party (defendant) who caused an accident. The purpose of damages is for a plaintiff to be made whole by the legal system — or to be restored to the financial status you’d be in if the accident had never happened.

The driver who caused the accident can be charged with an alcohol-related traffic violation. Their charges and subsequent penalties might offer you a sense of justice or satisfaction, but they don’t impact your civil claim. Sometimes, criminal charges are excluded as evidence in a civil lawsuit.

The District is a no-fault insurance jurisdiction, which generally means that your own insurance company pays for your minor injuries in an accident, regardless of who was at fault.

This can include expenses for medical treatment, lost wages, and other costs related to the accident.

You might also have Personal Injury Protection (PIP) insurance. It’s optional, but helpful in certain situations.

After an accident in the District, you have 60 days in which to elect to use your no-fault option or to file a personal injury claim against the at-fault driver. If you choose no-fault, you are not permitted to submit a claim against the driver later.

There are 2 exceptions, however, where you may later sue the at-fault driver:

A “significant impairment” is a permanent impairment, scarring, or disability that lasts 6 months or longer. If you meet these criteria, you may file a claim on your own PIP policy and a claim against the at-fault driver’s policy.

If your injuries fall into 1 of these exceptions, you can file a personal injury lawsuit.

In Washington, D.C., if a plaintiff has any degree of fault, they can’t recover damages for an accident.

Even if the defendant was drunk, if you were also partially liable, then you can’t recover damages in a lawsuit against the drunk driver. You’d be limited to whatever damages you can recover through your own insurance policy.

For instance, let’s say the drunk driver sped through an intersection and went through a red light without stopping. You had the green light when you were hit, but their attorney argues that at the time of the accident, you were checking a text on your phone. If they can prove that you would have been able to avoid the accident if you weren’t using your phone at the time, you won’t recover damages.

The drunk driver isn’t the only person who could be liable for damages in an accident, even if they ultimately caused the collision.

Here are some other possibilities for negligent parties:

The District allows for a plaintiff injured in a drunk driving accident to sue a bar or restaurant that served the driver alcohol after knowing that they appeared intoxicated. The establishment could also be held liable if it served alcohol to a person under 21.

You can sue a person who allowed another person to drive if they knew the driver was intoxicated.

If an accident happened when the drunk driver was working, the victim may be able to file a lawsuit against the driver’s employer under the legal doctrine of respondeat superior.

How to spot a drunk driver

If you suspect that a driver is drunk, call 911. A police report is important after any accident, but especially if the driver is drunk. If the driver flees the scene, try to get as much information as possible. If you can quickly write down or photograph the car’s license plate, make and model, and color, that will be helpful to the police in identifying and locating the driver.

If the driver remains at the scene, let the police handle them. You don’t want to put your own safety at risk if the person is violent or behaving erratically.

Avoid drunk driving — for yourself and your friends or family

You should always be wary of your own alcohol consumption and that of your family or friends.

Be a responsible driver by following these 4 tips:

There are a lot of factors that make a drunk driving accident particularly complex. For one thing, there could be criminal charges and a civil lawsuit happening simultaneously.

For another, factors like where and how the driver became drunk could be important and relevant, too.

Finally, drunk driving accidents often lead to more severe injuries than a “typical” fender-bender or minor accident. That means you could be entitled to receive more than what insurance offers as a settlement. The insurance company will cover your medical expenses and lost wages — within your policy limits. But for a serious accident, costs could be far more than what insurance provides.

In addition, insurance doesn’t cover damages like emotional distress or pain and suffering.

If you believe you’re entitled to more compensation than insurance provides, your best move is to call a Washington, D.C. personal injury lawyer.