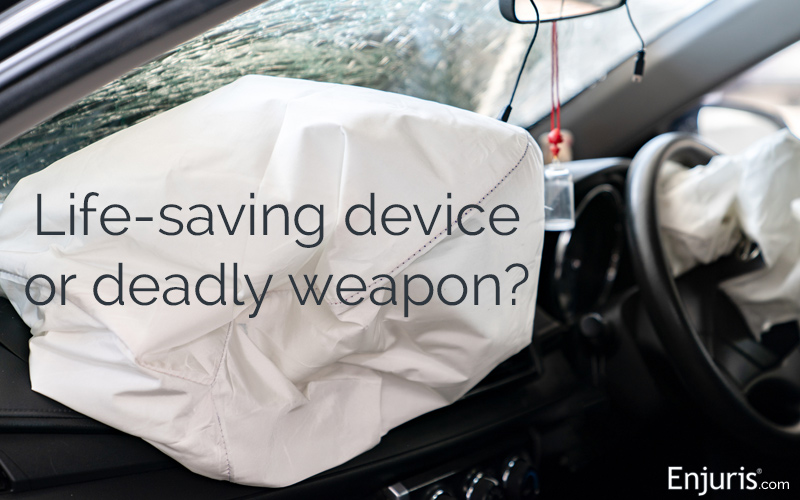 Can you sue a manufacturer if the airbag in your vehicle is unsafe?

Table of Contents + show
Can you sue a manufacturer if the airbag in your vehicle is unsafe?
How do airbags work?
Common airbag deployment injuries
Can I file a lawsuit if I suffered an airbag injury?
What damages can I recover in an airbag injury lawsuit?
Takata airbag recall and lawsuits
How do I find an airbag injury lawyer?
Connect to top-rated lawyers in seconds using our comprehensive national directory
The massive Takata airbag recall has caused many drivers and passengers to think twice about the airbags that are supposed to be protecting them. Find out if and when airbags can do more harm than good, and learn whether you can file a lawsuit for an airbag injury.

Front airbags have been required in all vehicles in the United States since 1999, and many vehicles are equipped with optional side airbags.

The purpose of an airbag is to reduce occupant injury in the event of a crash by reducing the speed of impact, softening the blow, and spreading the impact over a larger area of the body.

So what happens if your airbags end up doing more harm than good?

How do airbags work?

Airbags rely on the physics of a crash to work effectively.

“In the case of a head-on collision, a car usually stops fast. The body of the driver, of course, doesn’t. Its momentum continues until an outside force brings it to a stop. An airbag doesn’t just soften the blow. It actually lowers the impact by stretching it out over a longer period of time. That’s why airbags inflate and then quickly deflate—to gradually bring the driver’s momentum from 60 mph to 0.”

But how does an airbag actually deploy?

When your vehicle collides with something solid, a sensor (called an “accelerometer”) triggers a circuit that fires off an electrical current. The current ignites a charge that explodes. The explosion produces nitrogen gas, which fills the deflated airbag (packed into your steering column, dashboard, or car door) at about 200 miles per hour.

The whole process, from the time the sensor detects the collision to the time the airbag is fully inflated, takes only 30 milliseconds (0.03 second).

Facing factsToday, roughly 190 million vehicles in the United States are equipped with airbags. But there was a time, not that long ago, when automakers were leery of airbag technology and concerned that airbags would discourage people from using seat belts. Airbag technology existed in the 1950s, but as late as 1984, most automakers strongly opposed them.

Experts agree that airbags are very effective in saving lives, but the speed at which an airbag deploys can cause injuries. Common airbag deployment injuries include:

A review of U.S. National Highway Traffic Safety Administration (NHTSA) data from a 14-year period found that there were 618 airbag-related injuries in the U.S. Of these injuries, 42% affected the face, 33% affected the upper limbs, and 9.6% affected the chest. The most important finding, however, was that 96% of the injuries were classified as minor.

According to a review of U.S. National Highway Traffic Safety Administration data, the vast majority of airbag injuries (about 96%) are minor. Tweet this

Even if your state allows children to ride in the front seat, the American Academy of Pediatrics (AAP) recommends that all children ages 13 and under buckle up in the back seat. If an adolescent over age 13 is small for their age, it’s recommended that they sit in the back seat as well.

Can I file a lawsuit if I suffered an airbag injury?

If your airbag worked properly and you suffered a minor injury, you generally can’t sue for damages. This is because the airbag likely prevented you from suffering a more serious injury.

There are 3 types of airbag defects that may give rise to liability:

Real Life Example:Adam Bandemer, a Minnesota resident, was a passenger in a 1994 Ford Crown Victoria when the driver of the Ford rear-ended a snowplow. When the passenger-side airbag failed to deploy, Adam suffered a traumatic brain injury.

Adam filed a product liability lawsuit in Minnesota state court. Ford argued that the lawsuit should be dismissed because it was filed in the state where the accident occurred, rather than the state where the vehicle was manufactured. The issue made its way to the United States Supreme Court where the justices ruled against Ford.

The lawsuit is currently pending in Minnesota state court.

What damages can I recover in an airbag injury lawsuit?

In most cases, occupants injured by a defective airbag can recover the following damages:

Enjuris tip:Learn more about the type of damages available in a personal injury case, and find out how lawyers and insurance adjusters estimate the value of a claim.

The Takata Corporation is responsible for the largest auto recall in American history. Since 2013, approximately 67 million Takata airbags have been recalled. The defective airbags have caused at least 18 deaths and more than 180 injuries in the U.S.

As discussed earlier in this article, most airbags inflate when nitrogen gas fills the deflated airbag. However, Takata airbags used ammonium nitrate to inflate the airbags. Ammonium nitrate can break down and become unstable when exposed to moisture. This isn’t necessarily a problem if the ammonium nitrate contains a chemical drying agent.

Unfortunately, the Takata airbags at issue did not contain a chemical drying agent. As a result, unstable ammonium nitrate caused an explosion in some vehicles, which caused the airbags to improperly inflate and sent metal shrapnel hurtling through the vehicles.

Enjuris tip:To see if the airbags in your vehicle have been recalled and to get them fixed:

How do I find an airbag injury lawyer?

If you or a loved one has been injured by an airbag, it’s important to reach out to a product liability lawyer as soon as possible. Most initial consultations are free.

To find a lawyer, we invite you to use Enjuris’ free online directory of personal injury and product liability attorneys near you.