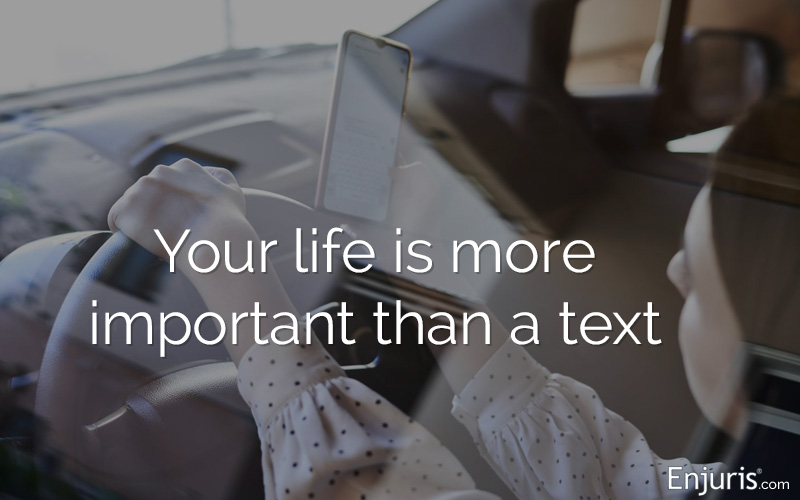 In 1894, Frank Duryea drove the first car in Connecticut.

Frank and his brother Charles built the “Buggyaut” after witnessing the operation of a gasoline engine at the Ohio State Fair.

Although drivers faced distractions in the late nineteenth century, not even the forward-thinking Frank Duryea could have foreseen the number of distractions facing drivers today.

Roughly 9 people are killed every day in the United States in crashes involving a distracted driver, according to the National Highway Traffic Safety Administration (NHTSA).

“There are far too many drivers engaged with cell phones and other electronic devices. It’s wrong and unlawful. No text message is so critical that it’s worth risking lives.”

The amount of drivers manipulating hand-held devices has increased by 127 percent since 2012. What’s more, distracted driving is vastly underreported because it’s difficult to prove unless a police officer sees it or a driver admits to it.

What are the most common types of distractions?

The term “distracted driving” refers to any non-driving activity that diverts a driver’s attention from driving. The most common types of distractions include:

Distracted driving activities fall into 1 or more of the following categories:

Research has shown that distracted driving significantly increases the risk of a car accident. For example, a study published in Proceedings of the National Academy of Sciences found that drivers were 2-6 times more likely to get into a crash when using a cell phone.

One of the reasons car crashes become more likely is that a driver using a cell phone will look but fail to see up to 50% of the information in their driving environment. This phenomenon is called “inattention blindness,” and it occurs when the brain shifts between the task of driving and using a cellphone.

Facing facts:According to the NHTSA, the average interaction with a smartphone takes your eyes off the road for approximately 5 seconds. At 55 miles per hour, that equates to driving the length of an entire football field with your eyes closed!

The applicable distracted driving law in Connecticut depends on the age of the driver:

The state defines a “mobile device” to include:

With respect to Connecticut’s distracted driving law, mobile devices do NOT include audio equipment or any equipment installed in a motor vehicle for the purpose of providing navigation, emergency assistance, or video entertainment to the passengers in the rear seats.

Enjuris tip:If you absolutely need to send a text message or make a phone call, pull over and park your car in a safe location. Once you're safely off the road and parked, it’s legal (and safe) to use your phone.

Connecticut’s distracted driving laws are primary enforcement laws, which means police can pull you over if they see you violating the law, regardless of whether you’re violating any other laws.

Are there any exceptions to Connecticut’s distracted driving laws?

The only exception to Connecticut’s distracted driving laws is when a driver is facing an emergency. Specifically, the use of a hand-held mobile telephone will be permitted in an emergency situation to contact:

How does distracted driving affect liability in a Connecticut car accident?

The fines for distracted driving are relatively minor (although they’re higher than in most other states). The real consequences arise when a distracted driver is involved in a car accident.

Under Connecticut law, a driver is negligent if they fail to use reasonable care and someone is harmed because of that failure.

When a driver causes a car accident because they were distracted (e.g., they were texting and driving or applying makeup while driving), the driver is negligent and responsible for paying the damages caused by the accident.

How does Connecticut’s shared fault rule impact recovery after a distracted driving accident?

Connecticut is a modified comparative fault state, which means the plaintiff can recover damages from the defendant so long as the plaintiff isn’t considered more than 50 percent at fault for the accident.

Connecticut has a fault-based insurance system. This means that the driver who is responsible for causing the accident is also responsible for paying the damages that result.

Here are some additional resources to help you after a Connecticut car accident caused by a distracted driver: