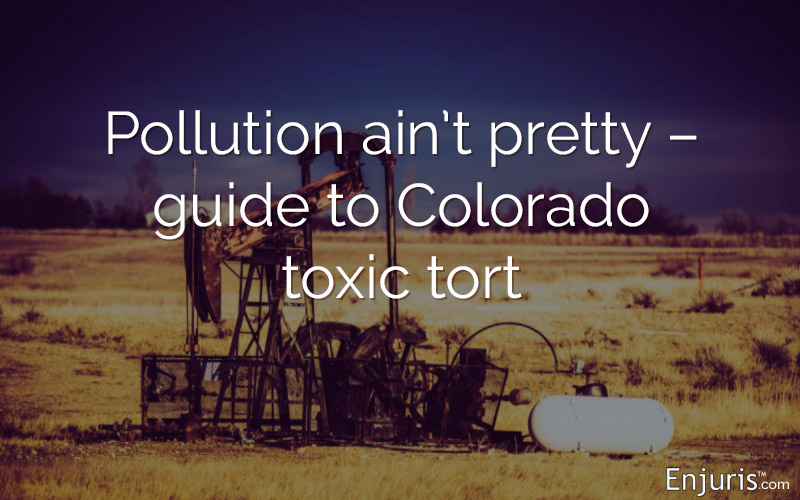 Colorado handles toxic torts in almost the same manner as the rest of the country.

A toxic tort is an injury caused by a pollutant in the earth, air or water that was put there by a negligent defendant.

This defendant might be an individual or a corporation, and it might be more than one defendant if that pollutant was a product like asbestos fibers, benzene or a defective medication.

The difficulty with toxic torts and pollution cases is that it takes quite a long time for injuries to appear. Breathing in noxious fumes on a daily basis might coat your lungs in greasy gas, but it could take 30 years for cancer to develop. As such, proving that the gas you inhaled 30 years ago was the proximate cause of your cancer is a hard connection to make – if you even realize it yourself.

The statute of limitations can also pose significant challenges for plaintiffs. Toxins take many years to rear their ugly hydra heads, and when they do, it is usually decades after the original exposure. Many courts, however, recognize a tolling of the statute of limitations until the plaintiff has discovered the illness so that they have actually have a shot at winning damages.

The different types of pollutants in Colorado

Pollutants can be almost anything. If it can poison the earth around you or harm your body, then it is toxic. These toxins can be found at a work site, at a public park, somebody’s home, or even inside someone’s body – like a knee replacement made of shoddy material, for instance.

Since there are so many different types of pollutants, there are a host of different illnesses that can emerge either immediately or decades later. Plaintiffs can be exposed to injuries from things like:

Colorado has a specific pollutant that many residents have been fighting to eradicate for years now. Fracking, or hydraulic fracturing if you’re fancy, is a drilling technique used for extracting oil and natural gas from underground. It is a hot-button issue because environmental activists claim it pollutes the air, destroys drinking water and adds to greenhouse gases. Fracking also requires an enormous amount of water, which generally needs to be brought in from other areas.

Fracking has been around for decades, but horizontal drilling – now used in tandem – only became widespread in the 1990s. Basically, fracking is a process in which a vertical well turns into a horizontal well approximately two miles underground, and a highly pressurized mixture of water, sand and chemicals is shot into the well to fracture rock, releasing crude oil and natural gas.

The environmentalists’ main concern is the small earthquakes that seem to occur after the pressurized water mixture is shot down into the earth. Additionally, they have been holding out for conclusive scientific studies, like the one from the United States Environmental Protection Agency stating that in some cases, fracking does contaminate drinking water.

Real life example: Roundup lawsuit: A California jury awarded $2 billion in damages to a California couple who developed cancer as a result of using the popular weed-killer Roundup.

Various state residents were disturbed by these environmental changes. The city of Longmont, Colorado completely banned fracking, while Fort Collins enacted a five-year moratorium. The Colorado Oil and Gas Association argued that this interfered with state commerce and sued accordingly.

The Colorado Supreme Court stated that both bans conflicted with state law and were preempted, invalidating them entirely. Even though Longmont and Fort Collins are home-rule cities, which mean that the Colorado Constitution guarantees the right to draft their own charters and regulate local matters without state interference, the Supreme Court noted that these state matters superseded their authority.

Obviously, specific causation can be difficult to prove. The time lapse can make it almost impossible to pin down, and even proving it by a preponderance of the evidence (“more likely than not”) can be insurmountable. Evidence itself also has to meet certain thresholds before it can be admitted.

Plaintiffs have to provide expert testimony, a test for which has been provided by Daubert v. Merrell Dow Pharmaceuticals. The Daubert case set forth rules that state a trial judge has to be the gatekeeper for scientific testimony, asking whether:

Plaintiffs still have trouble meeting this standard. Even with the most esteemed of witnesses, judges often find their testimony to be unreliable given the rocky scientific environment.

However, in Colorado, a case recently came down that gives plaintiffs a glimmer of hope. A 2015 case called Antero Resources Corp. et. al. v. Strudley reaffirmed an appellate court decision holding that “Lone Pine” orders are not permitted by Colorado law. These are case management tools in complex environmental tort cases that require plaintiffs to define their injuries for defendants (which in this context were mainly corporations) and to make an early showing of exposure, injury and causation – even before full discovery has begun.

Translated, this means that plaintiffs had to clearly show their injuries, tie it to the defendants’ conduct, and show exactly how and when they were exposed. This all had to happen before discovery, which is the period of a court case when both sides give each other all information in their possession related to the case.

Enjuris tip: See an overview of the injury claim process in Colorado for more about “discovery” and the various stages.

This was a major blow for defendants and corporations statewide that used Lone Pine orders to weed out their case load – if a plaintiff couldn’t show their injuries early on, they couldn’t proceed with the case. This meant the defendants could save on extensive discovery and not spend hours sifting through thousands of documents.

Now, however, plaintiffs had a way forward.

This is still the case with multiple defendants.

Courts have stated that plaintiffs must offer sufficient evidence to show that their toxic exposure was a “substantial factor” in the development of their disease. If other parties’ actions were the predominant factor in bringing about the harm in question, then the defendant was not a substantial factor and not the legal cause of the plaintiff’s illness.

If Colorado still used Pine Orders, she would have to prove all of that before discovery even began. Now she has time to gather her information and prepare a proper case.

Toxic tort cases are massively complicated. Consider asking an attorney for help determining the elements of general and specific causation – and if you haven’t looked, check out Enjuris’ Colorado partner law firms!