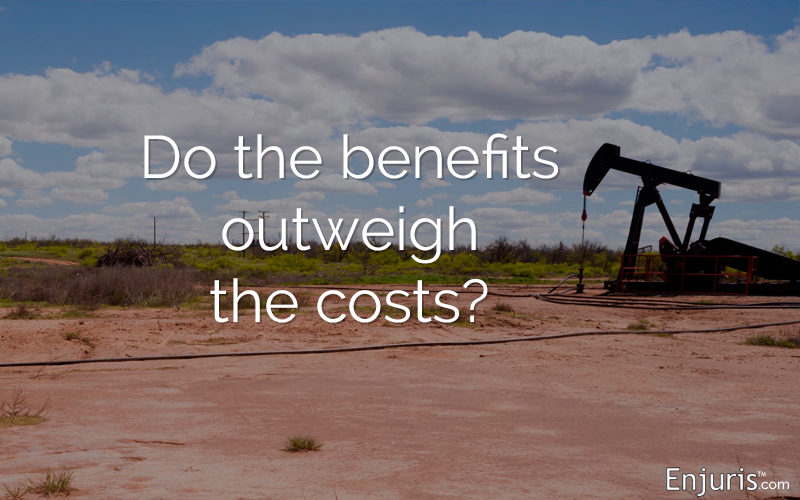 The fracking industry is growing around the country and particularly here in Colorado. While the environmental consequences of fracking continue to be debated, there's no question that fracking presents serious health risks for Colorado workers and the general public.

Hydraulic fracturing (fracking) is a drilling technique used for extracting oil and gas from underground.

Generally speaking, fracking involves drilling a vertical well 1-2 miles under the earth's surface. Once the well reaches the layer of rock where natural gas and oil are stored, it turns 90 degrees and begins drilling through the rock horizontally.

A specialized gun is then lowered into the well and fired, creating a series of small holes.

Finally, the oil and gas, along with flowback water, are pumped back to the surface.

How common is fracking?

According to the United States Department of Energy, there were about 276,000 natural gas wells in the United States in 2000. That number doubled by 2010. Every year there are approximately 13,000 new wells drilled.

Right now, at least 15.3 million Americans have lived within one mile of a fracking well that has been drilled since 2000.

Why is fracking so dangerous?

The health risks associated with fracking are well documented, with more than 700 studies examining the various risks to workers and the general public. Further, many of these risks are serious. In fact, the fracking industry has a fatality rate about 7 times greater than all other industries.

The fracking industry has a fatality rate about 7 times greater than other industries. Tweet this

Below are some of the more common risks associated with fracking.

According to Susan Christopherson of Cornell University's Green Choices, roughly 1,340 trucks deliver water and various chemicals to and from fracking sites. These large trucks travel along rural—often poorly maintained—roads. As a result, trucking accidents are the top danger to workers in this field.

In the past years, as North American oil production increases, so do train explosion accidents.

When exposed to air, hydrocarbons used in fracking become highly combustible. This is dangerous in itself, but it's even more dangerous given the numerous ignition sources on a fracking site. Remember, the process of fracking involves firing a gun into a well!

Other common ignition sources on a fracking site include diesel engines, electrical wiring, and workers who smoke.

Moreover, fracking pipelines blow up far too frequently and often lead to fatalities, including here in Colorado. Workers who repair piping joints are particularly susceptible to the flammable gas hazards. What makes this even worse is that these pipelines often travel through populated communities.

Hundreds of potentially harmful substances are used in fracking, some of which haven’t yet been disclosed by the fracking industry.

Exposure to many of these substances, including benzene and silica, have been linked to numerous health issues. These health issues include reproductive problems, such as an increased risk of having a premature baby, and asthma.

Exposure to harmful substances isn't limited to individuals working on fracking sites. A number of studies, including one conducted by researchers from Colorado School of Public Health, show that air pollution caused by fracking may contribute to health problems for people living near fracking sites. Even the noise from fracking sites has been linked to sleep deprivation, high blood pressure, and cardiovascular disease.

What are the most common injuries?

Workers' compensation claims have quadrupled in the fracking industry since 2007. In addition to the injuries described above, some common injuries associated with fracking include:

Fracking is on the rise here in Colorado and that means the chances of sustaining a fracking-related injury are on the rise. If you believe you've suffered an injury related to fracking, I'm ready to stand with you. As an attorney experienced in the areas of personal injury and workers' compensation law, I offer free consultations to clients like you. Contact me today if you need help.

When you're up against a corporation or insurance company with a workers' compensation claim, insurance dispute or personal injury matter, you can be confident in the Colorado attorney representing you at the Babcock Law Firm. We're well versed in the tactics big companies use to try to prevent you from receiving the settlement or benefits you deserve, and we are fully committed to helping people just like you fight and win cases. View our profile and visit our website today.