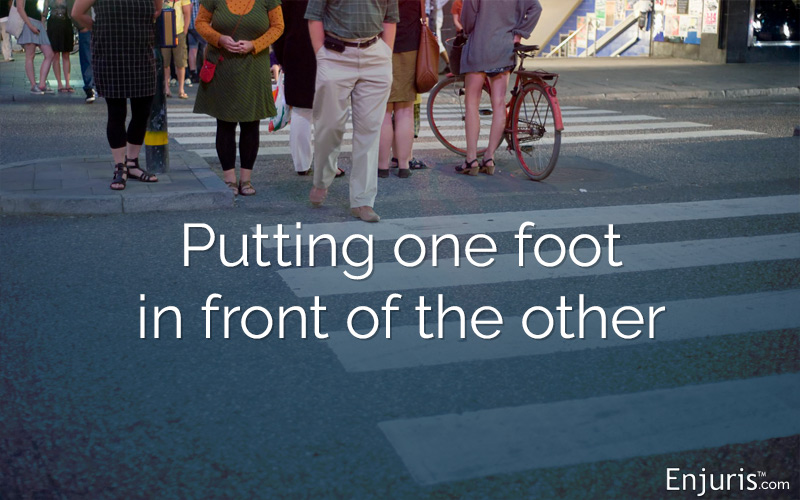 Do you know your rights and responsibilities as a pedestrian in California? A collision could be the fault of a driver or a pedestrian. See why and when there’s liability.

Walking can be a great form of exercise, and lots of people also walk for leisure or as environmentally friendly transportation. Walking is also statistically much safer than driving a car—not to mention less stressful since you don’t have to worry about getting stuck in traffic.

But being a pedestrian isn’t without its dangers.

Especially in California, where the climate in many parts of the state lends itself to year-round outdoor pursuits, pedestrian accidents are a problem.

Like any other kind of roadway accident, sometimes the motorist is at fault and sometimes it’s the pedestrian who made a mistake.

What is a pedestrian?

A pedestrian is considered any person who is walking, on roller skates, a skateboard, hoverboard, or other moving object, in a wheelchair or using a tricycle or other similar device that’s not a standard bicycle.

According to data from the California Department of Public Health, as the number of pedestrians continues to increase across the state, so do the number of crash fatalities.

When you’re riding in a car, either as the driver or a passenger, you have layers of protection including seat belts, airbags, and the car itself. Every vehicle on the road is crash-tested and must meet rigorous safety standards.

As you might guess, a pedestrian is always at a disadvantage in a collision with a motor vehicle. The pedestrian is unprotected and fully exposed to impact.

California has pedestrian right-of-way laws, but like any laws, they only save lives if people follow them.

This does not mean that pedestrians always have the right of way. In fact, pedestrians aren’t allowed to walk into the street without a crosswalk. The pedestrian must yield to vehicle traffic on the road anywhere that’s not a marked or unmarked intersection crosswalk.

In other words, not every intersection has a marked crosswalk. If it’s not marked, there’s still a presumed crosswalk, and the driver is expected to yield to a pedestrian who wishes to cross the street.

Enjuris tip:California has a “Basic Speed Law,” which means a driver is only allowed to drive at a speed that’s safe for the current conditions, regardless of the posted speed limit. The California Driver Handbook specifies that the presence of bicyclists or pedestrians is a factor that should reduce speed.

Who is liable in a California pedestrian accident?

A pedestrian can be injured by a car, bicyclist, motorized scooter or another pedestrian.

Ultimately, the standard for liability and negligence in an accident involving a pedestrian and a vehicle is the same as any other personal injury.

The injured pedestrian needs to prove 3 elements to recover in a personal injury lawsuit:

Every person owes a duty to other people around them. Every driver on the road has a duty to be aware of other vehicles, bicyclists, and pedestrians. In other words, a driver has a responsibility or obligation to be careful, aware, and generally safe on the road.

There are lots of ways a driver can be negligent, but here are just a few examples:

The speed limit is 25 miles per hour within 500-1,000 feet of a school when children are outside or crossing the street. The 25 mph limit also applies if there are children on school grounds that aren’t fenced in (even if they’re not entering the street).

A driver near a school is required to look for the school crossing guard or safety patrol and follow their directions.

Be aware of school buses. If the yellow lights are flashing, it means the bus is preparing to stop — and drivers of cars must prepare to stop, too.

When a school bus flashes its red lights, a driver from either direction is required to stop and wait for children to safely cross the street and for the bus driver to turn off the red flashing lights. Failure to stop for a school bus’ flashing red lights is punishable by a fine of up to $1,000 and a loss of driving privileges for 1 year.

When is the pedestrian at fault?

This can be tricky.

The driver’s insurance company is likely going to try to claim that the pedestrian was at fault — and maybe they were. But California is a comparative fault state, which means that liability can be split between all the involved parties.

In a comparative fault state, the court determines each party’s percentage of fault. If the plaintiff (the injured person) was 20% at fault, for example, their damages would be reduced by 20%.

Here’s an example of how this might play out:

Pedestrian Peter is jogging down the street during his lunch hour. He’s properly on the sidewalk, and the street isn’t terribly busy.

Peter’s phone buzzes. He continues to jog, but pulls his phone from his back pocket and begins to read and respond to a text message. As he texts, his jogging becomes erratic and he loses focus as he begins to cross an intersection without checking to see if the light is red or green.

Peter begins to jog across the street, even though the light facing him is red.

Motorist Mary is approaching on the cross-street to Peter’s left. She has a green light and is traveling at the posted speed limit of 35 mph. She sees Peter — too late — and screeches to a stop, but not before grazing him enough to cause an injury to his back and leg.

Who is liable for Peter’s injuries in this scenario?

Mary has an obligation under California law to stop for a pedestrian in the crosswalk of an intersection. But Peter was distracted by his phone and wasn’t exercising due care — he crossed against the light.

Both Mary’s and Peter’s lawyers could make a case that the other person was partially at fault.

If Peter tries to recover damages for his back and leg injuries, it’s likely that the court would assign some liability to him. So if his medical treatment and related expenses came to $10,000 and the court determined that he was 50% at fault, he could only recover $5,000 in damages.

Usually, pedestrian accidents happen because of cars, bicycles, or other transportation issues.

But sometimes people get hurt simply by walking... because they tripped.

If you fell or were injured because of a broken sidewalk, icy or otherwise slippery surface, or some other hazardous condition, your case might fall under California premises liability law.

California requires that anyone who owns or occupies property keeps it in reasonably safe condition. Just like when you’re trying to prove negligence from a vehicle-pedestrian accident, the elements for a trip-and-fall are similar:

If you fell on private property, you’d need to find out who is the owner and who was responsible for maintenance.

The first step after any accident or injury is always to obtain the medical care you need. If you’re unable to walk or move any part of your body, if you bumped your head, or if you’re dizzy or unsteady, call 911.

Just like in a car accident, you might think you’re unharmed right after the injury happens. But that doesn’t mean symptoms won’t appear later or in the days or weeks ahead. Even if you don’t think you need to call 911 or require emergency medical services, you should still visit your doctor or an urgent care facility to be evaluated and have your physical condition documented.

Likewise, if you’re a witness to a pedestrian accident, make sure that any injured person is receiving the care they need before you leave the scene. If they’re unable to make phone calls on their own, be a good Samaritan and help where needed.

It’s also possible that the driver of the car that hit a pedestrian could be injured. Even though the pedestrian will likely be in far worse shape, the driver will have experienced impact and might require medical attention, too.

If you’ve been in a pedestrian accident and you’re not seriously hurt, try to gather the following information:

Even if you think your injuries are minor (or nonexistent), it’s important to get a police report at the scene of any accident involving a motor vehicle. This can go a long way toward preserving your legal rights if you end up needing to file a claim either against the insurance company or as a lawsuit.

Enjuris tip: Almost everyone has a phone that takes pictures these days. Even if you don’t think you have severe physical injuries after an accident, chances are you’re pretty shaken up and maybe not thinking straight.

Don’t bother trying to hand-write the driver’s license data, insurance information, or license plate number. Instead, take photos. That way, you’ll know the information is accurate and you know you have everything you need.

The only information that won’t show up in a picture would be the driver’s phone number and email address, so you’ll want to collect those separately.

How the insurance company handles a pedestrian accident

The driver should report any collision to their insurance company. If a pedestrian was injured, they’re required to file a report, too. California requires every driver to carry at least $15,000 in injury insurance and $5,000 for property damage.

The importance of having a medical examination after being hit by a car cannot be overstated. If you don’t seek medical attention, the insurance company will assume that you weren’t injured.

Damages are awarded to compensate an injured person for the costs they had to pay related to the injury. Therefore, if your injury didn’t require any medical treatment, and if there was no property damage, then you don’t have a claim for damages because you didn’t have any expenses.

If you do suffer an injury that requires treatment, you’ll make a claim against the driver’s insurance company if your own health insurance doesn’t cover your bills.

Your health insurance might cover your actual treatment, but it won’t cover things like wage loss from time out of work. It also won’t cover emotional distress or other non-economic damages.

Once the driver has filed a report of the collision with their insurance company, it’s possible that an insurance adjuster will call you to “see how you’re doing” or “get your version of events.” Be wary that these are not the real reasons why they’re calling.

They’re calling because they want you to accidentally say something that makes the driver seem less liable. There are tactics that insurance companies use to elicit certain responses that minimize their liability, which allows them to offer a lesser amount as a settlement.

You’re never required to talk to the driver’s insurance company. You can choose not to take the calls, or you can tell them to speak directly with your lawyer.

When to call a personal injury lawyer for your pedestrian accident

It’s never too soon to find a personal injury lawyer after an accident. Especially if your injuries are severe, you might be out of work or require ongoing therapies or treatments, and you want to be sure that your costs will be covered.

The Enjuris Personal Injury Law Firm Directory offers a list of qualified California lawyers who are ready to help.