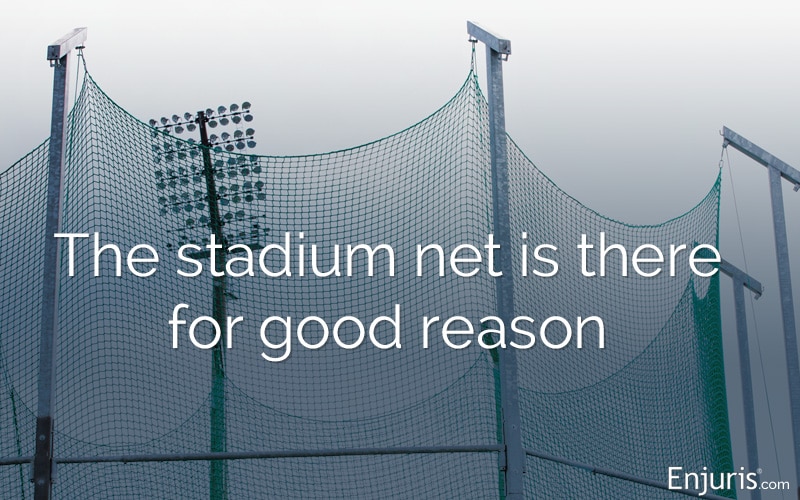 Take me out to the ballgame.

A fun day out left one Montgomery County, Texas woman with an injury for which she sued the Houston Astros for $1 million and settled for undisclosed damages.

Jennifer Harughty was seated in the third base stands halfway up the first deck at an Astros-White Sox game in July 2018. The team’s mascot, Orbit, launched a t-shirt into the crowd. The shirt hit Jennifer’s hand and fractured her finger. She assumed her finger was jammed because it was a t-shirt… she didn’t think it could do very much damage.

But as the game continued, Jennifer became more and more uncomfortable as the pain in her hand grew more intense. When the game was over, she headed to the emergency department for treatment.

The hospital staff diagnosed her with a severe fracture that would require surgery for reconstruction. She had the surgery 4 days later, and 2 screws were placed in her finger. She had months of physical therapy but continued to suffer pain, swelling, and loss of motion. Jennifer had a second surgery 3 months later to increase the likelihood that she could regain use of her finger.

Jennifer sued the Astros for damages related to her injury.

Jennifer said her medical bills amounted to more than $15,000 but she requested $1 million in damages to compensate her for mental anguish, loss of opportunity, and loss of enjoyment of life. (source)

Jennifer is not the first to sue a sports team for an accident that happened while spectating at a game. In 2015, John Coomer sued the Kansas City Royals, claiming that a foil-wrapped hot dog thrown by Royals mascot Sluggerrr caused him to suffer a detached retina and permanent eye damage.

Table of Contents + show
The Baseball Rule
Premises liability lawsuits at sporting events
What should you do if you were injured at a sporting event?

A baseball team or its management cannot be held liable for a spectator’s injuries from a foul ball batted into the stands under most circumstances. The team or facility owner must provide some protected seating in areas where foul balls are most likely to land, but its liability is otherwise limited. This principle also applies to other circumstances, like if a player tosses a ball into the stands as a souvenir. It also applies to other sports like hockey and golf.

Another aspect of the Baseball Rule is the plaintiff’s assumption of the risk. A defendant can argue that the injured person was aware that the activity or event had certain risks, and they chose to participate even though the dangers were common knowledge.

In the case of Coomer v. Kansas City Royals, the court ultimately determined that the Kansas City Royals were not liable for John Coomer’s eye injury under the Baseball Rule and he was not able to recover damages in his lawsuit.

Although Jennifer’s injury was caused by a t-shirt and not a baseball, it’s possible that the court will find it falls under the Baseball Rule because of the nature of the activity and her presumed assumption of the risk if she was attempting to catch the shirt. Various states’ courts interpret the Baseball Rule differently.

In another lawsuit very similar to Jennifer’s, Alex Swanson sued the New York Mets after he was injured by a t-shirt cannon. Alex said the cannon shot the t-shirt into his face, and he temporarily lost consciousness and suffered a detached retina and permanent damage to his vision.

Jennifer Harughty reached a confidential settlement in October 2020 with the Houston Astros for her finger injury.

Some lawsuits are fairly straightforward. For instance, if you’re injured in a car accident and can’t get enough insurance to cover your injuries, a lawsuit could be the way to get compensation. Generally, there are 2 questions the court would decide:

But a lawsuit involving a spectator injury at a sporting event can be much more complicated and less straightforward. The outcome will largely depend on the specific circumstances of the injury.

Injuries like Jennifer’s typically fall under the category of premises liability law. This type of law deals with injuries that happen as a result of a hazardous condition involving property. The property owner or manager is liable for an injury that happens because property was negligently maintained or if they should have warned of a dangerous condition.

Some injuries that happen at a sports arena or stadium are slip-and-falls or otherwise related to liquids spilled on the floor, broken or cracked steps or sidewalks, or similar types of incidents. In those cases, a victim would need to prove that the accident was foreseeable, or that a reasonable person would have anticipated that an injury could happen because of the hazard.

However, if there’s a property condition that can’t be remedied — for instance, a slushie machine leaks icy juice all over a cement floor and the staff doesn’t have time to clean it immediately — the property manager would be responsible for making an effort to warn of a dangerous condition. They might put up cones or warning signs, for example, alerting visitors that the area could be slippery and patrons should avoid walking there or be careful.

But injuries from foul balls, airborne hockey pucks, or items purposely thrown or launched into the stands are different.

Whether or not a plaintiff can recover from this type of injury depends on how it happened and the scope of a liability disclaimer that the victim agreed to by purchasing the ticket.

If you read the very, very tiny print on a ticket, it usually includes a general release of liability so that if a spectator is injured during the event, they can’t hold the team or stadium liable for their damages.

Although you assume the risk inherent in being a spectator and the possibility of incidents like a foul ball pop-up, you don’t assume the risk that the manager has failed to properly maintain the facility. In other words, they can’t disclaim liability for their own negligence.

The management is still responsible for having certain safeguards, like proper netting in areas where balls could fly, security, and plans for crowd control or handling intoxicated fans.

Why is there netting that protects the stands in some areas but not others?

Why isn’t there a giant net over the playing field so a spectator would never be injured by a ball that goes into the stands?

For the most part, the stands are safe and the team wants fans to have an unobstructed view of the field. However, the areas behind home plate are protected because a ball that fouls straight back could be moving fast and the spectators could be seated too close to get out of the way quickly.

By contrast, a home run ball or pop fly could reach the stands in the outfield. But by the time it gets there, the spectators have had 4 or 5 seconds to protect themselves by getting out of the way and they are less likely to be hit.

What is the stadium’s responsibility for fans’ safety?

The stadium management is responsible for keeping the premises reasonably safe for patrons. This includes:

What should you do if you were injured at a sporting event?

First and foremost, you should seek emergency medical care. Next, you should contact a personal injury lawyer who can advise you as to whether your injury is something that could be the result of liability on the part of the stadium or facility.

Particularly if your injury is severe or likely to result in long-term medical treatment or pain, you could be entitled to compensation. If the injury was caused by negligence, it should not be your financial expense to bear.

If you need to contact a personal injury attorney near you, you can use the Enjuris Law Firm Directory to find an experienced, compassionate, and skilled lawyer who can help with your claim.