Accident Help (Home) » Injury Blog » Can I File a Lawsuit for Getting Hurt at a Sporting Event? 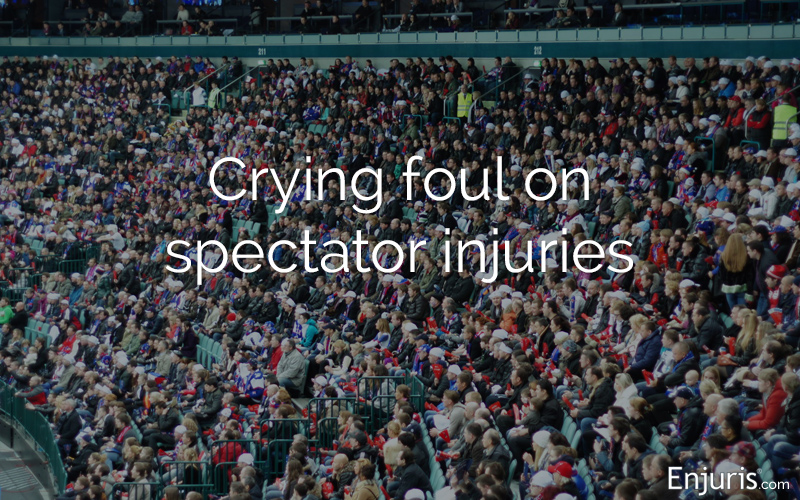 Even though it isn’t something you typically hear about on ESPN, professional team owners and operators of sports stadiums are routinely sued by fans for injuries sustained while attending sporting events.

Spectator lawsuits tend to fall into 1 of 2 categories:

In this blog post, we’ll focus on struck-by-object lawsuits by looking at a recent North Carolina Court of Appeals decision to dismiss a lawsuit filed by a spectator who was hit by a foul ball at a Durham Bulls minor league baseball game.

What are owners and operators of sports stadiums required to do to protect spectators?

Table of Contents + show
What are owners and operators of sports stadiums required to do to protect spectators?
Mills v. Durham Bulls Baseball Club lawsuit
What is the Baseball Rule?
Assumption of the risk
Can I recover damages after being hit by a foul ball?

This legal obligation is why hockey teams put up glass around the rink and why baseball teams put up netting behind home plate (where the risk of being hit by a foul ball is higher due to the proximity of home plate).

But what happens if you’re hit by a baseball in a section of the stadium where there’s no netting?

This was the main question raised in a lawsuit filed by one North Carolina family against the Durham Bulls Baseball Club.

Eleven-year-old Angelina DeBlasio was sitting on a picnic bench at a Durham Bulls minor league baseball game when a foul ball flew over the left-field wall and struck her in the face. Angelina was rushed to Duke University Medical Center’s Emergency Department where she underwent endodontic and orthodontic surgeries.

Angelina’s parents sued the Durham Bulls for negligence. The lawsuit argued that Angelina wasn’t old enough to understand the risks of attending a baseball game and that the Durham Bulls didn’t take enough precautions to protect spectators from foul balls.

Angelina’s lawsuit was dismissed on December 31, 2020.

“Though the plaintiff undoubtedly suffered a painful and unfortunate injury,” wrote Chief Judge Linda McGee in her opinion dismissing the case, “we hold that the Baseball Rule is applicable.”

What is the Baseball Rule?

The baseball rule is a 100-year-old law that shields baseball teams from liability if they provide at least some screened seats for fans who may desire them.

The “baseball rule” shields #baseball teams from liability of spectator injuries due to foul balls if they provide at least some screened seats for fans who may desire them.  Tweet this

The reasoning behind the law is that it’s considered common knowledge that baseballs are likely to be thrown or batted outside the lines of the diamond during a baseball game. As a result, due care does not require ALL of the spectators to be screened in. Rather, teams need only provide screened seats for those fans who want them.

The baseball rule is state-specific in that the specific number of screened seats required in order to be shielded from liability varies from state to state, as do the exceptions. What’s more, not all states have adopted the law (although the majority of states have).

Assumption of the risk

In addition to the baseball rule described above, owners and operators of baseball stadiums commonly raise the defense of “assumption of the risk.”

Assumption of the risk is a legal doctrine that shields an owner or operator from liability when the injured person implicitly assumes the risk of getting injured by participating in an activity that the person knows could be hazardous.

“Anyone familiar with the game of baseball knows that balls are frequently fouled into the stands and bleachers. Such are common incidents of the game which necessarily involve dangers to spectators.”

A person can also explicitly assume the risk of getting injured by signing a liability waiver or checking a box when they purchase a ticket to a game.

Can I recover damages after being hit by a foul ball?

Despite the significant challenges outlined above, spectators in some states have been able to recover damages. For example, the Atlanta Braves recently reached a settlement with the family of a 6-year-old girl struck by a foul ball, and a man who lost his eye when he was struck by a foul ball at an Iowa State baseball game recovered damages.

That said, these cases are often challenging and require the expertise of a knowledgeable attorney. And whether or not you can recover damages depends in large part on the state in which the accident occurred.

If you were injured at a sporting event, we invite you to use our free online directory to talk to an attorney about your case today.

Were you or someone you know hurt at a sporting event?