Accident Help (Home) » Injury Blog » Do You Know What To Do After a South Carolina Hit-and-Run Accident?

Pedestrians, drivers, passengers and even bicyclists can have their entire world turned upside down when a negligent driver causes an accident.

Stopping, exchanging information and ensuring no one is severely injured is the responsible thing to do. Unfortunately, some people choose to flee the scene of an accident. This leaves victims with no one to hold responsible for their medical bills, lost wages and emotional suffering.

The main goal of a South Carolina car accident lawyer is to take on all aspects of a hit-and-run case so victims can focus on healing properly.

The more knowledge a driver has about hit-and-run accidents, the better their chances of obtaining full compensation for any damages that occur during the accident.

In South Carolina, the main hit-and-run law is as follows:

“The driver of any vehicle involved in an accident resulting in injury or death of any person or damage to any vehicle which is driven or attended by any person shall give his name, address, and the registration number of the vehicle he is driving and shall upon request and if available exhibit his driver’s license to the person struck of the driver or occupant of or person attending any vehicle collided with and shall render to any person injured in such accident reasonable assistance, including the carrying or making arrangements for the carrying of such person to a physician, surgeon, or hospital for medical or surgical treatment if it is apparent that such treatment is necessary or if such carrying is requested by the injured person.”

Essentially, it’s the duty of all drivers involved in a hit-and-run accident to stop, exchange information and assist any injured persons. If a driver fails to do so, it’s considered a hit-and-run accident. The same laws apply when a pedestrian is struck by a driver. Even if the vehicle is unattended, the state of South Carolina requires drivers to stop and inform the vehicle’s owner verbally or through a written note.

When involved in a hit-and-run in South Carolina, it’s extremely important to notify the police right away so the scene is documented and any evidence is collected. Evidence retrieved at the scene will be documented in the police report. Insurance companies are notorious for trying to place at least part of the blame on the victims of hit-and-run accidents in order to lower the amount of compensation they receive. A police report may prevent the insurance companies from doing so.

In the event a driver is involved in a hit-and-run accident, they should try and collect as much information as possible, including:

Even if the victim doesn’t have any visible injuries, they should seek medical attention immediately.

Another reason why hit-and-run accident victims should seek medical attention is to prove to insurance companies that the injuries were sustained in the accident. Any and all injuries will be documented by a medical professional. Having a medical record of each injury will be very important to prove that the injuries are legitimate and significant when requesting compensation in court or from an insurance company. When the victim also records their symptoms on their own, they will essentially have a paper trail to prove any pain and suffering.

An experienced South Carolina car accident lawyer will be able to collect all of this evidence and present it in a way that will support the victim’s case.

The types of injuries that can be sustained in a hit-and-run car accident include:

Free printable medication sheet for documenting details after you accident 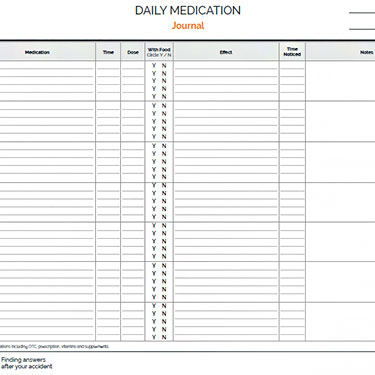 Any time you are prescribed medication, you will want to keep track of side effects. Especially if you are considering a personal injury lawsuit, it is crucial to document every effect on your life.

The owner of a parked car that is struck by a hit-and-run driver typically doesn’t witness the collision. As a consequence, hit-and-run accidents are handled a little differently when they involve parked cars.

If your parked car is hit by someone else, you should still contact the police to document the incident and collect all of the evidence you can. However, it will be almost impossible for anyone to identify the driver without the hit-and-run driver’s vehicle information, an eyewitness or video footage. For this reason, it’s important that you look for witnesses and request video footage from the surrounding businesses.

Penalties for a hit-and-run offense in South Carolina

A violation of South Carolina’s hit-and-run statute carries potentially hefty penalties. The severity of the penalty depends on the seriousness of the injuries sustained by the victim.

Finally, when a hit-and-run accident results in wrongful death, the offense is a felony and carries penalties such as:

If you’ve been injured in a hit-and-run accident in South Carolina, it’s important to speak with an experienced South Carolina car accident attorney as soon as possible. Initial consultations are FREE at The Lovely Law Firm.

Justin M. Lovely is an experienced personal injury attorney who has been repeatedly recognized as one of the best in his field. Justin is admitted to practice in all South Carolina Courts and the U.S. District Court for the District of South Carolina. You may have observed Justin answering legal questions on MTV’s Teen Mom II, WRNN in Myrtle Beach, or the Carolina Justice Report podcast (where he is the co-host). You can learn more about Justin by visiting The Lovely Law Firm website or by visiting his Enjuris page.

Chappell Smith Arden
You've got a friend in the fight
Serving Columbia and the state of South Carolina
(803) 929-3600 Free consult
Specialty: Personal injury and workers' compensation