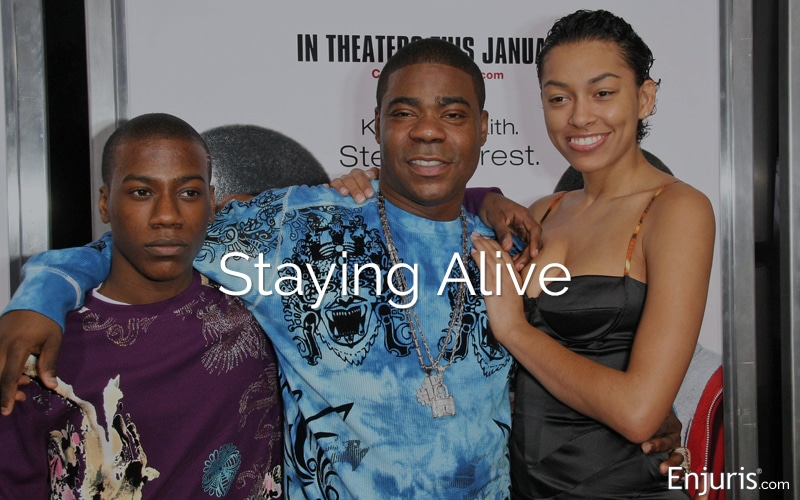 Serious car accidents can have a long-term impact on not only your physical health, but also your mental and emotional well-being. One of the most infamous examples of the emotional toll a car crash can take is the tragic 2014 car accident involving comedian Tracy Morgan.

Let’s look back at the accident, the subsequent lawsuit, and the emotional impact the accident continues to have on Tracy Morgan’s life almost 7 years later.

On the morning of June 7, 2014, Tracy Morgan was a passenger in a Mercedes Sprinter minibus that was headed to New York City after leaving a stand-up comedy show in Delaware.

While traveling northbound on the New Jersey Turnpike, the minibus was struck from behind by a Walmart tractor-trailer. The impact overturned the minibus and caused a pile-up that involved 6 other vehicles.

"I just remember the impact,” said the driver of the minibus Tyrone Gale. “We didn't know which way was up, which way was down. I don't know if we flipped several times or one time. I saw the condition of everybody and I knew it would just make it worse if I tried to pull them up and out of the vehicle."

When emergency workers arrived at the scene, Tracy was critically injured. Another passenger on the minibus, comedian James McNair (known as “Jimmy Mack”), was pronounced dead and 3 other passengers were injured.

Tracy was flown by helicopter to Robert Wood Johnson University Hospital where he remained in a coma for 8 days. He underwent surgery, followed by months of physical rehabilitation and cognitive therapy to address a traumatic brain injury, broken leg, broken femur, broken nose, and several broken ribs.

A subsequent investigation found that the driver of the Walmart tractor-trailer, Kevin Roper, was driving 65 mph in a construction zone with a posted 45 mph limit and failed to brake in time for traffic that had slowed in front of him as a result of the construction.

After the crash, Walmart began requiring drivers to live within 250 miles of the place they report to work, or to be at that starting point at least 9 hours before their shift begins, according to the National Transportation Safety Board.

Walmart also developed a “fatigue management program” to educate drivers, dispatchers, managers, and their families about the need to report to duty refreshed.

On July 10, 2014, Tracy Morgan, along with the 2 others who were injured in the crash, filed a personal injury lawsuit against Walmart in the U.S. District Court in New Jersey.

The lawsuit alleged that Walmart should have known that Kevin Roper had been awake for 12 straight hours when he started his 14-hour shift (in violation of the Federal Motor Carrier Safety Administration Regulations, which were enacted largely to combat the dangers of driver fatigue).

The lawsuit also alleged that Kevin fell asleep at the wheel as a result of his fatigue.

“Walmart knew or should have known that it was unreasonable for Mr. Roper to commute more than 700 miles from his home in Jonesboro, Georgia to work at a Walmart facility in Smyrna, Delaware, especially immediately before he was to commence a long shift operating a truck that weighed approximately 30-40 tons.”

Walmart did not contest liability and the case was settled on May 27, 2015 for a confidential amount.

The accident took a tremendous physical toll on Tracy, but it was the emotional toll of the accident that nearly ended his life.

“I was in a very dark place,” said Tracy about the time after the accident. “I was sitting [in bed] contemplating suicide.”

Years after the accident, Tracy still has good days and bad days—much of which he details in his 2017 stand-up special Staying Alive. He credits his wife and children with getting him through each day.