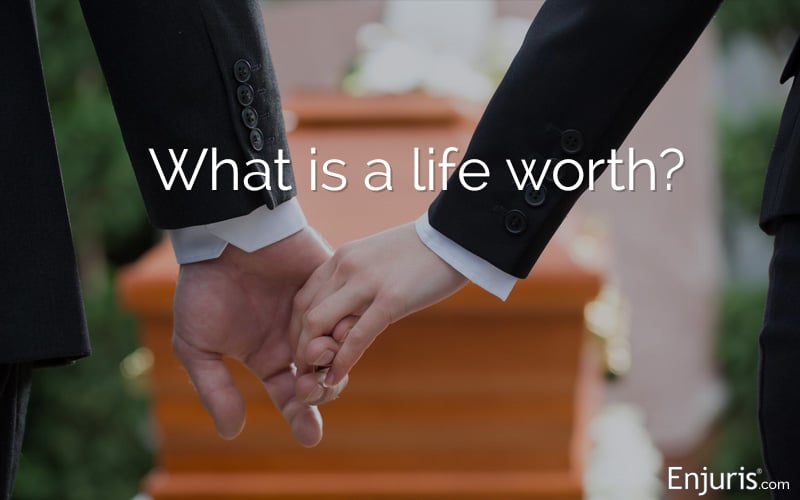 When a loved one dies as a result of someone else’s negligence or wrongful act, certain members of the deceased’s family may be able to recover damages by filing a wrongful death lawsuit.

In most states, eligible family members can recover:

Of course, it’s impossible to place a value on the life and loss of a loved one, which is one reason wrongful death verdicts and settlements fluctuate so wildly.

To give you an idea of what a “large” wrongful death award looks like, we’ve compiled 10 of the largest wrongful death verdicts and settlements in recent history.

Enjuris tip:Keep in mind that many settlements are confidential, so this list includes only public settlements.

Tyler’s family filed a wrongful death lawsuit against Joshua, along with Peru State College. The court dismissed the college from the lawsuit, ruling that college officials couldn’t have foreseen that Joshua would commit violence against a fellow student.

The lawsuit proceeded against Joshua and, after a 1-day trial, Nemaha County awarded Tyler’s family $2.6 billion. Of the total, $2.4 billion was in punitive damages. Under Nebraska law, punitive damages must be paid to the local school district.

The jury awarded $295 million in punitive damages to Shayna Monson, who survived the crash but suffered a traumatic brain injury, and to the families of 22-year-old Abby Rentschler and 21-year-old Taylor Goven, both of whom died in the crash.

The jury also awarded compensatory damages totaling $170 million to Shayna and $36 million to each of the families of the 2 women who died.

In the separate criminal proceeding, Jason was sentenced to 25 years in prison.

Aaron Doty was attacked by Jonathan Rodriguez and Kenneth Felipe at a house party in Sebring, Florida on June 11, 2012. After knocking Aaron unconscious, the 2 men dragged his body into the woods, doused him in gasoline, and set him on fire.

Jonathan and Kenneth were sentenced to life in prison. Afterward, Aaron’s family filed a wrongful death lawsuit against the men and were awarded $700 million ($300 million for compensatory damages and $400 million for punitive damages).

Unfortunately, as is often the case with wrongful death lawsuits brought against private individuals, the family is unlikely to recover much if any of the $700 million.

“There wasn’t going to be any money, that wasn’t something we were concerned with," said Blair Doty. "We wanted to drive a message home.”

In an attempt to kill her children and herself, Kristina Gaime drugged her children, placed them in her running GMC minivan, and ran a hose from the tailpipe through the car window.

Kristina and her oldest child survived, but, tragically, her youngest child died.

A wrongful death lawsuit was filed in Hillsborough County by the surviving son and his father. Ultimately, a jury ordered Kristina to pay $500 million.

Twenty-year-old Kalil McCoy was a passenger in an SUV driven by Frederick Lee Wade. The 2 got into an argument over whether or not Kalil could open a window in the car. The fight ended with Frederick shooting and killing Kalil. Frederick, with the help of 2 other passengers, Kennard Mahone and Jonathan Brooks, disposed of Kalil’s body in the woods.

Kalil’s family filed a wrongful death lawsuit against the men and were awarded $250 million from Frederick, who is also responsible for paying funeral costs. Kennard and Jonathan were also ordered to pay $125 million and $110 million respectively.

The families of the 3 patients filed a wrongful death lawsuit against DaVita.

On June 27, 2018, a Colorado jury awarded $383.5 million to the families of the patients. The jury concluded that DaVita concealed facts from the patients regarding GranuFlo, a product that the company knew could cause toxic pH imbalances. High pH levels are linked with an increased risk of stroke or heart attack.

On July 18, 2016, Judy Madere, Trudy Herbert, Carrie Jones, and Jones’ 2 children—7-year-old Trinity and 4-year-old Jackson—were killed in a car crash with a tractor-trailer on U.S. Highway 80 at Jowers Road.

A subsequent investigation found that the tractor-trailer crossed the center line and hit the SUV without executing any evasive maneuvers, suggesting that the driver may have fallen asleep.

Judy Madere’s family filed a wrongful death lawsuit in 2019 and was awarded $280 million, including $100 million for punitive damages and $65,000 for attorneys’ fees.

Riley McPherson, a 21-year-old from Big Sandy, was killed when the vehicle he was driving struck an 18-wheeler that was parked in the main lane of traffic on Highway 271.

According to the driver of the 18-wheeler, 26-year-old Eric Jefferson, he was attempting to back the vehicle into a private residence. A subsequent investigation revealed that Eric had been driving the 18-wheeler for 17 hours straight, which violated state and federal laws.

On November 9, 2018, an Upshur County jury awarded $260 million to the family of Riley McPherson after determining that Jefferson Trucking and Eric Jefferson were responsible for the accident.

On June 5, 2013, a building that was undergoing demolition collapsed. The collapse, which occurred on the southeast corner of 22nd and Market Street in Philadelphia, caused the death of 6 people and injured 14 others.

The lawsuit alleged, among other things, that the demolition contractor violated several safety regulations, the crane operator was intoxicated at different times during the demolition, and the city building inspector failed to adequately inspect the project.

Ultimately, a $227 million settlement was reached between the plaintiffs and defendants.

A jury awarded more than $150 million in damages to a 13-year-old girl who watched her family burn to death in a fiery crash on a Southern California freeway.

Kylie Asam, 9 years old, and her brother Blaine, 11 years old, were in an SUV that crashed into an 18-wheeler parked on the shoulder of Interstate 210 with its lights off. Although Kylie and her brother managed to escape the burning SUV, they were unable to free their parents. Blaine later committed suicide.

A jury deliberated for 3 days before finding the driver of the 18-wheeler, Rudolph Ortiz, negligent for parking on the side of the freeway in the early morning darkness without any lights or an emergency reflector.

No amount of money can replace the loss of a loved one. However, the spouses and families of these cases listed above were able to get some sense of closure through these rulings and at least get some financial compensation to pay for such things as funeral and burial expenses, medical bills and loss of consortium.

If your loved one was killed as a result of someone else’s negligence or wrongful act, you may be able to recover damages by filing a wrongful death lawsuit. Browse Enjuris to get help finding the right wrongful death attorney to handle your case.