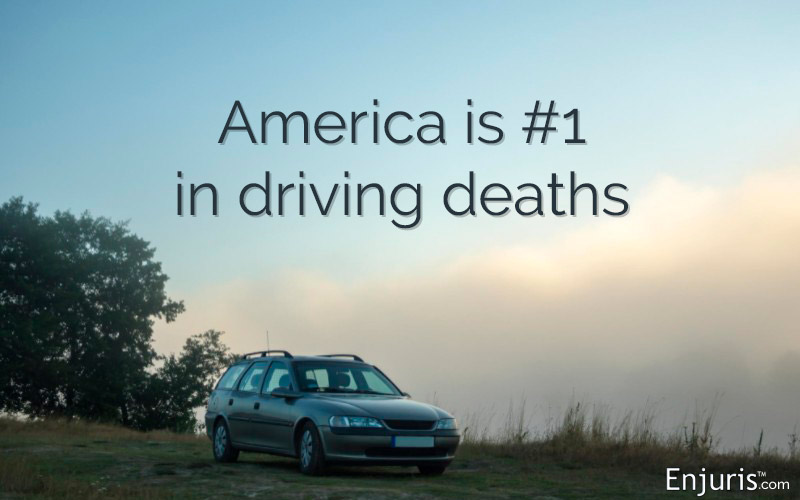 We like to think that America is #1 in everything, but that is no longer the case – or it technically is, but it isn’t a good thing in this instance. Other countries have made great strides in reducing their number of driving deaths. The United States, on the other hand? We haven’t. Our roads have become far less safe over the past few decades, and we are now the country with the most hazardous roads in the industrialized world.

Why is this? Well, countries like Australia and Canada invested resources in evidence-based campaigns to reduce their number of car crashes. We didn’t.

Looking at the numbers

According to the New York Times, more people die from car accidents in America than from gun violence. If we invested more resources, like other countries have, that number could go down by at least 10,000 individuals per year. That’s 30 people saved per day. As of 2015, the trend for driving deaths started to increase again – a 14% increase from 2013. 2016 was the deadliest year on record in almost a decade.

This doesn’t even get into the medical costs for people who survive. Americans lost an estimated $432 billion in wages, medical bills, time away from work, and property damage, according to StreetsBlog USA.

Factors like speed, alcohol and seatbelt use (one in seven Americans still refuses to use seatbelts, for some unknown reason) are huge players in American car accidents. Additionally, driving buzzed is a problem for us in ways it isn’t for other countries. Only Utah, which has a large population of strict, non-drinking Mormons, is trending toward numbers comparable to other industrialized countries.

According to National Safety Council President and CEO Deborah Hersman, “Our complacency is killing us. Americans believe there is nothing we can do to stop crashes from happening, but that isn’t true. The U.S. lags the rest of the developed world in addressing highway fatalities. We know what needs to be done; we just haven't done it.”

So what can Americans do to lower the number of deaths from car crashes?

The NSC has multiple suggestions:

Something simple, however, like just wearing your seatbelt, can make the difference between surviving a car crash and being launched through a windshield. You can’t change how everyone else drives; you can only change your own actions. Keep yourself as safe as possible. Don’t become a statistic.

Learn more about how car accidents can change your life.