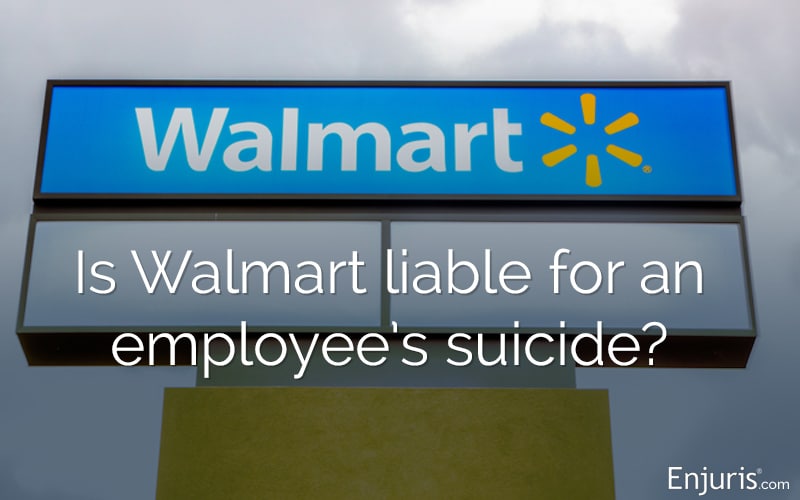 Is Walmart liable for an employee’s death?

That’s going to be for the court to decide.

In November 2019, Maryland Walmart employee Jacob Mace died from a self-inflicted gunshot wound. He left the store on a break one day and never returned. He was found deceased in his truck in a parking lot nearby.

It was later discovered that Mace had spoken about suicide and mental illness struggles at work, and that his manager and another employee had talked in the days before his death about blocking him from purchasing a firearm.

Jacob Mace used the gun he purchased at Walmart for his death by suicide.

The Mace family filed a wrongful death lawsuit against Walmart in state court.

The plaintiffs claim that Walmart was negligent because:

Table of Contents + show
Is Walmart liable?
Wrongful death lawsuits involving gun dealers, distributors, or manufacturers
What happens next in the Walmart lawsuit?

The case has not yet concluded, so we don’t know how the court will decide.

One legal hurdle the plaintiffs must overcome is the “but-for” test.

It seems clear that Walmart was negligent when it sold the gun to Jacob Mace. But the Mace family will need to prove that this negligence caused Jacob’s death.

The but-for test says that an action is a cause of an injury if, but for the action, the injury wouldn't have occurred.

Would the harm have occurred if the defendant hadn't acted in the way they did?

If the answer is NO, then the action caused the harm.

It seems likely that Walmart’s lawyers will argue that if Walmart had not sold Mace the gun, he would have found another way to cause his own death — the cause of his death being the mental illness and not the gun, itself. If they can successfully make this argument, then the company won’t be legally responsible for causing Mace’s death, even if the store is liable for selling the gun illegally (i.e. without properly performing a background check).

However, there is legal precedent for holding a gun retailer responsible for negligent wrongful deaths if it should have known that the gun would be used for that purpose.

In 2019, the Connecticut Supreme Court ruled that a wrongful death lawsuit could move forward against Remington Arms, the manufacturer of the weapon used in the shootings of school children at the Sandy Hook Elementary School in Newtown, Connecticut.

The case is based on the Protection of Lawful Commerce in Arms Act (PLCAA), which protects a firearm manufacturer from being held liable for a crime involving its product. However, a manufacturer or dealer could be held responsible for damages that result from a product defect, breach of contract, criminal misconduct, or other actions — just like any other type of product liability claim. They can also be liable for negligent entrustment if they have reason to know a gun is intended for use in a crime.

The Sandy Hook decision (Soto v. Bushmaster Firearms International) said that the plaintiffs’ claims fell within one of the exceptions to the PLCAA. Specifically, “when a manufacturer or seller knowingly violates a state or federal law ‘applicable to’ the sale or marketing of firearms, and that violation ‘was a proximate cause’ of the harm the lawsuit seeks to vindicate (known as the ‘predicate exception’)”.

In other words, a gun shop or seller can be sued for negligence if it sells to a person it knows — or reasonably should know — is likely to use a firearm to commit a crime.

Using the gun on yourself is not the same as injuring others, but the legal precedent might still hold.

What happens next in the Walmart lawsuit?

We’ll find out eventually as it makes its way through the court system. Based on similar types of lawsuits, it’s possible Walmart will be held liable based on the exceptions to the PLCAA.

If you’re a family member of someone who you believe died as the result of negligence, you can contact a personal injury lawyer for guidance on how to file a wrongful death lawsuit.