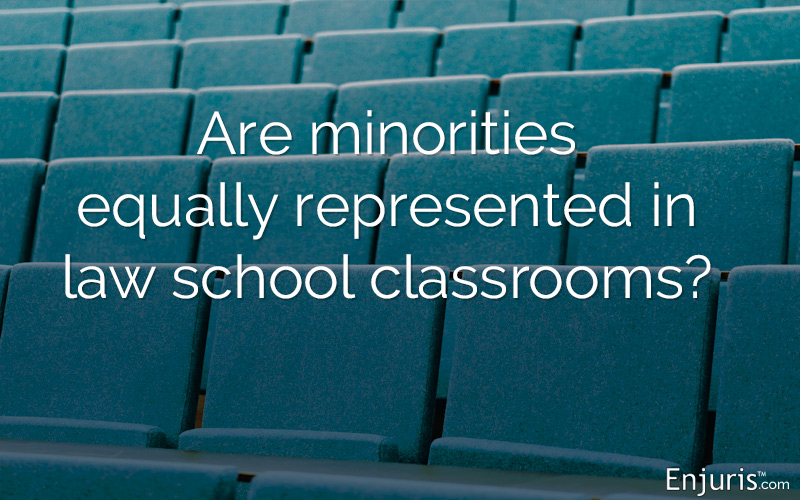 Many experts agree that a diverse classroom benefits all students.

So why is the legal profession one of the least diverse occupations in the nation?

With this question in mind, we decided to investigate the ever-changing demographics of the nations’ law schools.

Here’s a sampling of what we found:

The greatest disparities concern the number of law students identifying as Hispanic or Black—groups that have historically been underrepresented in both law school classrooms and among practicing attorneys.

Some regions of the country seem to attract more minority law students than others.

Similarly, some law schools attract more racial and ethnic minorities than others. Here are the 10 law schools with the highest percentage of students identifying with each race and ethnicity recognized by the ABA Annual Questionnaire:

Conclusions on law school enrollment among racial and ethnic minorities

In general, our research found that minority students tend to be concentrated among a handful of law schools. What’s more, Hispanics and Black Americans remain underrepresented in law programs around the country.

Researchers attempting to understand the lack of Hispanic and Black Americans in law school classrooms have pointed to the high attrition rates for these 2 groups in college and law school, as well as LSAT scores that don’t match the scores of whites and other minorities.

To gain more insight into racial and ethnic demographics in law schools across the US, including which law schools struggle to attract minorities, read our full report on Law School Enrollment by Race & Ethnicity.

If so, leave a comment below. We’re especially interested in hearing from minority law students and undergraduates.

Washington Post, Law is the Least Diverse Profession in the Nation