Accident Help (Home) » Injury Blog » How Can I Help My Neighbor After an Accident? 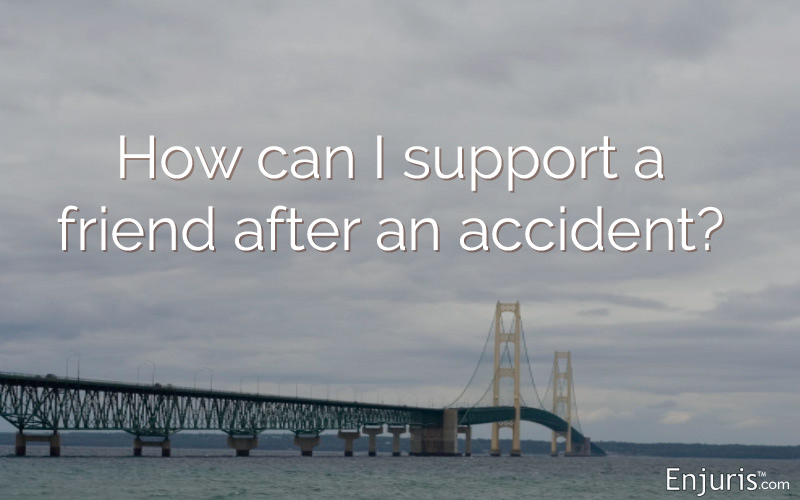 How can I help my new neighbor whose husband was left with a brain injury after a car accident?

Table of Contents + show
How can I help my new neighbor whose husband was left with a brain injury after a car accident?
A lawsuit can help with compensation – but it can never bring back the life you had
How can I help?

Picture this. You’re puttering around the kitchen, waiting for your husband to get home from work.

After a while, you glance at the clock. Something must be holding him up. “He’s a bit later than usual”, you think to yourself.

A little more time goes by, and you wonder why you haven’t heard from him. You start to feel a growing sense of dread.

You’re almost too scared to call him yourself at this point, because you just know something is wrong.

So your eldest son dials up his number.

Someone answers but you can tell right away it’s not your husband answering his phone. It’s a stranger. And that stranger is telling your son something that has frozen him to his spot.

This is how my neighbor Lana told me she first learned of her husband’s devastating car crash on his way home from work 5 years ago.

Their family was forever changed.

For her youngest son, who was 6 at the time, it was as if he lost his father.

His father withstood a catastrophic brain injury from the car accident, leaving him unable to move, eat, speak – essentially ending his life as it had been.

And leaving his family with a completely new way of life; one they would not have chosen in a million years.

At least the two older siblings had happy memories of their family enjoying activities together.

Now they spend nearly all their time at home, when not in school. They are dependable, composed children – as one can only imagine you must be if you are suddenly thrust into a life where you become a caregiver to a parent while you are still in your youth.

I don’t know if the family had attained a handsome settlement from the insurance carrier of the driver who caused the accident. But as a new neighbor looking on, it would seem they have resources to help get through this life they had no hand in creating. They have a new house in a good community. They have a well-equipped mobility van to help with necessary transportation. And I hear they have nursing resources they can access if they choose.

But you just know that all the “compensation” in the world could not make it right again.

Lana’s husband will never be the same. Against doctors’ grim prognoses, he has made small strides in communicating with people, regaining some semblance of speech that only his family can understand. He is learning to drink and eat little by little.

They are working hard toward being able to walk, if even a couple steps. You look in his eyes, and you know he understands much around him.

He wants to shake your hand, but his wife says “don’t”.

He doesn’t know his strength and will hurt you. Then the next moment his shaking hand is dropping his cup of water all over his front, and he’s laughing that too-loud, awkward laugh that makes people feel a tad uncomfortable as they consider whether they should laugh with him or not.

I am inspired by the perseverance and dedication of my new neighbor. She and her children are the primary caregivers for the dad, a big responsibility that binds them to their house.

She confided in me once that she lost a big part of herself that day. Not just the part that was married to a vibrant, young man in the prime of his life. But she has also been unable to pursue the things she enjoys herself – going to the gym, getting dressed up and going out, making new friends – because she simply cannot (and will not) leave her husband at home. She still loves him as much as when they were first married.

I want to be a friend to my new neighbor. I want to know how I can support her, beyond baking a batch of muffins.

How can I help?

I am going to be looking for ways to be the friend she needs at this point in her life. And I will share here what I learn as I dig deeper into ways that a friend or neighbor can help someone who has gone through a catastrophic accident like this.

If you would like to share ideas on how to support someone who is recovering from an accident, please leave a comment. I would love to hear it so I – actually, we all – can learn how to help, how to make the world a better place for those going through a tough time after an accident.

See also How to help a friend after a life-changing accident.