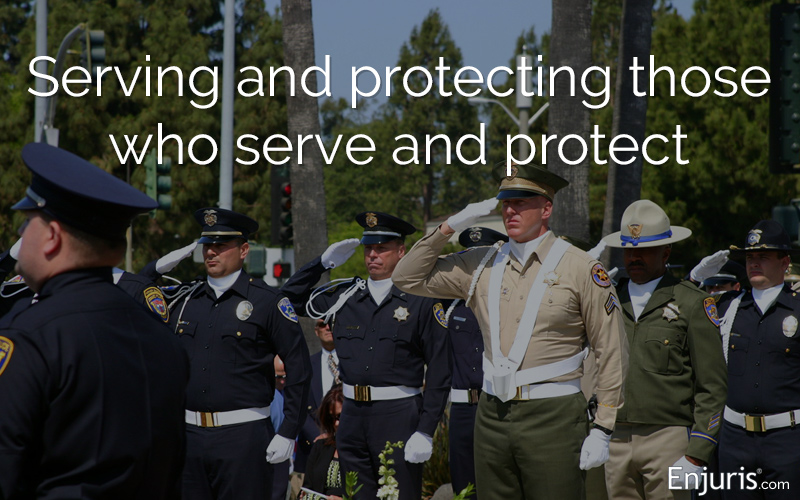 A police officer is killed every 53 hours in the United States. In 2019, 7 police officers were killed in the line of duty in Georgia alone.

In September 2020, 2 law enforcement officers with the Fulton County Sheriff’s Office were killed when the vehicle they were in was rear-ended by a tractor-trailer. The accident happened on Interstate-20 Eastbound at Exit 190 when the officers were stopped for traffic. The Fulton County Sheriff’s Office reported that the officers were en-route to pick up a prisoner for transport at the time of the crash.

When an officer is killed, they often leave behind a spouse and children. Though no amount of money can make up for the loss of a loved one, surviving family members may be able to recover damages depending on the circumstances surrounding the officer’s death.

Workers’ compensation is a form of insurance that provides financial benefits (sometimes called “survivor benefits”) to certain family members when an employee is killed on the job. These benefits are generally equal to 2/3rds of the employee’s average weekly wage prior to their death.

When is an officer considered on the job?

A fatal injury is covered if it arises “out of and in the course of” employment.

Who can receive survivor benefits?

Workers’ compensation is considered an exclusive remedy. This means that family members are generally prohibited from suing the officer’s employer or colleague following a fatal injury.

For instance, in the real-life example of the Fulton County crash, because the accident occurred in the course of their employment (while picking up a prisoner), the officers’ dependents can probably receive survivor benefits.

Additionally, the dependants can file a third-party wrongful death lawsuit against the driver of the tractor-trailer to recover additional damages.

There are 2 primary federal and state death benefit programs that may be available to the family members of officers who are killed in the line of duty.

The state of Georgia offers a number of additional programs and scholarships designed to support those left behind when an officer is killed in the line of duty. These include:

Was your loved one killed in the line of duty in Georgia? Share your experience seeking compensation and support in the comments below.