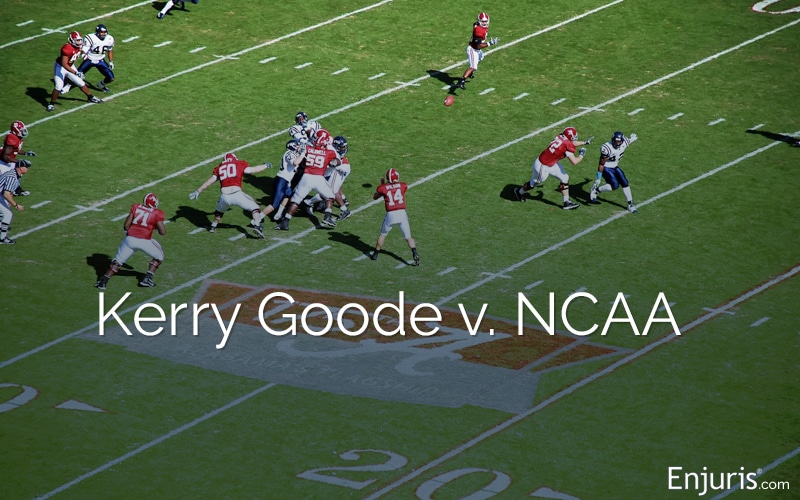 Kerry Goode was a star running back at the University of Alabama who went on to play in the National Football League (NFL) for 4 seasons with the Tampa Bay Buccaneers and Miami Dolphins.

Kenny Goode is also the latest in a long line of former collegiate football players to file a lawsuit against the National Collegiate Athletic Association (NCAA) asserting that the association failed to protect football players from suffering concussions.

Let’s take a closer look at NCAA-concussion lawsuits, including Kenny’s class-action lawsuit filed in the United States District Court for the Middle District of Georgia.

In 2011, several former college football players, including Adrian Arrington, a former football player at Eastern Illinois University, filed a class-action lawsuit against the NCAA alleging that:

“The NCAA has engaged in a long-established pattern of negligence and inaction with respect to concussions and concussion-related maladies sustained by its student-athletes, all while profiting immensely from those same student-athletes.”

Adrian Arrington argued that he and others sustained permanent brain damage because the NCAA failed to adequately supervise, regulate, monitor, and provide reasonable rules to minimize the risk of concussions.

On August 13, 2019, Judge John Lee of the United States District Court for the Northern District of Illinois granted approval of a $75 million settlement in the class-action lawsuit.

The settlement requires adjustments to each institution’s concussion protocol, including:

What’s more, the NCAA must use $70 million to set up a monitoring program under which anyone who played football for an NCAA school prior to 2016 is entitled to free medical testing and evaluation twice a year for up to 50 years.

Enjuris tip:Participation in the Medical Monitoring Program is completely voluntary. If you are an eligible settlement class member and want to participate, you can register here.

Despite agreeing to the settlement, the NCAA continues to deny all allegations of liability and wrongdoing.

Although the plaintiffs in the class-action lawsuit described above have settled their case, dozens of lawsuits continue in the wake of the $75 million settlement.

One of the biggest challenges in these cases, particularly the lawsuits filed by older players, will be proving that the NCAA knew or should have known playing football could lead to long-term brain disease before all the recent research has come to light.

On March 25, 2021, Kerry Goode, on behalf of himself and other former football players similarly situated, filed a class-action lawsuit against the NCAA. The lawsuit alleges that the NCAA acted negligently by failing to protect its players from concussions.

More specifically, the lawsuit alleges that the NCAA owed its players a duty of care.

The lawsuit further alleges that the NCAA breached its duty of care by ignoring decades of scientific research describing the danger of traumatic brain injuries (TBIs) and failing to implement adequate measures to protect players.

“The NCAA breached its duties owed to athletes, including Kerry Goode, by failing to implement, promulgate, or require appropriate and up-to-date guidelines regarding the evaluation and treatment of TBIs on the playing field, in the locker room, and in the weeks and months after they’re sustained.”

Finally, the lawsuit alleges that the NCAA’s breach was the cause of the permanent damage suffered by Kerry Goode and other former football players.

“Kerry Goode suffered from issues including, but not limited to, numbness, twitching, muscle atrophy, fatigue, loss of mobility, slurred speech, weakness... and Amyotrophic Lateral Sclerosis (ALS), commonly known as Lou Gehrig’s disease, a debilitating and permanent condition caused by the repeated head trauma he sustained during his college football career in the NCAA.”

The lawsuit is currently pending in the United States District Court for the Middle District of Georgia.

Can you expect more concussion lawsuits?

You can expect former NCAA football players to continue filing lawsuits against the NCAA for head injuries, but you can also expect similar lawsuits to be filed by youth and high school football players against schools, athletic organizations, and even helmet manufacturers.

The jury assessed 27% of the fault for Rhett’s injuries to Riddell, making the company responsible for paying $3.1 million in damages.

If you or a loved one has been injured as a result of playing football, consider reaching out to an experienced personal injury attorney in your area.