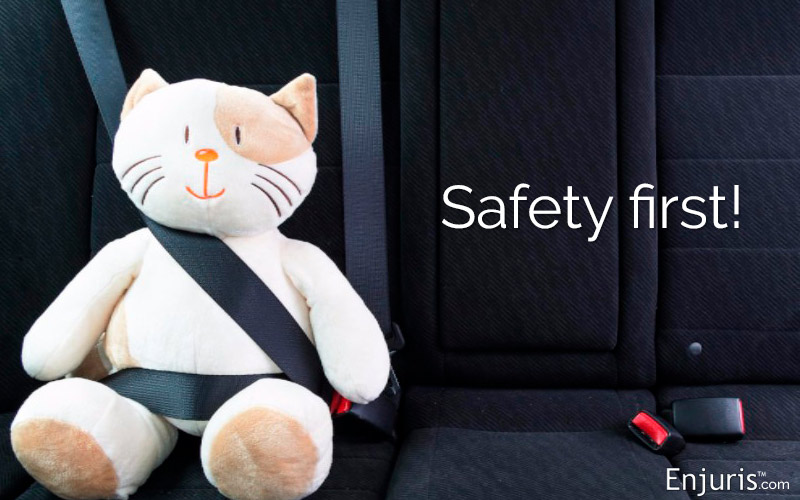 Protect infants, toddlers and children by putting them in the right seat at the right stage

Table of Contents + show
Protect infants, toddlers and children by putting them in the right seat at the right stage
Car seat regulations in Florida
Beyond the law - age, weight or height for car seat safety decisions?
The takeaway for parents

“But I want the big kid seat!” Most parents have heard that refrain from their car seat-bound children.

Some Florida parents themselves are divided on the question of when its ok for a child to sit in the front seat or when to move to a seat belt and booster from a five-point harness car seat. It can be hard to get squirming bodies into those buckles, so many grownups look forward to the day when their children can simply buckle in themselves. But as with many parenting decisions, the short-term effort pays off in the long run.

Florida has its own specific car seat legislation intended to protect children who aren’t large enough for seatbelts. The following information will help you determine whether to keep your child in a booster seat, car seat, or whether he or she can graduate to the big kid seat once and for all.

We recommend holding off as long as possible. Here’s why…

The car seat law in Florida lays out the very minimum that every parent must follow legally. However, parents should understand that Florida law is quite bare bones, and there are other recommendations that could make a difference in your child’s safety in the event of a car accident.

Florida law on car seat use by age:

It is the responsibility of parent or supervising adult to make sure that any child in the car under the age of 6 is properly restrained in a federally-approved child car seat.

What happens if you don’t follow with this law? Aside from the greater risk of death and trauma to your child in an accident, failure to comply can result in a $60 fine and 3 points against your driver’s license.

Beyond that, there are basic safety recommendations that families would do well to heed.

Children should ride in the back seat of the car, though this is not legally required. This is because of concerns with air bag deployment, which – given the child’s height and the location of the air bags – could result in head trauma.

Beyond the law - age, weight or height for car seat safety decisions?

Child safety seats, when used correctly, reduce the risk of death by 70%. And it’s not like federally-approved booster seats cost that much; for that peace of mind, you can pay as little as $15. You can even get your car seat inspected if you want more peace of mind.

Florida was one of the last states to institute booster seats (as of January 1, 2015); before that, it went from child’s seat straight to adult seat belt with nothing in between. That meant the adult seat belt didn’t fall correctly on the child’s body, and if he or she were in an accident, something bad would probably happen. (A seat belt is meant to fall across the hips and shoulders, not the belly and neck. The latter could possibly decapitate a person. Do yourself a favor and don’t envision it.)

Governor Rick Scott signed into law the booster seat initiative, which many in the AAA Auto Club Group and other organizations had been working toward for 14 years. However, Florida still doesn’t follow the American Academy of Pediatrics’ recommendations, which state that children should be restrained in booster seats until they are at least 4’, 9” tall.

Bevin Maynard, child advocacy supervisor at St. Joseph’s Children’s Hospital, said “The magic number is not weight or age. It’s height.” A child under 4’, 9” needs to be in a booster seat, no matter how old he or she is.

The National Highway Traffic Safety Administration stated that improperly restrained children in traffic accidents is the leading cause of death for American kids between the ages of 5 and 14.

Leading cause of death for American kids age 5 - 14: improper restraint in traffic accidents Tweet this

Charles Paidas, director of pediatric trauma surgery at Tampa General Hospital and vice dean of clinical affairs and graduate medical education with the University of South Florida, sees about 100 children every year who undergo trauma surgery at his facility. Many of them would not be so severely injured if they were in the proper booster seats. If they had been properly restrained, the number of injuries could be halved.

It is a step in the right direction, though some states require children to be in restrained seats until the age of 8. The Safe Kids Coalition actually recommends that children use car seats until they reach the manufacturer’s maximum weight guidelines.

The takeaway for parents

There are a lot of conflicting sources and websites offering different information as to what you should do with your child.

The safest thing to do is to keep your kid in a booster seat as long as possible – until he or she is 4’, 9”, and the manufacturer’s maximum weight guidelines for the seat. Once your child has reached that point (and past the age of 6) you should feel comfortable graduating your kid to a seatbelt.