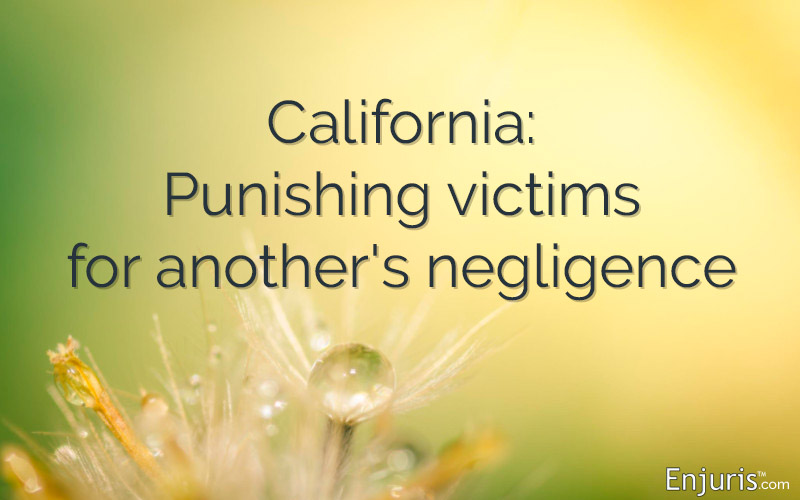 When you punish victims for someone else's negligence

The State of California places a cap on damages in medical malpractice claims. The Medical Injury Compensation Reform Act (“MICRA”) limits non-economic damages to a maximum of $250,000.

This was not some random, hastily-made decision. There's a history there.

Embodied in Cal. Civ. Code section 3333.2, the Act states that “In no action [for injury against a health care provider based on medical negligence] shall the amount of damages for non-economic losses exceed $250,000."

Non-economic damages are also typically called "general damages," and include monetary awards intended to compensate for pain and suffering, loss of enjoyment of life, and emotional harm. As a practical matter, general damages make up the bulk of an injured person's damages in medical malpractice cases.

Economic damages, sometimes referred to as "special damages," are quantifiable and specific monetary losses such as medical bills, lost wages or diminished future earning capacity, and are not affected by MICRA.

Passed in 1975, there's no one specific case that could be called the responsible case for why the cap was implemented.

The statute was designed to address what was then alleged by lobbies for doctors, hospitals and insurance companies to be a crisis in the market for medical malpractice insurance. It was claimed that skyrocketing premiums, purportedly spurred by huge damage awards, threatened the ability of doctors and hospitals to stay in business. Capping non-economic damages was seen as a mechanism for insurers to more adequately forecast and manage risk in the market for malpractice insurance.

Such caps became popular nationwide as a result of an extensive public relations campaign by trade groups and insurance companies, and today California is among 31 states who have some type of mechanism for capping damage awards in medical malpractice claims.

MICRA was controversial almost from its inception, and remains deeply unpopular with patient advocacy groups and trial lawyers who specialize in medical malpractice claims. Several court challenges early in its history involved heart-wrenching stories of patients who suffered life-altering injuries as a result of medical negligence and received huge general damage awards that were reduced to the $250,000 cap.

More recently, the law has faced a number of challenges to its constitutionality based on the argument that it violates the right to have a jury decide damages. This is an argument that has gained traction elsewhere, as eight states have now had their caps overturned by court decisions holding them unconstitutional.

Several recent California Supreme Court opinions, however, while somewhat limiting the impact of MICRA, have not undermined its basic constitutionality, suggesting that any modification or repeal of the law must come from the legislature.

The relatively low amount of the cap, which was not indexed to inflation in the original law and is among the lowest in the nation, has also become increasingly controversial.

Opponents qualified a measure on the statewide ballot in 2014 that sought to adjust the cap for inflation by raising it to $1.1 million. A massive multi-million dollar opposition campaign funded by doctors, hospitals and insurers that outspent proponents five to one defeated the measure at the polls.

Consumer advocacy and trial lawyers' groups continue to argue that the fundamental premise of the law is flawed, that doctors' insurance premiums have not been reduced, and that its primary effect is to deliver a windfall to insurance companies on the backs of patients injured through no fault of their own.

Having had little success in the courts, however, and with the state legislature seemingly unwilling to tackle even the obvious flaws in the law, it appears that victims of medical negligence in California must continue to deal with MICRA's limitation on the general damages they can recover.