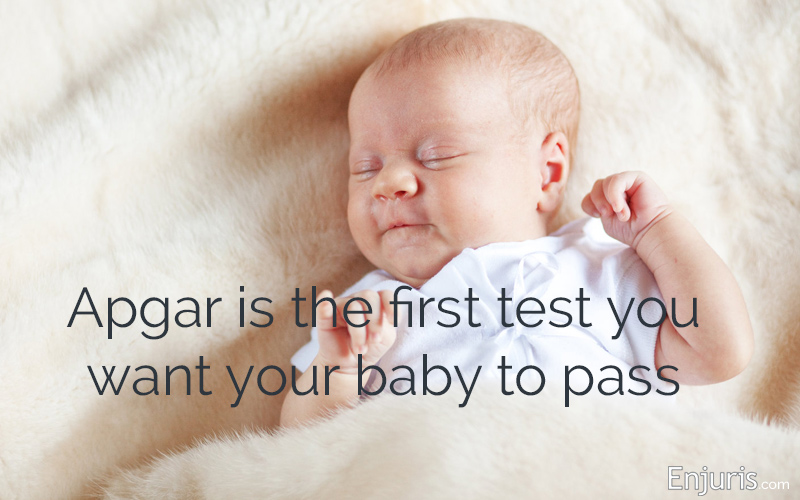 Table of Contents + show
An Apgar can tell doctors a lot about what immediate treatment your baby might need after birth
What is the Apgar test?
What happens if a baby scores lower than 7 on the Apgar test?
Are there other ways to assess the health of your newborn?
Birth defects vs. birth injuries
Does your baby’s Apgar score indicate medical malpractice?
The Apgar test is the first indicator of your baby’s overall health at birth. Many babies whose initial Apgar score is low will receive higher scores in as few as 5 or 10 minutes later. But sometimes an Apgar score indicates a serious injury, or even medical malpractice.

Virginia Apgar was an obstetrical anesthesiologist and medical researcher who invented the Apgar score in the 1950s. The purpose of the Apgar score is to immediately assess the health of a newborn so that they can be treated right away if there are any problems. The Apgar score (also called the Apgar test) is widely credited with reducing infant mortality.

In those first moments after a baby is born, the new parents might not even realize that their brand-new infant is being evaluated instantly for several indicators of their overall health. If you’ve delivered a baby, you know that delivery can be anything from easy-breezy for some lucky people to long, difficult, and traumatic for others.

Regardless of how your baby makes its way into the world, the one sound you want to hear is that first cry from your baby’s lips — and then you breathe a sigh of relief.

What is the Apgar test?

Your baby can score a maximum of 10 points on the Apgar test.

A newborn is evaluated on these criteria and receives 0, 1, or 2 points for each test, and the total is their Apgar score. Often, a baby’s hands and feet can be blue for a while until they become quite warm, which is why many babies don’t score a perfect 10. Most score 7 or higher.

What happens if a baby scores lower than 7 on the Apgar test?

When your doctor or midwife score a newborn as lower than 7 on the Apgar test, they will likely see this as a sign that the baby needs medical attention.

Usually, a low score is caused by:

If your baby has a low Apgar score, they might need oxygen or airway clearing, or physical stimulation to get the heart beating at a healthy rate.

A low Apgar score at 1 minute (or even at 5 minutes) does not indicate serious or long-term health problems. The Apgar test assesses the baby at birth and most babies with low Apgar scores receive medical treatment and have no lingering medical conditions.

Just as importantly, a high Apgar score doesn’t rule out the possibility of brain damage, cerebral palsy, seizure disorders, or other complications.

Are there other ways to assess the health of your newborn?

Ultrasounds, blood tests, and other diagnostics during pregnancy can provide a significant amount of information before your baby is born.

Through the course of prenatal care, your doctor might have diagnosed conditions for the baby that will inform how and when the baby is delivered, and how the doctor is prepared to provide treatment after birth.

A doctor might also perform the Ballard Maturational Assessment (also known as the New Ballard Score), which assesses gestational age. There are also methods called the Downe’s Score and the Silverman Anderson Score that are used to determine if a newborn is in respiratory distress.

Facing facts6 to 8 of every 1,000 babies born in the U.S.America are born with a birth injury. That equals around 28,000 birth injuries per year.

A birth defect is an abnormality in your child’s DNA. For example, Down’s Syndrome, cleft palates, heart murmurs, a club foot, or other issues can arise because of your child’s genetics. These are not preventable, not the fault of the parent, and not medical negligence. A doctor might fail to detect certain defects, but the defect is not caused by the doctor’s action or inaction.

Enjuris tip:Some birth defects are caused by accidents (like a car accident) or from medications taken during pregnancy. A doctor might be negligent if they prescribed medication that is known to cause birth defects and the doctor knew (or should’ve known) that the patient was pregnant.

A birth injury, on the other hand, is a preventable condition that results from something that happened during the process of delivering the baby.

The most common causes of birth injuries include:

Sometimes an Apgar score is used as evidence of medical malpractice in a birth injury, particularly when a low score is related to oxygen deprivation or neurological damage.

The Apgar score isn’t the only way to diagnose a birth injury. It’s just one more piece of evidence and a part of the diagnosis.

The Apgar test can also be subjective depending on who performed the evaluation. There can be slight differences between how the obstetrician views and evaluates the baby and how a pediatrician or neonatal nurse would do so. It’s also a score based on human observation, so there’s a possibility that one person’s evaluation that a baby is “limp” might be different from what another person considers “limp.”

If your baby has suffered a birth injury, there are resources and help for families. A birth injury can be heart-wrenching, and can also result in a lifetime of financial obligations. If it’s determined that medical malpractice or negligence played a role in your baby’s birth injury, you can be compensated for your costs.

Where can you find a qualified birth injury attorney near you? Use the free Enjuris attorney directory to start your search.