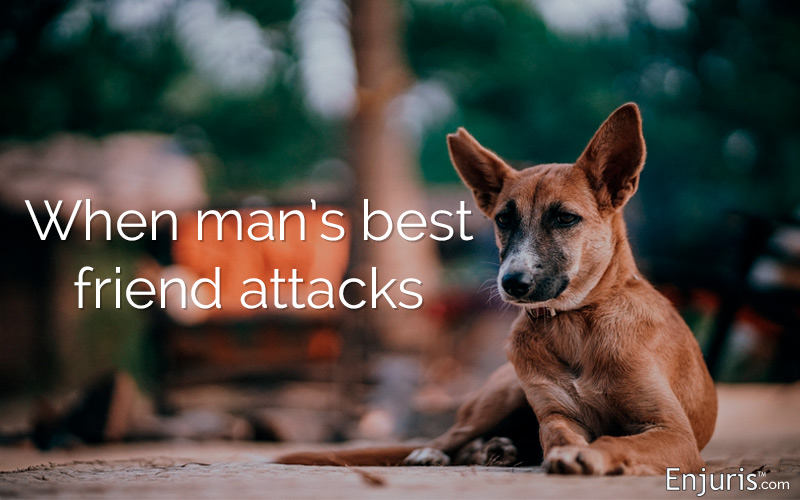 Legal options when a dog bites and injures someone

Table of Contents + show
Legal options when a dog bites and injures someone
Arizona’s dog bite laws
Who’s liable in a dog bite case?
Defenses to dog bite claims
What damages can be recovered?
Preventing dog bites and animal attacks
What to do if you’re bit by a dog
Whether you’re a dog owner or a person injured by a dog, it’s important to know the laws and defenses concerning dog bites in Arizona.

According to the most recent estimates, more than 4.5 million people are bitten by a dog every year. In addition to being painful, dog bites can cause injuries and infections. The Centers for Disease Control and Prevention (CDC) report that roughly 1 in 5 people bitten by a dog require medical attention.

In Arizona, which is consistently ranked one of the most pet-friendly states in the country, there were 34,151 emergency department visits and 2,358 inpatient hospitalizations for dog bites from 2008-2012.

So what happens when someone is bitten by a dog in Arizona? Let’s take a close look at Arizona’s dog bite laws.

Arizona is one of a handful of states with a strict liability law for dog bite claims. This means that a dog owner is liable for the injuries caused by their dog as long as the injured person can prove that:

Dog owners in Arizona are strictly liable for dog bites. Tweet this

This is different from many states which follow a “one-free-bite rule,” which protects the owner from being liable for a dog bite unless the injured person can show that the owner should have known about their dog’s violent tendencies (for example, if the dog had previously bitten someone and the owner knew about it).

But what happens if a dog causes damages without biting you?

It’s possible for a dog to injure a person without biting them. For example, a dog left off his leash at the park may jump on a child and scratch the child’s eye causing serious damage.

Under Arizona law, any person injured by a dog can bring a negligence claim as an alternative to the statutory strict liability claim. Under a negligence claim, the injured person would have to show that the dog’s owner failed to use reasonable care to control their dog and this failure resulted in the injury. In the example above, the dog’s owner would likely be found negligent for failing to put a leash on their dog.

The dog owner is almost always liable in a dog bite case. The only exception is if the dog is stolen from the owner and then bites someone.

There are two primary defenses to a dog-bite claim.

First, the owner won’t be liable if they can prove that the injured person provoked their dog. There’s no clear definition of what constitutes “provocation” for purposes of this defense. However, case law suggests that it’s not always necessary that the dog be provoked directly. For example, physically attacking the dog’s owner while the dog is nearby could constitute “provocation” sufficient for the owner to avoid liability.

Second, the owner may not be liable if the injured person was bit while unlawfully on the owner’s property. However, in some cases, the owner has a duty to warn trespassers that a dog is on the property by, for example, posting signs.

In Arizona, a person injured by a dog bite can recover the following damages:

Keep in mind that many homeowners insurance policies provide coverage for dog bites, which increases your chances of recovery in the event that the owner doesn’t have any money.

The CDC provides a list of “do’s and don’ts” to help prevent dog bites:

Things you should do to avoid being bit by a dog include:

Things you shouldn’t do include:

What to do if you’re bit by a dog

There are 3 critical steps you should take following a dog bite.

Step 1: Report the dog bite to your appropriate municipal animal control office. The relevant contact information is listed below.

Be prepared to describe the dog and the location where the attack occurred. Officials will try to find the dog to investigate the claim and may take further action to quarantine the animal at a pound or veterinary hospital.

Step 2: Seek medical attention and keep track of all your medical expenses. This evidence will be critical if you pursue a lawsuit.

Step 3: Talk to an experienced Arizona personal injury attorney. The statute of limitations for filing a dog bite claim is only 1 year (2 years if you file a negligence claim) from the time of the dog bite. Because of this, it’s important to contact an attorney sooner than later so you don’t risk having your case dismissed on a technicality.