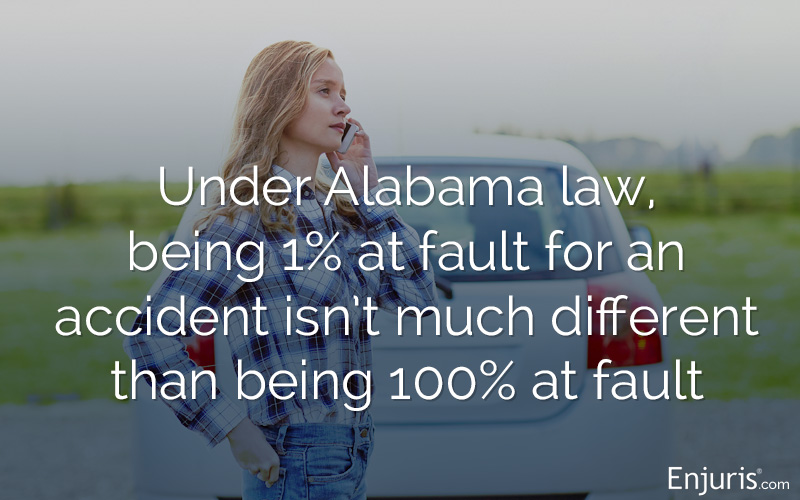 Determining liability for an accident usually means determining who was careless

If you spend any time around attorneys or insurance agents, you’ve probably heard the term “negligence” more times than you care to count.

Negligence is by far the most common basis for personal injury lawsuits and car insurance claims in the United States.

In short, “negligence” refers to a person’s failure to exercise the appropriate degree of care. But, as is often the case in the legal world, it’s a bit more complicated than that.

Let’s take a look at negligence and what it means for your Alabama personal injury claim.

The vast majority of accidents happen because someone is careless. If a person’s carelessness falls below a legally-recognized standard, the person’s behavior is considered “negligent,” and the person will be liable for any injuries that result from their negligence.

Negligence is the failure to meet a legally-recognized standard of behavior established to protect society against unreasonable risk. Tweet this

Common examples of actions (or omissions) that are usually negligent include:

How do you prove negligence in Alabama?

Negligence is a distinct cause of action, which means you can prove negligence and recover damages if you can establish 4 elements:

One of the elements most often discussed in negligence lawsuits is the element of duty.

In most cases, the standard of care a defendant owes a plaintiff is the degree of care that a “reasonable person” would exercise under the same circumstances. In other words, the judge or jury must ask themselves: What level of care would someone of ordinary prudence have exercised in the same situation?

Judges and jurors often determine whether a defendant acted with a reasonable degree of care by considering the following factors:

Consider the example of someone who decides to drink and drive. The likelihood that someone will get hurt is high (drunk driving accidents are common), the severity of the harm is also high (car accidents often result in serious injuries or fatalities) and the burden of precautions to eliminate or reduce the risk of harm is incredibly low (the defendant could call a taxi). Consequently, someone who consumes alcohol and drives is not acting with a reasonable degree of care.

Alabama courts have held that children under the age of 7 do not possess the mental capacity to be negligent. Tweet this

Another element that’s often discussed in negligence cases is the element of causation.

In short, you must prove that the defendant’s breach caused your injuries. In other words, but for the defendant’s act (or omission), the injury would not have occurred. Causation seems like an easy enough element to prove, but it can be surprisingly tricky. Consider the following example:

In 1980, Bill enrolled as a student at the University of Alabama. For 4 years, Bill lived in a dorm next to a large garden. During that time, the gardener hired by the school sprayed a toxic product called Weed Away to eliminate weeds.

In 1990, Bill developed a rare form of cancer that most doctors agreed was caused by prolonged exposure to a toxic chemical commonly found in weed killers.

Bill, believing Weed Away was responsible for his cancer, sued the University of Alabama.

On the surface, it seems likely that Weed Away caused Bill’s cancer. But how can Bill definitively prove that his cancer was caused by Weed Away and not some other weed killer that he was exposed to at some other point in his life? What if there are other causes of his cancer, such as genetics? What if some doctors don’t believe the toxic chemical at issue even causes cancer?

As you can see, proving causation, particularly in cases in which the injury becomes apparent long after the accident or exposure, can be difficult.

The term “negligence per se” refers to a legal doctrine whereby an act is considered negligent if the act violates a statute.

For example, if the defendant violated a fire code and, as a result of this violation, your building was damaged by a fire that wouldn’t have occurred had the defendant followed the code, the defendant would be liable under the doctrine of negligence per se.

Alabama adopted a pure contributory negligence statute, which means a plaintiff is barred from recovering ANY damages if they’re even 1 percent responsible for causing their accident.

Let’s look at an example of an Alabama contributory negligence auto accident:

Raymond is driving east on Old Madison Pike. It’s dusk and it’s drizzling a little. Although visibility is poor, Raymond doesn’t have his headlights on.

Anna is driving west on Old Madison Pike. She receives a text and begins reading it. As she’s reading the text, she swerves into the eastbound lane and crashes into Raymond.

Raymond suffers a serious back injury and sues Anna for $1 million.

Under Alabama’s pure contributory negligence rule, Raymond is barred from recovering ANY damages.

What should you do if you were injured as a result of someone else’s negligence?

If you’ve been injured as a result of someone else’s negligence, you may be able to recover damages by filing a personal injury lawsuit. A personal injury attorney can help you determine the value of your claim, gather evidence and establish the elements of negligence.

To find an experienced Alabama personal injury attorney in your area, consult our free online directory.