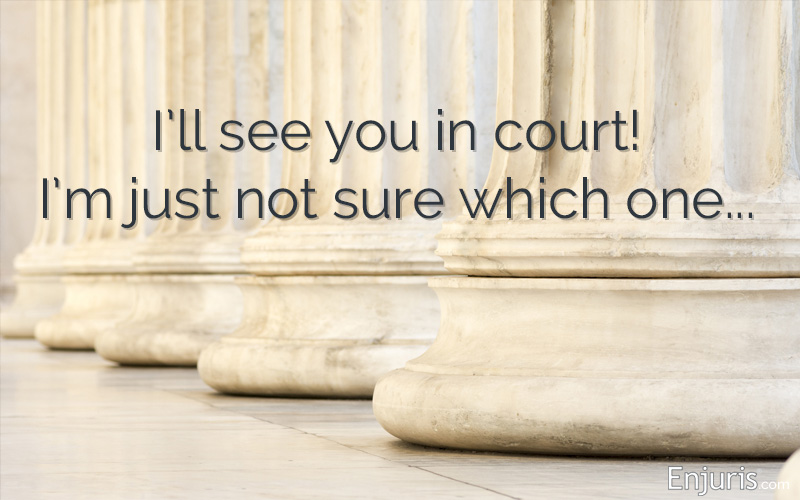 You’ve been injured in an accident caused by someone else’s negligence. You know you want to sue this person for damages, but you have no idea where to file the lawsuit. What should you do?

In Alabama, most personal injury lawsuits will be filed in the circuit court located in the county where the defendant lives or where the accident occurred. However, there are certain situations in which you might file your lawsuit in an Alabama district court or even a federal court.

Let’s take a look at the ins and outs of the Alabama court system.

Alabama district courts handle civil cases where the dollar amount in question (i.e., the amount of damages you’re requesting from the defendant) is more than $6,000 but less than $20,000. District courts also have jurisdiction over criminal misdemeanors.

How do I file a lawsuit in small claims court?

Filing a lawsuit in small claims court is pretty straightforward. To do so, follow these steps:

The majority of personal injury lawsuits are filed in Alabama’s circuit courts.

Circuit courts hear all types of cases, including:

Circuit courts also have appellate jurisdiction over certain legal matters that may be appealed directly from small claims courts or district courts.

There are 67 counties in Alabama, which are divided into 41 judicial circuits.

The largest judicial circuit in the state is the 10th Judicial Circuit which encompasses Jefferson County and is the seat of 27 circuit court judges.

Enjuris tip:You can use this map from the Alabama Administrative Office of Courts to locate your circuit court.

Circuit courts are much more formal than small claims courts (or even district courts). Parties are almost always represented by attorneys. What’s more, there are very strict rules of evidence and rules of civil procedure that must be followed.

If you’re not happy with the decision reached in your circuit court case, you can appeal your case to the Alabama Court of Civil Appeals located in Montgomery, Alabama.

The court of civil appeals has jurisdiction over appeals in which the amount of controversy does not exceed $50,000.

There are 5 judges on the Alabama Court of Civil Appeals. They are elected in statewide elections to 6-year terms. A presiding judge is the administrative head of the court.

The Supreme Court of Alabama is the state’s highest court. It consists of a chief justice and 8 associate justices.

Your personal injury case will probably not be heard by the Supreme Court of Alabama. The Court has the authority to:

The Supreme Court of Alabama makes rules governing the administration, practice and procedures for Alabama’s courts.

Enjuris tip:Learn more about the Supreme Court of Alabama, including past decisions of the Court and rule changes issued by the Court.

There are 3 federal courts in Alabama:

Federal courts are courts of “limited jurisdiction” because they can ONLY hear the following types of cases:

Chances are your personal injury lawsuit doesn’t involve the U.S. Constitution or a federal law (although it’s possible). It’s more likely that your case has “complete diversity.”

Choosing a venue for your personal injury case

Once you’ve figured out the appropriate court system, you need to decide the proper venue. The term “venue” refers to the geographic location of the court.

In other words, you may decide you need to file your case in circuit court, but the circuit court of which county?

You’re involved in a car accident in Montgomery with a driver who was intoxicated. You decide to sue the intoxicated driver for $30,000.

You live in Washington County. The defendant lives in Tuscaloosa County.

Where can you file your personal injury lawsuit?

Unfortunately, you can’t file your lawsuit in Washington County even though it’s where you live. This is because the Alabama venue rules (and the venue rules of all states) are concerned with making sure defendants can’t easily be dragged across the country by plaintiffs.