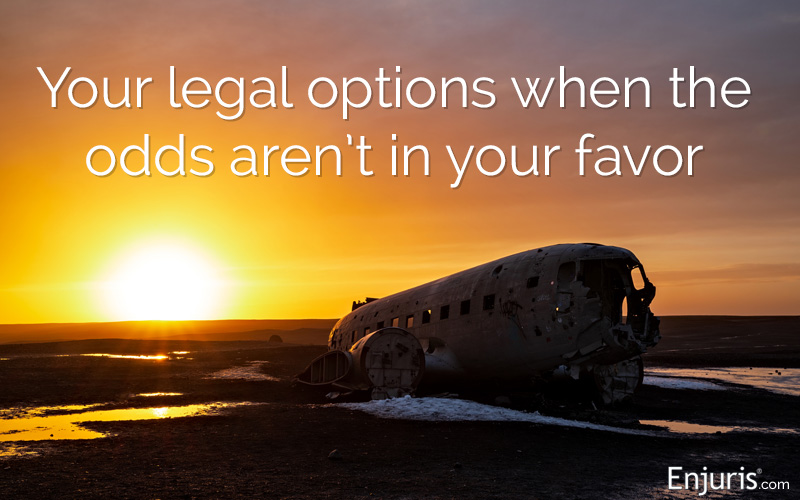 What are your legal options following a plane crash or aviation injury?

Table of Contents + show
What are your legal options following a plane crash or aviation injury?
How common are plane crashes?
Common causes of plane crashes
Can I sue following a plane crash?
The Aviation Disaster Family Assistance Act of 1996
Alabama statute of limitations for aviation accident lawsuits
Alabamans have witnessed their fair share of plane crashes, from the infamous 1991 crash in Ensley to the 2007 crash involving Alabama Senator Trip Pittman. Find out what legal options exist for crew members and passengers injured in an aviation accident in the Cotton State.

On July 10, 1991, a commuter plane crashed into 2 houses in the quiet neighborhood of Ensley in Birmingham, Alabama.

The cause of the crash was attributed to the captain's decision to attempt an instrument landing system (ILS) approach in a severe thunderstorm, resulting in a loss of control of the plane.

“We were in a flat spin,” recalls passenger Mabry Rogers. “The plane took the roof of the house across the street. There was a great deal of anguish in the cabin from all of us. I remember thinking, you don't survive a plane crash."

The crash killed 13 out of 15 people in the plane and injured 4 on the ground.

Plane crashes are extremely rare, but, as Mabry Rogers can attest to, they do happen. Find out what legal options exist for plane crash survivors as well as the loved ones of those lost in a plane crash.

How common are plane crashes?

To understand your odds of being involved in a plane crash, it’s important to understand the difference between commercial and general aviation flights:

You’re much more likely to be involved in an accident on the drive to the airport than you are once you board your plane.

Just like cars, planes crash for all kinds of reasons, from operator error to manufacturing defects.

According to the National Transportation Safety Board (NTSB), the most common causes of commercial aviation accidents include:

Real Life Example:Two pilots were killed when a UPS Airlines cargo plane crashed short of the Birmingham-Shuttlesworth International Airport and burst into flames in 2013.

Following an investigation, the NTSB blamed the crash on pilot error. Specifically, the captain:

The NTSB also criticized UPS for failing to update the software on a ground proximity warning system, which would have given the crew an earlier indication that they were too close to the ground.

Can I sue following a plane crash?

As is the case with car crashes, passengers involved in plane crashes can file personal injury lawsuits to recover damages if they can prove that someone else was at fault for their accident. Crew members can typically file workers’ compensation claims to recover damages.

Let’s take a closer look at your legal options following a plane crash:

If a plane crash is caused by pilot error or some other human error, an injured passenger may be able to file a lawsuit based on negligence. A negligence claim alleges that someone else’s carelessness caused your injury.

To establish negligence in Alabama, the plaintiff needs to prove the following 4 elements:

Filing a product liability lawsuit after a plane crash

Real Life Example:Alabama Senator Trip Pittman survived a plane crash in 2007 when the single-prop 1970 Bellanca Super Viking he was riding in experienced engine problems about 4,000 feet above the swamps of northwest Florida.

When suing the federal government, plaintiffs must do so under the Federal Tort Claims Act (FCTA). Filing a lawsuit under the FCTA is a lot like filing a personal injury lawsuit based on negligence, however, plaintiffs are required to follow special rules and procedures.

Enjuris tip:Want to sue the federal government? We encourage plaintiffs to consult with a federal tort attorney in your area who specializes in these complex cases.

Filing a wrongful death lawsuit after a plane crash

If someone is killed in a plane crash, their surviving relatives can receive compensation for their loss by filing a wrongful death lawsuit. As is the case with other personal injury lawsuits, the relative will need to prove that someone else was at fault for the accident in order to recover damages.

Filing a workers’ compensation claim after a plane crash

It’s important to keep in mind that you don’t have an unlimited amount of time to file a lawsuit after a plane crash.

Alabama requires plaintiffs to file personal injury claims within 2 years of being injured in most situations. The same 2-year statute of limitations exists for workers’ compensation claims and claims filed under the FTCA.

If you fail to file your claim before the time limit expires, your claim will be forever barred. As a result, it’s important to meet with an attorney as soon as possible following a plane crash.

You can find an Alabama attorney to handle your plane crash lawsuit in our free online legal directory.