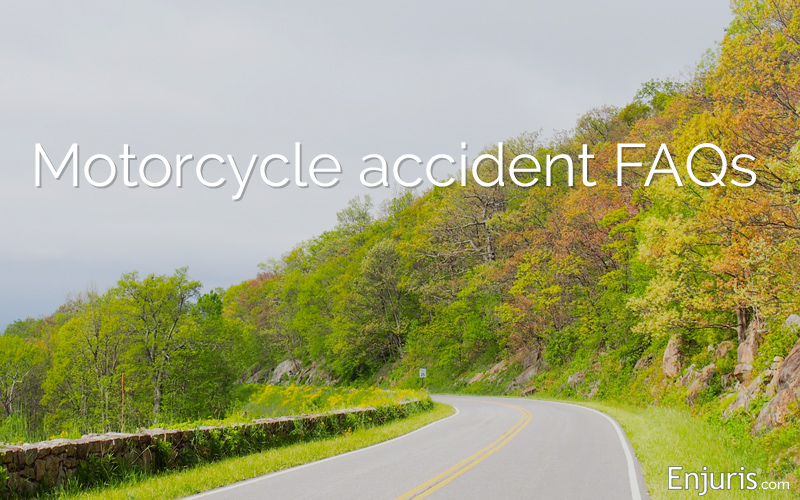 Questions to the most commonly asked questions about motorcycle accidents, laws, and injury claims in the Old Dominion state

According to the National Highway Traffic Safety Administration (NHTSA), motorcyclists are 28 times as likely as passenger-vehicle occupants to die in a crash. Even when motorcycle crashes aren’t fatal, they often result in serious injuries.

When attempting to receive compensation, motorcyclists generally believe they’ll be treated the same as passenger-vehicle occupants. Unfortunately, there’s an implicit bias against motorcyclists that may prevent them from recovering the damages they deserve.

Additionally, motorcycle-specific laws may impact a motorcyclist’s ability to recover damages. This is particularly true in Virginia, which follows the pure comparative fault rule.

Here at Enjuris, we want you to recover all the damages you deserve. With that goal in mind, let’s take a look at some common motorcycle-accident questions you might have.

Motorcycle crashes aren’t as frequent as passenger-vehicle crashes, but they tend to be more serious.

The number of motorcyclists killed in crashes dropped to 4,985 in 2018 (a 5% decrease), but motorcycle riders are still overrepresented in traffic fatalities.

There is a perception among many people that motorcycles are always at fault for motorcycle crashes.

This is, of course, not true.

Common causes of motorcycle accidents that aren’t the fault of the motorcyclist include:

Of course, there are times when a motorcyclist does cause an accident. Common causes of accidents that are the fault of the motorcyclist include:

Do I have to wear a helmet while riding a motorcycle in Virginia?

Section 46.2-910 of the Code of Virginia says that every motorcyclist and motorcycle passenger must wear a motorcycle helmet that meets or exceeds the standards and specifications of the Snell Memorial Foundation, the American National Standards Institute, or the Federal Department of Transportation.

In addition to being the law, wearing a motorcycle helmet is just common sense.

Is lane splitting legal in Virginia?

Lane splitting is when a motorcyclist rides between 2 lanes of cars heading in the same direction. Most motorcyclists split lanes on the highway when traffic slows, but some also split lanes in order to filter to the front of traffic at a stoplight.

Do I need a license to ride a motorcycle?

Yes! You need a license to ride a motorcycle, and a regular motor vehicle license is not sufficient.

To operate a motorcycle in Virginia, you need a valid Class M, M2, or M3 designation, or a motorcycle driver’s license.

Enjuris tip: Wou can learn more about obtaining a motorcycle license at the Virginia Department of Motor Vehicles.

Do I need motorcycle insurance in Virginia?

You are NOT required to carry liability insurance in Virginia if you pay a $500 uninsured motor vehicle fee (UMVF) to the Virginia Department of Motor Vehicles. Once this fee is paid, you are free to operate a motorcycle in the state uninsured for 12 months (at which point you’ll need to pay another fee).

However, if you cause an accident, you’ll be personally liable for whatever damages result.

Are there other laws I should know about?

As a motorcyclist in Virginia, you’re subject to the same laws as other motorists. In addition, you must comply with some motorcycle-specific laws. Most of these laws can be found in Article 8, Chapter 13 of the Code of Virginia.

Here are the highlights:

Who’s liable for a motorcycle accident?

In order to recover damages after a motorcycle crash in Virginia, you have to prove that someone else caused the accident. Usually, this “someone else” is another driver or motorcyclist.

Enjuris tip: In most cases, proving that someone else caused your accident means proving that they were negligent. Learn more about the elements you must prove to establish negligence.

Examples of actions that might result in a motorcyclist or motor vehicle driver being liable for an accident include:

In some cases, a motorcycle crash isn’t caused by a motor vehicle driver or motorcyclist, but is instead caused by:

What happens if I’m partially responsible for the motorcycle crash?

Virginia is one of the few states where a plaintiff is prohibited from recovering any damages if they’re found even the slightest bit at fault. This law is known as the “pure contributory negligence law.”

If you or a loved one has been injured in a motorcycle accident, a personal injury attorney can help. Find an attorney in your area using our free online legal directory.