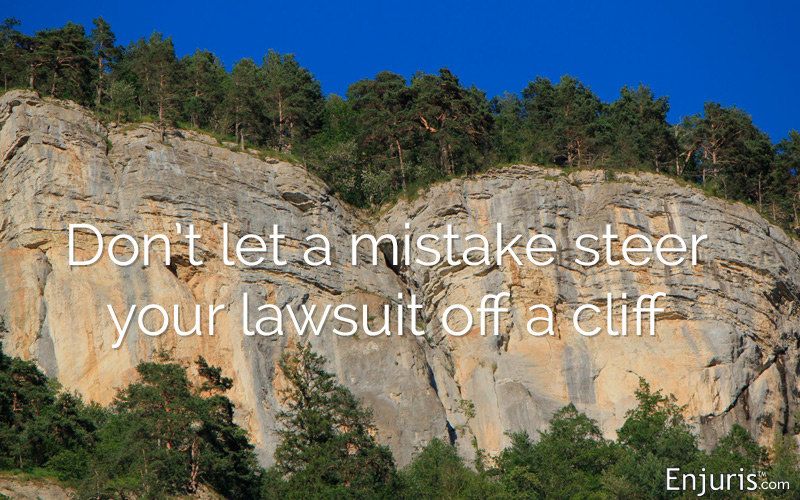 Being involved in a truck accident is bad enough. Don’t make these common mistakes that can jeopardize your lawsuit.

A truck accident is scary and stressful.

No one is prepared for the truly unexpected. And, as much as you might want to deal with it your own way, you also want to be sure that you’re keeping an airtight legal case intact. Don’t let a desire to share on social media or “handle” things yourself get in the way of receiving the compensation you need and deserve.

What to do after a truck accident to protect your case

Let’s look at how to avoid some of the most common mistakes people make after a truck accident:

If you feel like you weren’t hurt in an accident, you might be tempted to skip the hospital or doctor and just go on your merry way. But don’t. Some injuries, like concussions or back problems, don’t appear right away. It’s important to head to a medical facility right away to get a full assessment of your physical condition. That way, if symptoms appear in the days or weeks following an accident, you’re able to show that the accident was what caused the injuries.

Tip #2: Gather evidence at the scene

If you’re in a physical condition to evaluate the scene, and if it’s safe to do so, try to gather evidence that might be useful in court. Certainly, if you need medical attention, leave evidence-finding to someone else. Likewise, if the accident was in traffic and there are other cars passing nearby or it’s unsafe to be walking around, then don’t put yourself in more danger.

A police report and other documentation will be crucial to your case. Any information you can take down about the other vehicle, including the license plate, registration number, and any indicators of ownership are important, in addition to the driver’s CDL (commercial driver’s license).

If you can take note of weather and road conditions, signs or road signals, or other factors — even if they don’t seem significant to you at the time — it can be beneficial to present as clear a picture of the scene as possible.

Enjuris tip: Part of evidence-gathering is taking photos. Fortunately, we live in an era in which almost everyone has a phone that doubles as a camera. If it’s safe to do so, use your phone to take photos of the condition of all involved vehicles, the intersection or roadway where the accident happened, the weather conditions, road conditions, any other hazards, and even the debris from the crash. A picture can be worth a thousand words.

Consider these tips for taking accident scene photos after a car crash.

Witnesses can often make or break a legal case. If there were witnesses to the accident, get their names and contact information. The police should do this as part of their reporting, but an accident scene can be chaotic and the police might be more involved in helping people who are injured, redirecting traffic around the accident, or cleaning up the area.

There’s nothing that would keep a witness from leaving, so if you can catch them before they do and get a phone number, it might help you down the line.

Tip #4: Be careful about posting on social media

We live in a culture that’s accustomed to sharing the details of our personal lives in a public way. We know as soon as our friends start or end a relationship, the moment a baby is born, when someone’s puppy is sick, if they’ve had a rough day at work, and even what they’re having for dinner. It might feel natural to hop straight into your favorite social network and share with your friends or followers that you’ve been in an accident — but try to resist.

It might seem innocent to post: “I was in an accident today, but don’t worry - I’m fine! :)”. You might feel like you’re just letting your friends and family know what’s going on without making them worry.

But, that “I’m fine” can lead to big issues in a legal case. If the insurance adjuster or opposing attorney catches wind that you said you were fine, they’ll interpret that to mean that you don’t deserve any money for medical treatment, lost wages, or related expenses.

Once something is online, you don’t own it.

Deleting a post later doesn’t purge it from ever having existed. If your case ends up at trial, or there’s a deposition, that opposing attorney could call your mom to the stand and say, “Did you read on Facebook an hour after the accident that your daughter said she was ‘fine’?” If she’s under oath, she has no choice but to answer yes.

And that could cost you a lot of money.

Even if you avoid posting anything about the accident itself, your social media presence in the days, weeks, and months that follow might say a lot about your condition.

It’s not necessarily that you need to quit all social media following an accident, but you need to be mindful of what you say or show because any photo or comment that indicates liability or physical condition can work against you in a legal proceeding.

Tip #5: Let your lawyer communicate with the insurance company and any of the parties involved

In other words, don’t talk with the insurance company.

In most truck accidents, liability is complicated. There can be fault on the part of the driver, the driver’s employer, the distributor, the manufacturer, or... you. There could be several insurance companies involved, and each will try to make its client level of responsibility as little as possible.

Your truck accident lawyer is the best person to manage this communication in order to keep your liability as minimal as possible.

Enjuris tip: Above all, never agree to a settlement without your lawyer’s input. The insurance company might call you and try to make a “reasonable” offer, but the likelihood is that the offer is far less than what you can receive based on your lawyer’s negotiations. Don’t try to negotiate your own settlement. Once you agree to settlement offer, you lose the right to pursue the claim further.

Tip #6: If asked for a recorded statement, consult your lawyer

If the insurance adjuster asks you to make a recorded statement, you can refuse. The insurance company is going to use some practiced, tricky tactics in order to get you to admit to fault. No matter how savvy you think you are, don’t give them the opportunity to get you to say something that will impact your case.

Along those lines, the insurance adjuster might ask you to sign a blanket medical authorization that would allow them to receive your medical history. You should politely refuse since this could include irrelevant or private information that the insurance company could use to reduce the amount of your claim.

Tip #7: Be aware of the statute of limitations for a truck accident in your state

Different states have different time periods for when you must file a claim. If you miss the deadline, the court can refuse to hear your case.

Avoid the biggest mistake after a truck accident

What’s the biggest mistake after a truck accident?

The biggest mistake is not hiring a truck accident lawyer right away. You might have been in collisions with passenger cars before, and everything worked out fine. This happens all the time.

But truck accidents are a different beast.

For starters, there can be several entities involved, and there could be shared liability. In addition, the trucking company and its insurer will do almost anything to make the situation go away, including making offers that sound enticing and that might seem like a lot of money. If you have serious injuries though, your expenses will add up fast and you need an experienced lawyer who can determine not just what you need now, but what you’ll need in the future.

The Enjuris Personal Injury Law Firm Directory will direct you to a truck accident lawyer near you who knows the ins and outs of the law, who is experienced and compassionate, and who can help you to get every dollar you deserve. Don’t accept anything less.