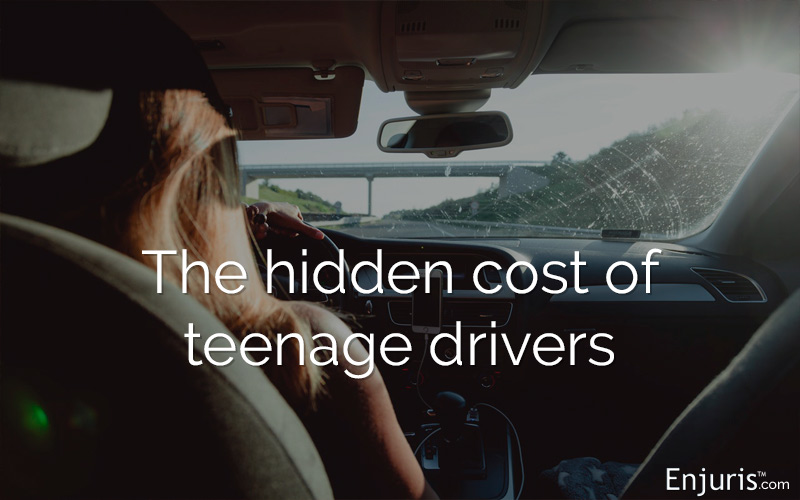 Can parents be sued if a teen driver causes a crash in Texas?

Table of Contents + show
Can parents be sued if a teen driver causes a crash in Texas?
Teen car accident statistics
Are parents liable for damages caused by your teen’s car accident?
What can you do to keep your teen safe?
Texas consistently ranks 1st with respect to fatal car accidents caused by teens. Learn what liability parents have when their teens are involved in a car accident.

There are few things more stressful than being the parent of a teenager. Though your youngster undoubtedly brings you a great deal of joy, their newfound independence—embodied by their brand new driver’s license—comes with some questions and concerns.

Are teens more likely to get into car accidents than adults?

Can teen car accidents be prevented?

Are you responsible for the damages caused by your teen if they get into a car accident?

Here at Enjuris, we want to eliminate some of the stress associated with parenting a teenager. With that in mind, let’s take a look at some of the issues surrounding teen driving in Texas.

Motor vehicle crashes are the leading cause of death for teens in the United States. In 2017, 2,433 teens ages 16-19 were killed, and 292,742 teens were treated in emergency departments for injuries suffered in motor vehicle crashes.

In the US, 6 teens die every day due to motor vehicle crashes. Tweet this

Some of the factors that lead to teenagers being particularly prone to car accidents include:

Facing factsAccording to the Texas A&M Institute, the vast majority of teens don’t consider driving 5-10 miles above the speed limit to be dangerous. Perhaps unsurprisingly, drivers ages 15-20 consistently have the highest representation of speed-related fatal crashes (32% in 2016) compared to any other age group.

Are parents liable for damages caused by your teen’s car accident?

Many states follow the family car doctrine, which states that the owner of a vehicle is liable for damages or injuries resulting from a car accident, even if some other member of the family (such as a teenage child) is driving the vehicle—regardless of whether or not the owner gave permission.

Jane was aware that her daughter had received 2 speeding tickets and been in 4 car accidents in the 12 months since receiving her driver’s license. All 4 accidents were Olivia’s fault and 2 of them resulted in serious injuries to the passengers. What’s more, Olivia had never towed a horse trailer (or any other type of trailer) before.

In this hypothetical, is Jane, Olivia’s mother, liable for the damages?

Probably. Jane allowed Olivia to use her vehicle despite knowing that Olivia was a reckless driver or, at the very least, not competent to tow a horse trailer. Olivia was subsequently negligent and caused the accident.

What can you do to keep your teen safe?

The best way to avoid being liable for your teen’s accident is to keep them from getting into an accident in the first place.

The National Highway Traffic Safety Administration has some tips for keeping your teen safe:

The Texas organization I Drive Safely also recommends entering into a driving contract with your teen that lays out your respective duties and expectations.

Enjuris tip: Adding a teen to your auto insurance is expensive. If your teen has good grades, ask your car insurance provider if they offer discounts for good students. If you’re purchasing a vehicle for your teen to drive, be sure to look for one with safety features that can lead to lower insurance quotes, such as anti-lock brakes and anti-theft devices.

If your teen is involved in a car accident, consider contacting a Texas personal injury attorney to explore your legal options.