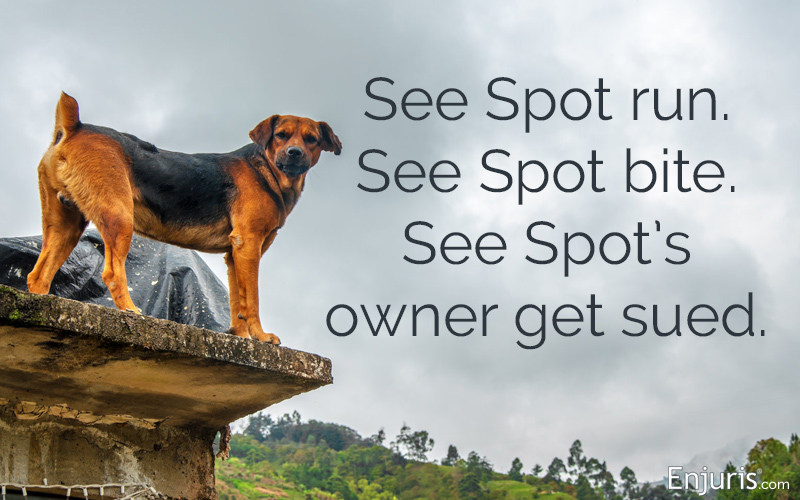 When can you sue for a canine bite or animal attack?

South Carolina is one of the strictest states when it comes to dog bite liability. Find out who can be held liable when a dog turns violent and what steps you should take if you or your child are injured by someone's pet.

The Centers for Disease Control and Prevention (CDC) reports that approximately 4.5 million dog bites occur in the United States every year, and 800,000 of those bites require medical attention.

In South Carolina, 45% of homes have at least 1 dog, which means the chances that you or someone you know has been bitten by a dog are pretty good.

Fortunately for dog bite victims, the Palmetto State has some of the strictest dog bite laws in the country.

South Carolina follows the strict liability law. This means that dog owners are liable for a dog bite even if their dog never bit anyone or showed any violent tendencies prior to the bite.

In South Carolina, dog owners are liable for a dog bite even if their dog never bit anyone or showed any violent tendencies prior to the bite. Tweet this

What’s more, South Carolina’s strict liability law holds dog owners liable for more than just dog bites. Under the law, a dog owner can be held liable for any damages caused when their dog “attacks” another person.

For example, if an owner’s dog jumps on a person and the person falls and breaks their arm as a result, the dog owner may be liable for the damages. In Elmore v. Ramos, the South Carolina Court of Appeals held that the dog need not have “evil intent.”

In other words, even if the dog jumps on a person because the dog is happy and trying to play with the person, the owner is liable for any damages that result.

Can someone other than the dog’s owner be held liable for a dog bite?

Yes. Under South Carolina’s dog bite law, anyone who has the dog in their “care or keeping” can be held liable for a dog bite. This may include a friend who is dog-sitting or someone hired to take the dog for a walk.

Because South Carolina follows the strict liability law, dog bite claims are pretty straightforward so long as the victim can prove that they were bitten by the dog. There are only a handful of defenses a dog owner can raise:

How long do you have to file a dog bite lawsuit?

The South Carolina statute of limitations limits the amount of time you have to file a lawsuit for certain types of cases.

For personal injury cases (including a lawsuit for damages based on a dog bite), you have 3 years from the date of injury or attack to file a lawsuit. If you fail to file your lawsuit before the deadline, you will be permanently barred from filing a lawsuit related to the injury.

In South Carolina, plaintiffs can recover the following types of damages in dog bite cases:

Real Life Example:Gloria lives in Spartanburg, South Carolina, where she keeps 2 Chow Chow dogs for security and companionship. Gloria hired Kevin to mow her lawn. Kevin informed Gloria that he would need to take his daughter, Valerie, with him.

While Kevin was mowing the lawn in the backyard, he heard a commotion and realized the Chow Chow dogs were attacking Valerie. He managed to get the dogs off Valerie and carry her into Gloria’s house.

Valerie was rushed to the hospital where she underwent surgery. Her injuries required a 3-day stay in the hospital and resulted in $6,850 in medical bills. The injuries emotionally disturbed Valerie to the point that her mother had to sleep in her room with the light on for 4 months. Her injuries caused permanent scars. What’s more, Valerie testified that she could no longer participate in volleyball, soccer, baseball, or basketball as she did before due to her injuries.

After a trial, the court awarded Valerie $6,850 in economic damages and $15,000 in non-economic damages. The court refused to allow punitive damages, explaining that there was no evidence that the dogs had ever attempted to attack anyone prior to attacking Valerie.

It’s common for dog bite victims to be friends or relatives of the owner of the dog that bit them. This can create a difficult situation in which the victim needs money for medical care but doesn’t want to sue the friend or relative.

Insurance may be the perfect solution to this problem.

Depending on the policy and the circumstances surrounding the dog bite, a dog owner’s homeowner’s insurance policy may cover liability arising from dog bites that occur on the owner’s property.

What’s more, proving that you saw a doctor soon after the dog bite will help any future lawsuit.

Step 2: Report the dog bite to the authorities

Regardless, it’s a good idea to report a dog bite to the authorities (police, animal control, or the health department). A record of a report will help your case if you later file a lawsuit. Plus, the authorities may conduct an investigation that could help support your claim.

If you’re able to do so, collect as much evidence of the attack as you can. This might include:

Remember, the statute of limitations for dog bite lawsuits is 3 years. However, it takes time to conduct an investigation and file a lawsuit. Accordingly, it’s important to meet with an attorney as soon as possible. Most initial consultations are free and your attorney will be able to help you preserve your rights.

If you need help finding an attorney near you, visit our free online legal directory.