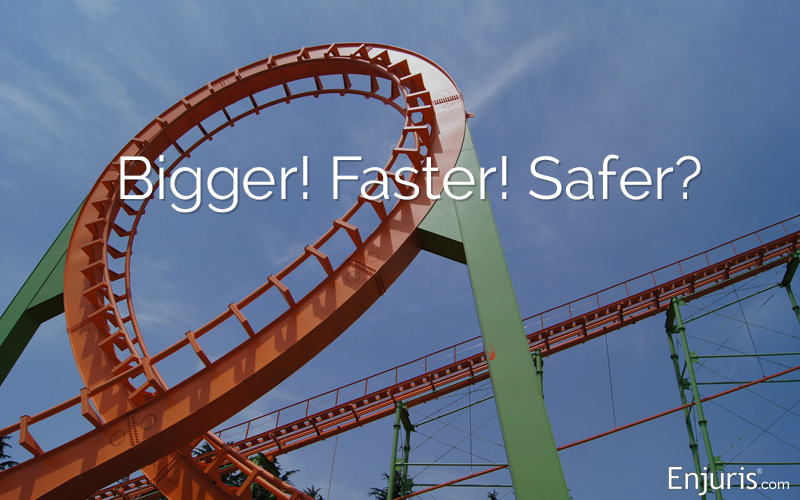 Although roller coasters are relatively safe, the fact that they’re getting taller, faster, and more extreme means that when accidents do occur they’re often catastrophic.

Every year, thousands of people in the United States are injured in amusement parks. Estimates of just how many people are injured vary wildly from 4,400 to 30,000 people.

“Right now it is hard to get a clear picture of what’s happening because there’s a patchwork system of regulation and enforcement,” said Tracy Mehan, a research manager at Nationwide Children’s Hospital in Ohio who conducted a 2013 study on child injuries at amusement parks. “We need a national injury reporting system for all mobile and fixed-site rides.”

Fatal accident statistics are kept periodically by the Consumer Product Safety Commission (CPSC). According to CPSC, 52 people died in amusement park rides between 1990-2004, but more recent statistics are not available.

Amusement park accidents injure anywhere from 4,400 to 30,000 people every year in the United States. It’s estimated that roughly 36% of these injuries are sustained on roller coasters.
Tweet this

People enjoy roller coasters for many of the same reasons they enjoy horror movies or bungee jumping. Roller coasters are a legal and generally safe way to experience the natural high associated with triggering your body’s fight-or-flight response.

Facing factsResearchers measured the heart rates of riders on the double-corkscrew roller coaster in Glasgow. Heartbeats per minute more than doubled from an average of 70 beforehand to 153 shortly after the ride had begun. Some older riders got uncomfortably close to what would be deemed medically unsafe for their age.

Unfortunately, roller coasters sometimes cross the line from providing the illusion of danger to exposing riders to actual danger.

CPSC conducted an in-depth investigation from 1990-2001 and found several leading causes of roller coaster injuries and fatalities. These include:

An investigation found that the accident was caused when a nut slipped loose from its bolt, permitting the brake shoe to settle on the track and derail the front car. The front car then dragged the following 3 cars with it as it plunged 35-feet.

“As soon as we started shooting backward everything went into slow motion,” said a passenger. “I turned around and saw the brakeman desperately trying to put the brake on but it wasn’t working. Most of the carriages didn’t go around the bend, one detached and went off the side through a wooden hoarding. People were groaning and hanging over the edge. It was awful."

Three of the most infamous roller coaster disasters of all time

Approximately four deaths occur on roller coasters every year in America. Here are 3 of the most infamous fatal roller coaster accidents:

“Back in the 1980s, our authority to oversee fixed-site rides was taken away from us,” said Scott Wolfson, spokesman for CPSC. “We do deal with mobile rides, like those at local carnivals, but we are a small agency, and it’s tough to oversee every fair that sets up for a short period of time.”

Most personal injury lawsuits involving roller coaster accidents are based on negligence or product liability claims. Let’s take a look at both.

A plaintiff in a roller coaster accident lawsuit based on negligence must establish that:

If an employee is negligent, the amusement park can be sued under the theory of respondeat superior.

Real Life Example:James Thomas Hackemer died in 2011 after he was ejected from the Ride of Steel, a 208-foot-tall roller coaster at the Darien Lake Theme Park Resort near Buffalo, New York.

James, a 29-year-old Iraq war veteran, had lost his legs and left hip to a roadside bomb in 2008. Nevertheless, James was strapped into the roller coaster with a fabric seat belt and T-shaped lap bar like all other riders. When the roller coaster dropped, James fell out of the car.

As he was falling, James hit the front of the car and then the track before landing about 135 feet below.

People without legs and people who lack sufficient body strength are barred from the Ride of Steel. Nevertheless, park employees failed to prevent James from boarding the roller coaster.

James’ family filed a wrongful death lawsuit alleging that park employees were negligent when they allowed James on the Ride of Steel.

James’ family ultimately settled with the amusement park for an undisclosed amount.

“The object of the litigation was always to look out for two daughters who lost a father,” said Denis Bastible, the lawyer for James’ estate.

Real Life Example:Anthony Theisen suffered a life-altering brain injury when he fell 17-feet from an indoor roller coaster at a Wisconsin Dells-area resort.

A lawsuit filed on behalf of Anthony alleged that the roller coaster had a defective lap bar that opened during the ride.

As part of a subsequent investigation, state investigators conducted a reenactment with dummies and sandbags and found that on the 12 lap bars in the ride, 4 of them failed.

The parties reached an undisclosed settlement and the roller coaster was permanently shut down.

Although some accidents are unavoidable, there are 5 steps you can take to lower your risk of being injured on a roller coaster:

Ready to talk to an attorney about your roller coaster accident claim? Find one near you using our free online directory.