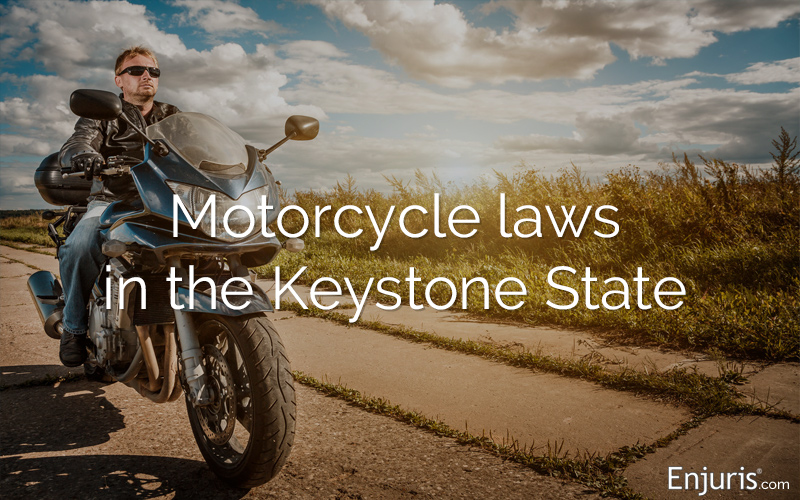 Know your rights and obligations in a motorcycle crash lawsuit

From the historic Grand Army of the Republic Highway to the Michaux State Forest Loop, Pennsylvania is crawling with scenic motorcycle-riding routes.

With so many beautiful routes, it’s unsurprising that there were 835,787 registered motorcycles in Pennsylvania in 2018. This number doesn’t include the motorcycles registered out-of-state that enter the Keystone State to visit sights like Gettysburg and the beaches of Presque Isle.

Unfortunately, Pennsylvania regularly finds itself in the top 10 states for motorcycle accidents.

Let’s take a look at what you need to know if you’re involved in a motorcycle crash in Pennsylvania.

A number of studies have examined the causes of motorcycle accidents in the US. Most of these studies found that the vast majority of motorcycle crashes occur at intersections and result from human error (attributed either to the motorcycle rider or the driver of another vehicle).

A small percentage of crashes are the result of vehicle problems (such as mechanical defects) or environmental factors (such as adverse weather).

A study conducted by the National Transportation Safety Board examined the risk factors associated with motorcycle crashes across the U.S. and found the following data: 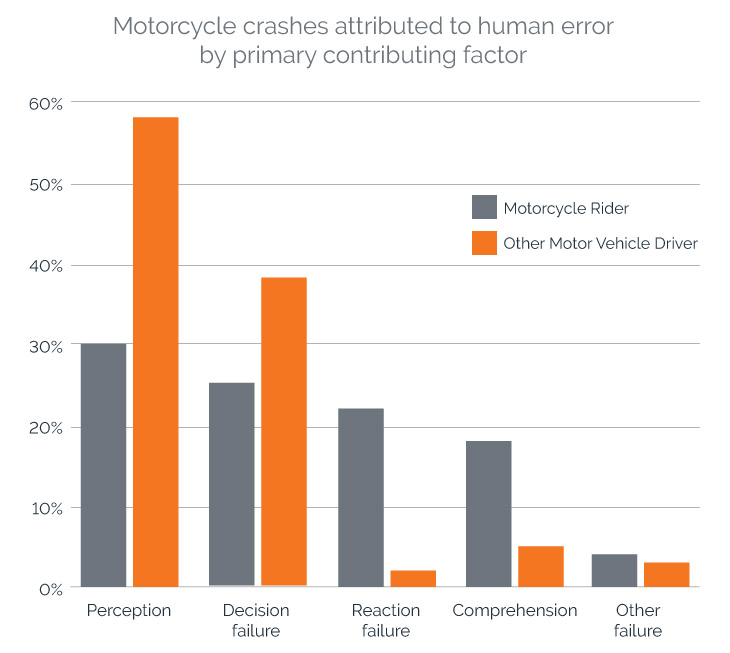 Is drunk driving a problem among motorcyclists in Pennsylvania?

Yes. In 2018, motorcyclists had the largest percentage of intoxicated drivers involved in crashes.

In general, motorcyclists have the same rights and duties as other motor vehicle drivers. However, Pennsylvania has passed a number of laws specifically designed to keep motorcyclists safe. Most of these laws can be found in Chapter 35 of the Pennsylvania Vehicle Code.

Let’s take a closer look at a few you should know before you get behind the handlebars.

If you suddenly decide you want to ride a motorcycle, you can’t just purchase a brand new Harley Davidson, tuck your regular driver’s license into your wallet, and pop a wheelie.

To operate a motorcycle in Pennsylvania, operators must have a valid driver’s license with a Class M designation, or have a valid motorcycle permit while riding with an approved supervisory rider.

Enjuris tip: To obtain a Class M license in Pennsylvania, follow these steps outlined by PennDOT.

Pennsylvania requires most motorcyclists and their passengers to wear protective headgear that meets the U.S. Department of Transportation (USDOT) Standards (indicated by the “DOT” sticker on the helmet).

Only the following people are not required to wear a motorcycle helmet in Pennsylvania:

Facing factsSome motorcyclists believe that helmets don’t do any good in the event of a crash. This is simply not true. Research conducted by the National Highway Traffic Safety Administration (NHTSA) found that helmets reduce the risk of death by approximately 37%.

NHTSA estimates that helmets saved the lives of 1,870 motorcyclists in 2017, and that 750 more lives across the country could have been saved if all motorcyclists had worn helmets.

Lane splitting is when a motorcyclist rides between 2 lanes of cars heading in the same direction.

Motorcyclists generally split lanes on the highway when traffic slows, but some riders also split lanes in order to filter to the front of traffic at a stoplight.

In Pennsylvania, lane splitting is strictly prohibited. Specifically, no person is allowed to operate a motorcycle between lanes of traffic or between adjacent lines or rows of vehicles.

For motorcyclists, lane splitting is prohibited in Pennsylvania. Tweet this

Other rules for motorcyclists

Other important “road behavior” motorcycle laws in Pennsylvania include:

No-fault and fault-based insurance systems refer to a state’s rules for how a motorcycle accident victim is required to handle the claims-filing process.

Pennsylvania is different than most states because it doesn’t have a no-fault or fault-based system.

There are advantages and disadvantages to each type of coverage. The most important thing to keep in mind is that, with very few exceptions, you can’t file a lawsuit against the at-fault person if you have no-fault insurance. Instead, you’re limited to filing a claim with your own insurer.

Just like other motor vehicle drivers, all motorcyclists in Pennsylvania are required to carry liability insurance. Liability insurance covers bodily injuries and property damage caused by the insured individual and sustained by someone other than the insured.

The required minimum amounts of liability coverage in Pennsylvania are:

Enjuris tip: Learn more about Pennsylvania insurance requirements, including what happens when you’re hit by an uninsured driver.

Who’s liable in a motorcycle accident?

Assuming you have fault-based insurance, you’ll want to know who’s at fault following a motorcycle accident.

Examples of actions that might result in a motorcyclist or motor vehicle driver being found negligent include:

What happens if both the plaintiff and the defendant are at fault for a motorcycle accident?

Pennsylvania follows the modified comparative fault rule. Under this rule, the plaintiff’s damages are reduced by the plaintiff’s degree (or percentage) of fault. What’s more, if the plaintiff is more than 50% at fault, they are prohibited from recovering any damages.

Motorcyclists are much more likely than passenger car occupants to die or become seriously injured in a crash.

Facing factsOlder riders appear to sustain more serious injuries than younger riders. A Brown University study found that declines in vision and reaction time, along with the larger-sized bikes that older riders favor (which tend to roll over more often), are the likely causes.

What damages are available in a motorcycle accident?

If you’re injured in a motorcycle accident in Pennsylvania, you can seek both economic and non-economic damages.

Economic damages have a price tag, and include compensation for costs such as:

Non-economic damages don’t have a specific dollar value, and include reimbursement for:

The term “statute of limitations” refers to a law that sets a time limit on your right to file a lawsuit. If you fail to file your lawsuit within this time limit, your case will be dismissed.

In Pennsylvania, most motorcycle accident lawsuits (whether based on property damage or physical injuries) must be brought within 2 years of the accident.

PennDOT offers 4 general tips for staying safe on a motorcycle:

If you or a loved one has been injured in a motorcycle crash, don’t risk missing out on receiving the compensation you deserve. Use our free legal directory to locate an experienced Pennsylvania attorney in your area.