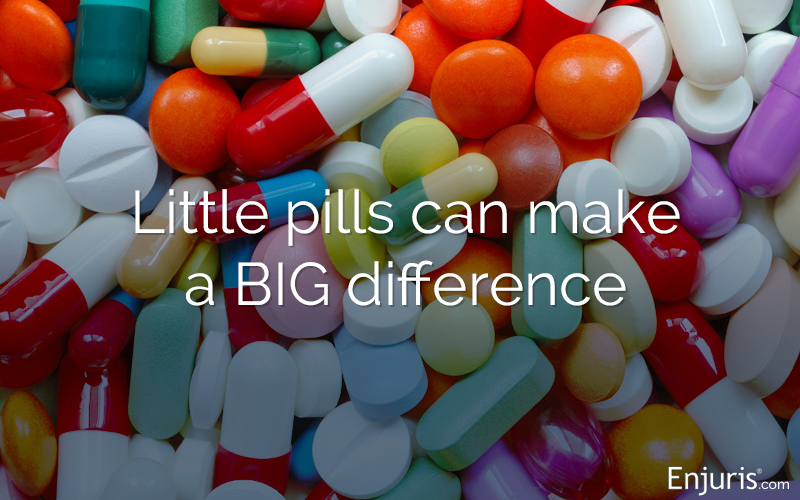 What to do when your meds make you sick

Table of Contents + show
What to do when your meds make you sick
Drug recalls
Types of drug defects that lead to a pharmaceutical lawsuit
When you can file a product liability claim
Pharmaceutical malpractice: suing a doctor or pharmacist in North Carolina
Who can be liable for a defective drug?
Legal options for a pharmaceutical liability lawsuit
Everyone’s body is different, and there’s often no way to know how a person will respond or react to a particular drug or treatment. But physicians and drug manufacturers have a responsibility to warn you about known serious side-effects when you begin a new medication.

Whether you take an occasional over-the-counter medication for a short-term sickness or you’re on life-saving medication for an ongoing condition, you might feel grateful that there are so many options for drugs and pharmaceutical treatments for a wide variety of medical conditions.

The vast majority of drugs and treatments are safe when used correctly. Big Pharma is one of the most tightly regulated industries, and most manufacturers take safety seriously. All medications or treatments must go through rigorous testing before they go to market.

However, even though a drug can’t be sold until it passes approval by the Food & Drug Administration (FDA), sometimes the tests don’t uncover long-term risks. In addition, there are times when a tried-and-true drug that’s otherwise safe becomes contaminated during production or there’s some other manufacturing defect that’s not discovered until it gets to market, and that can leave people injured or ill.

Pharmaceutical liability isn’t just about drugs — it also covers implants and other medical devices such as those used in breast implants, hip replacements, knee replacements, spinal fusions, and other treatments.

A drug recall is when a company voluntarily removes a defective drug from the market.

Sometimes the company discovers a defect and removes the drug on its own. Other times, the FDA requests that the company pull the drug from the market.

There are 3 classifications of drug recalls:

Class I: The product is dangerous or defective and could cause serious health problems or death.

Class II: The product might cause a temporary health problem or pose a slight risk of a serious problem.

Class III: The product is unlikely to cause any health problems but violates FDA labeling or manufacturing laws.

What leads to drug recalls?

Real Life Example: In June 2020, Children’s Robitussin was recalled by manufacturer GSK Consumer Healthcare because the dosing cup was incorrect, which could lead to a parent administering the wrong amount to their child.
Enjuris tip: What do you do if your medication is recalled? Call your pharmacy or bring back the medication. They will refund or replace a recalled product. You can also call your doctor, who can prescribe an alternative or help you to handle your symptoms if you’ve had an adverse effect.

Types of drug defects that lead to a pharmaceutical lawsuit

Most defective drug cases fall into the 1 of the following 3 categories:

When you can file a product liability claim

The basis for any personal injury lawsuit is that you were injured by another person or company’s negligence. The fact that you were taking a particular drug when it was recalled isn’t enough reason to file a claim if you weren’t actually injured by the circumstances of the recall.

You might be able to file a claim if you were injured because:

There are a few aspects to this. First, not every medication works the same way on every person. We’ve all tried a drug that didn’t do what it was supposed to, and your doctor might tell you to try something else instead.

Along those same lines, most drugs and medical devices come with a lengthy list of potential side-effects. Your doctor isn’t required to inform you about every possible side-effect, but they should advise you about any that might be more likely for you because of your specific medical condition or history.

For example, if you begin a new medication and begin to experience joint pain, it could be because it’s a known side-effect, or it could be that it’s how your body reacts to that particular drug. Either way, it’s not a defect or product failure — it just means it’s not the right drug for you and you might need something different.

In those situations, you would not likely recover compensation in a legal claim. But, if you have a device like a hip implant and it fails or breaks and doesn’t work the way it’s supposed to, you might have a claim for a product failure in that instance.

There are newly discovered long-term effects

If you’re taking a drug that has been on the market for decades (and maybe you’ve been taking it for decades) and you begin to experience a symptom or effect that’s being reported as correlated with the drug, that’s worth exploring further.

How do you know if you’ve been injured by a defective drug?

If you start taking a particular drug and begin to experience symptoms that are unusual or unexpected, you should contact your doctor immediately.

However, if you’ve been taking a drug or had a device implanted for a long period of time, it’s harder to link your symptoms to the pharmaceutical.

Any change in your medical condition is worth a call to your doctor. When you visit the doctor, be sure to tell them:

Enjuris tip: If you think what you’re experiencing is linked to a drug you’re taking, don’t be afraid to say so to your doctor. They might say it’s not the cause, and you might have something else going on. But if it is related, they’ll explore that possibility.

Not every doctor stays current on the latest research about every drug, interaction, or side-effect. If your doctor dismisses your concerns, you’re always able to seek a second opinion.

Making your legal claim for a defective drug or device

If you file a claim for a defective drug or device, be prepared to answer these questions:

If you can answer “yes” to these questions (and believe there’s evidence to support it), then you should call a lawyer who can help you file a North Carolina pharmaceutical liability lawsuit.

Pharmaceutical malpractice: suing a doctor or pharmacist in North Carolina

In most of these situations, the injury was caused not by the drug, itself, but by the provider. That means it becomes a pharmaceutical malpractice claim and not a defective drug claim.

Who can be liable for a defective drug?

Can I protect myself from being injured by a defective drug?

In some instances, a drug-related injury will be out of your control, especially if it’s a side-effect that’s discovered after you’ve been taking it for a while.

But there are ways to protect yourself against drug-related mistakes:

North Carolina adheres to a negligence standard in product liability cases. That means the plaintiff must prove that:

It’s also important to note that North Carolina follows the contributory negligence model. If the plaintiff (the injured person) contributed to their own injury in any way, no matter how small, they may not recover damages in a personal injury lawsuit. In a drug liability lawsuit, that might mean you took the medication for a longer or shorter period of time than it was prescribed, took more or less than prescribed, or even that you failed to store or maintain the medication in the manner specified in the instructions.

Sometimes a doctor will prescribe a medication for “off-label” use. That means it’s being prescribed to treat a condition that is different from what it was approved for by the FDA. This is legal, but if you are injured while taking a medication for an off-label use, it might limit your ability to make a claim.

Enjuris tip: North Carolina requires the parties in a personal injury lawsuit to submit to mediation in order to try to reach a settlement prior to trial.

Pharmaceutical liability is a very complicated area of law. Often, the companies involved have deep pockets and will spare no expense to defend themselves in a lawsuit. Now that doesn’t mean you can’t recover compensation for your injuries... it just means it’s not an easy road ahead.

If you believe you’ve suffered an injury or illness as a result of a defective pharmaceutical drug or device, it’s important to contact a lawyer right away. An experienced North Carolina pharmaceutical liability lawyer is the best person to review your claim and advise you of your legal options for compensation.